Autism Spectrum Disorder (ASD) is a neurodevelopmental disorder characterised by social communication difficulties, restrictive and repetitive behaviours and sensory anomalies (DSM-5, 2013). Whilst there is a body of literature demonstrating motor difficulties in ASD (Ming et al., 2007), comparatively this domain has received little attention. This seems an oversight given the important cascading effects that have been linked to motor delays in ASD (Bedford et al., 2016; Leonard et al., 2014).

In this study, we report findings from a prospective longitudinal infant sibling study (infants at a higher familial likelihood of developing ASD – ASD-L and/or ADHD – ADHD-L, compared to a Control – CTL - group). We examined a specific manual behaviour; midline crossing. Midline crossing refers to the act of placing one’s hand in the contralateral side of space, thus crossing the body midline. These behaviours are important as they can elucidate the relationship between motor behaviours and hemispheric specialisation/brain maturation (Morange & Bloch, 1996; Provine & Westerman, 1979).

164 infants (29 CTL, 91 ASD-L, 44 ADHD-L) at 5-, 10- and 14-months took part in this study. Infants were seated in a high chair and were presented with blocks to play with for 3 minutes. Video data was coded offline for every manual movement that infants engaged in. Broadly, behaviours were coded with respect to three categories: reaching, hand movements and object manipulation. Of particular importance was whether these manual movements involved crossing the body midline (if the movements occurred in the ipsilateral or contralateral side of space to the usual placement of the hand, with the right hand acting in the left side and vice versa).

Our findings show that, at 10-months, infants at familial risk for ASD or ADHD perform significantly fewer midline crosses compared to CTL infants. This provides evidence of motor differences between the familial risk and typically developing groups, albeit at a specific time point in the first year of life. Somewhat surprisingly, midline crossing seems to be independent of gross and fine motor skills. This has important implications in terms of the relationship between motor and multisensory spatial development. Further, we discuss the potential cascading effects of these early differences with respect to how infants process, and engage with, the world around themselves. 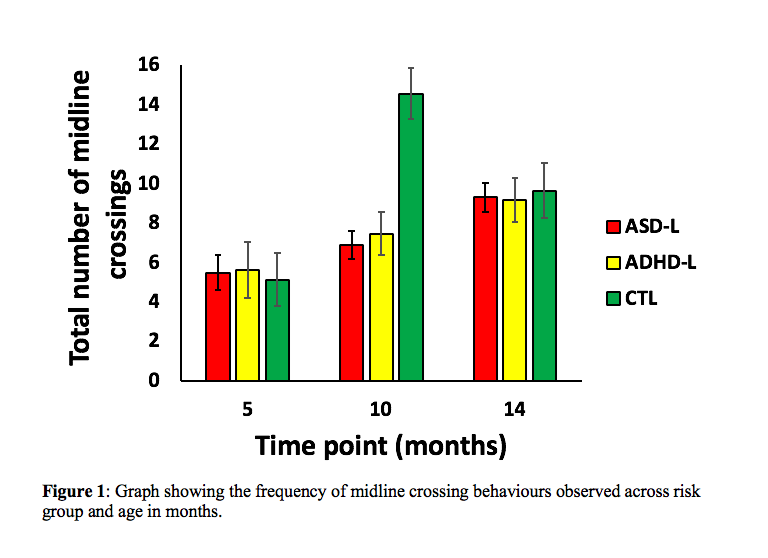