Objectives: 1) Examine whether the biopsychosocial model described above has good fit in describing factors related to sexual minority orientation and 2) if these factors have different explanatory power for individuals with and without the BAP.

Methods: The demographics questionnaire contains questions concerning participant’s age, birth gender, gender identity, race, religion, family income, parent’s education, respondent’s education, and formal ASD diagnosis. The Broad Autism Phenotype Questionnaire (BAPQ) is used to assess for characteristics of the BAP. The Autism Spectrum Quotient-10 (AQ-10) is used to assess symptoms relating to ASD. The Klein Sexual Orientation Grid (KSOG) is used to provide an estimate of each participant’s present and ideal sexual orientation and preferences. The factors from the Worthington et al. (2002) model are measured as follows: biological, number of sexual minority family members; social contextand culture, a modified version of the Sexual Prejudice Scale (SPS); religion, Religious Orientation Questionnaire-Intrinsic (RIQ); gender norms and socialization, the Attitudes Toward Women Scale (AWS) and the Male Role Norms Inventory-Short Form (MRNI-SF); and systematic homonegativity, Daily Heterosexist Experiences Questionnaire (DHEQ). Structural Equation Modeling (SEM) will be used to determine the relationship between the observed and latent variables and to test the fit of the proposed model in each of the groups.

Results: After one month of data collection, 43 responses that met criteria for inclusion (sexual minority, ages 18-30, complete data, no ASD diagnosis) have been collected. Collection of a further 157 responses is planned over the next four months to obtain a final N of 200 (100 individuals in each group). Preliminary data from a subgroup of 30 individuals (Mage=22.46,19 female, 6 male, 5 transgender/genderfluid/genderqueer) revealed a positive correlation between sexual orientation and BAP traits as has been found in previous literature, r= .38, p< .05 (Qualls et al., 2017). These results should be interpreted with caution due to small sample size but are promising.

Conclusions: It is predicted that the biopsychosocial model will have adequate explanatory power for both groups. It is further predicted that while biological factors will be similar between the groups, there will be differences in psychological and social influences. Results from this study will help further define the unique characteristics of sexual minority orientation in individuals with the BAP. 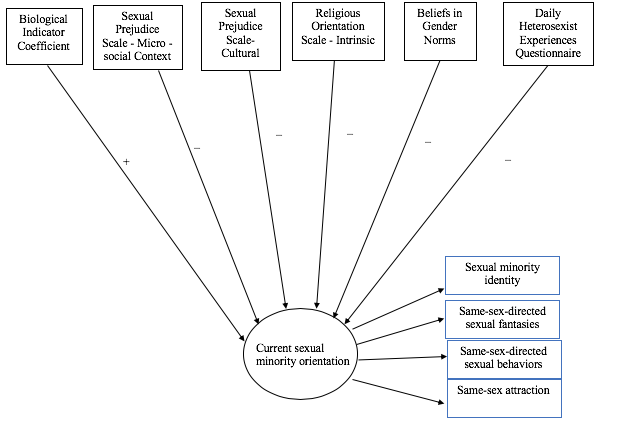