30656
A Family Study of Sensory Processing in Autism Spectrum Disorder

Objectives: To examine sensory processing in individuals with ASD and their parents, and explore relationships with clinical behaviors impacted in ASD and the BAP.

Methods: Twenty-four individuals with ASD, 18 proband controls, 50 parents of individuals with ASD, and 29 parent controls completed three measures of sensory processing – a self- and parent-report measure of sensory processing styles, an objective measure of tactile detection, and a measure of visuotactile-proprioceptive integration (“rubber hand illusion”). In the rubber hand illusion task, participants observed a rubber hand being stroked simultaneous to their own hand, which was obscured from their view. Typically, this results in a subjective feeling of embodiment of the rubber hand and estimates of one’s real hand as having drifted towards the direction of the rubber hand (i.e., proprioceptive drift). The brushing was administered in two separate three-minute blocks per condition and proprioceptive drift was measured by subtracting the average estimate of hand location at baseline from the average estimate at each block. Participants also completed measures investigating clinical behaviors impacted in ASD and the BAP (e.g., social communication, social cognition).

Conclusions: Findings contribute to a growing body of literature documenting atypical sensory processing and inefficient, rather than deficient, integration of visual-tactile-proprioceptive stimuli in ASD. Notably, the lack of differences observed in parents suggest that sensory processing does not to relate to the BAP or genetic liability observed in relatives. While few relationships were observed between measures of sensory processing and clinical features of ASD, findings do suggest that atypicalities in visuotactile-proprioceptive integration in ASD relate to higher-order impairments in social communication. 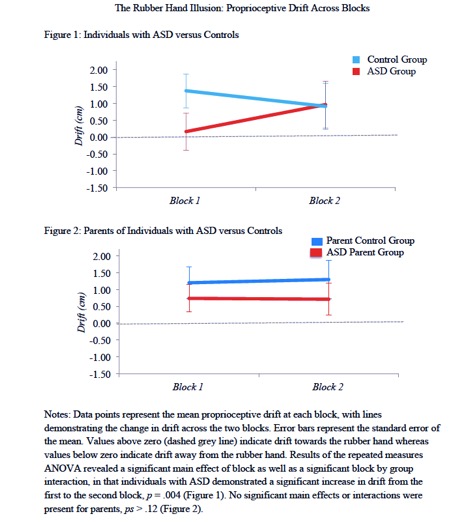