Simons Searchlight (formerly Simons VIP) is an online registry collecting data on rare genetic conditions associated with autism and other neurodevelopmental disorders and includes over 50 monogenic conditions. Seizures are a frequent comorbidity in these conditions and is of great interest to both families and the research community, but epilepsy has not been well characterized since most have only been described in the last 2-4 years.

14 of the 16 monogenic conditions with data available in Simons Searchlight are known to have co-occurring seizures in some individuals. 113 participants with a history of seizures and pathogenic or likely pathogenic variants were included in this study. The Medical History Interview (MHI) was administered to families by a licensed genetic counselor and assessed seizure characteristics. An online parent-report seizure was also administered.

Within the monogenic conditions with seizures as a known comorbidity, 113 (39%) of participants reported one or more seizures. The sample population was evenly divided between females (49%) and males (51%). 35% of the participants have SCN2A mutations. The prevalence of seizures varies from 8% (MED13L) to 63% (SCN2A). The average age at onset across seizure types and gene groups was 22 months, ranging from the neonatal period to 12 years. Average age of seizure onset varied from 7 months (infantile spasms) to 2.8 years (drop attack).

74% of those participants with simple partial seizures reported achieving seizure control at the time of the most recent medical history interview. In contrast, 95% of those with complex partial seizures had achieved control. In examination of medication treatments, no one medication emerged as most effective in controlling seizures within any one genetic condition.

Comparisons across rare gene conditions provides insights into seizure phenomenology. Some neurogenetic conditions have higher penetrance of seizures, such as STXBP1, SCN2A, and SYNGAP1. Grand mal seizures are observed in almost all of the groups and is the most frequently reported seizure type. In contrast, infantile spasms are reported in only 4 genes, and 93% of those with infantile spasms had mutations in SCN2A or STXBP1. This could be evidence of an underlying biological mechanism uniquely predisposing to spasms for certain genes. There also appear to be trends in the age of onset by gene. More data are needed to determine what treatments are most effective for each gene. 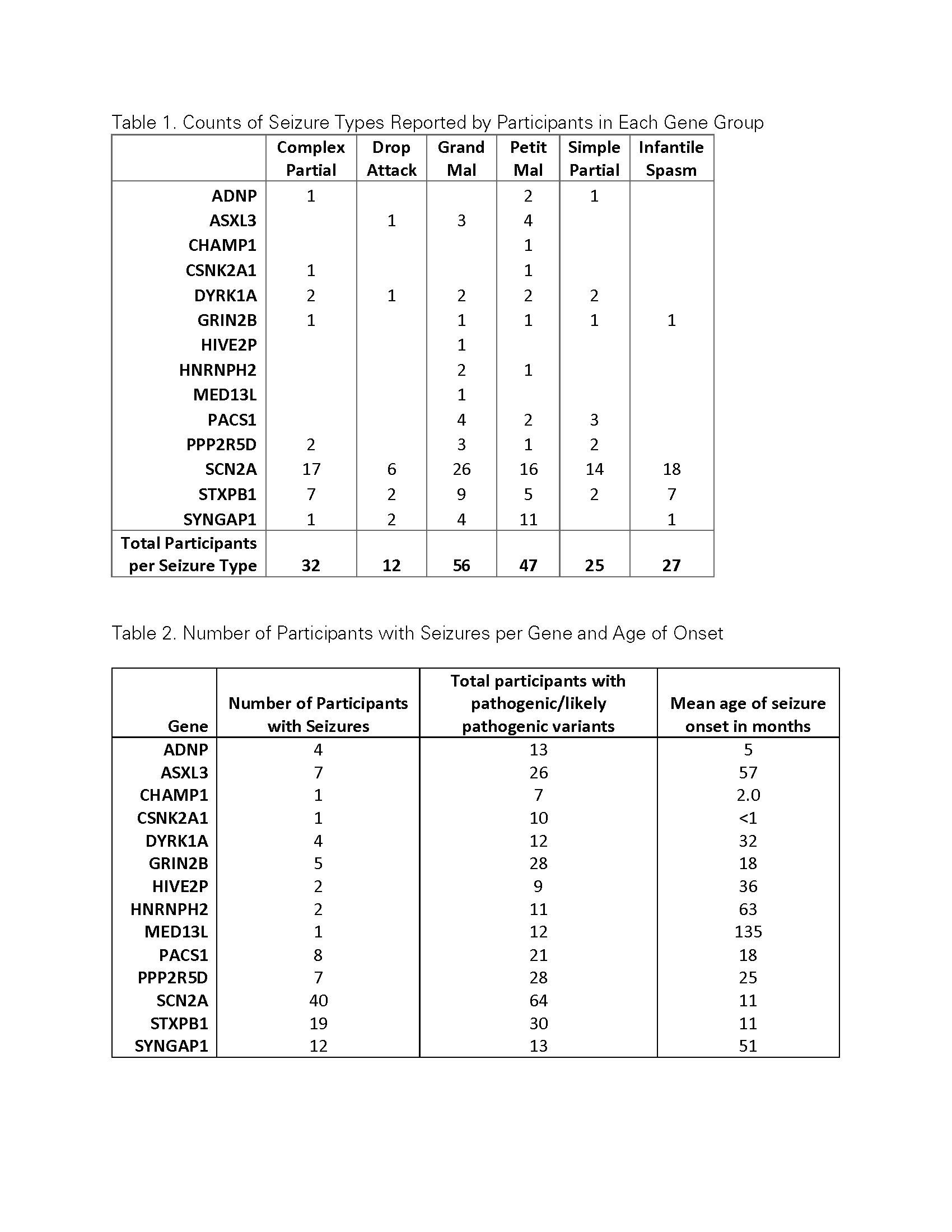