30821
Circumscribed Interests in Autism: Are There Sex Differences?

Turner-Brown et al. (2011) found that circumscribed interests (CI) in ASD were more nonsocial, less age-appropriate, less functional than the interests of typically developing (TD) peers; yet, their sample was only 5% female. Sex differences in CI may contribute to delayed diagnosis or misdiagnosis for females on the spectrum. Therefore, it is important to characterize sex differences in CI to determine if differential approaches to assessment and intervention are warranted for females and males with ASD.

This study aimed to replicate and extend the findings of Turner-Brown et al. (2011) by examining sex differences in parent-reported quantity, content, and functional impairment of children’s interests.

The Interests Scale (Bodfish, 2003) is a parent-report measure of children’s CIs. Parents indicate whether or not their child is currently or has ever been interested in 39 common categories of interests. Then, parents write down their child’s primary interest and answer seven questions about the amount of functional impairment associated with that interest. Higher ratings on these items indicate greater severity of functional impairment. Cronbach’s alpha for this sample was .81 for items measuring functional impairment of the child’s primary interest. Individual item internal consistency ranged from .74-.82.

Groups were comparable on the quantity of interests reported on the Interests Scale F(1,86) = .44, p≤.51, η2 = .00 . Children with ASD demonstrated significantly more nonsocial interests F(1,86) = 7.87, p≤.01, η2 = .08 and had significantly greater functional impairment associated with their interests on all seven parent ratings than TD children (see Table and Figure). A significant diagnosis*sex effect was found for the number of interests in the traditionally female category of Folk Psychology with TD females having the greatest number of Folk Psychology Interests compared to the other groups (F (1,86) = 5.20, p ≤ .03, η2 = .05), followed by TD males and ASD males. ASD females had the fewest current interests in Folk Psychology and were more similar to ASD males and TD males than their TD female peers.

These findings replicated the results of Turner-Brown et al. (2011) in a sample that was balanced by biological sex (51% female compared to 5%), indicating that some aspects of the content and functional impairment of CI are characteristic of the autism phenotype regardless of sex. Even if the interests themselves may be different across sexes, the impact on daily life for children and their families is the same. Regarding sex differences, there was a significant diagnosis by sex effect for the number of current Folk Psychology interests. Females with ASD demonstrated the fewest interests in this category and their interests were more closely aligned to males with ASD than to TD males or TD females supporting the “Extreme Male Brain Theory” of autism (Baron-Cohen, 2010). 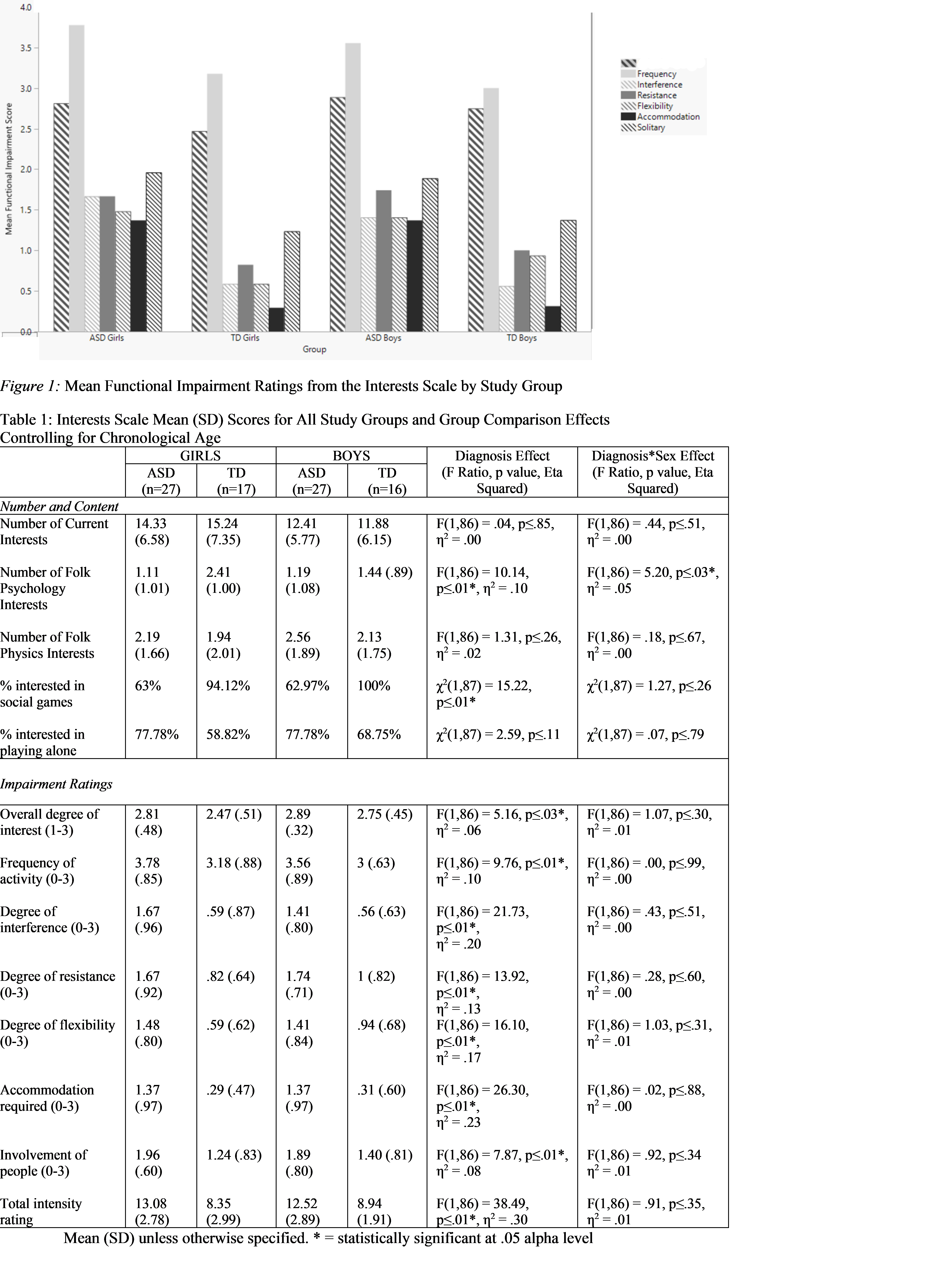