Objectives: Given that ASD traits and symptoms exhibit a continuous distribution in nature, we conducted a quantitative analysis of monozygotic twin-twin differences in autistic trait severity in a large sample of identical twins with and without ASD (n=347 pairs).

Results: Probandwise concordance for MZ pairs in which the proband was clinically-affected by ASD was 91% by research diagnosis, lower by community diagnosis; four out of five MZ pairs confirmed discordant by research diagnosis were female. The SRS-2 mean scores for clinically-affected twins were pathologically shifted approximately 3.5 standard deviations in comparison to the twins ascertained from the general population. MZ twin-twin difference scores exhibited a continuous distribution in each group (Figure 1), with pairs from the general population (Panel A1) spanning a much narrower range of differences than the clinical groups (Panels A2 and A3). MZ twin-twin intra class correlations were markedly higher in the general population (0.86) than among clinically-affected pairs (0.42), suggesting that much of the SRS-2 measured variation in symptom severity above the threshold for clinical diagnosis is unrelated to the heritability of the condition itself. Many MZ pairs lie on opposite sides of a diagnostic threshold (Panel B), yet generally differ by less than 1.5SD of the SRS-2 measurement. There were no age effects on MZ twin trait correlations, and for presumed discordant pairs, the magnitude of difference was comparably reflected by the SRS-2 and ADOS (Panel C).

Conclusions: These findings support very substantial heritability for ASD, with symptom burden distributed across a continuous severity gradient that extends to the general population. Extreme discordance for autistic trait burden in MZ twins is rare, and its frequency is inflated when diagnosis relies exclusively upon community ascertainment. Although both autism and autistic trait variation in the general population are strongly genetically influenced, inter-individual variation in severity above the threshold for diagnosis may be significantly affected by non-shared environmental factors, possibly operating early in life, and incurring random deviations from an identical co-twin’s social developmental trajectory. This has major implications for biomarker studies involving clinical subjects, and for the elucidation of non-inherited factors that may exert enduring influences on the severity of clinical autistic syndromes 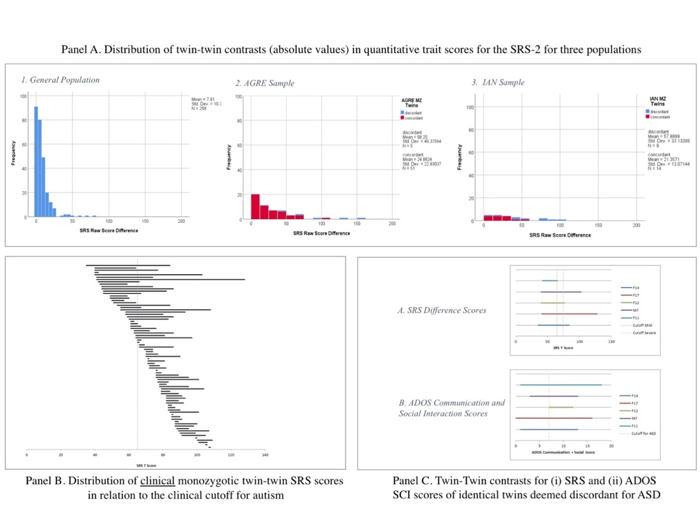