Background: Absolute pitch (AP) and Autism Spectrum Disorder often co-occur in individuals, are both heritable, and are associated with atypical brain connectivity (Mottron, 2013). Previous attempts to explain these similarities in terms of locally-biased perceptual processing have had limited success. Low cognitive flexibility and greater sensitivity to sound may better explain the relation between autistic traits and possession of absolute pitch. Here, we examine to what extent such a profile is associated with atypical functioning of the fronto-insular salience network (Uddin, 2013), which plays a role in integrating external sensory information to coordinate goal-directed behavioural responses and may provide a unifying framework for the co-occurrence of AP and autism.

Objectives: We investigated functional brain connectivity using resting-state fMRI in salience and default-mode networks (DMN) in musicians with and without AP, and investigated individual differences in autistic traits and salience network connectivity.

Methods: 120 musicians completed an online survey about their musical experience, possession of absolute pitch and autistic traits as measured by the Autism Spectrum Quotient (AQ, Baron-Cohen, 2001). A subset (n=32) with and without AP (AP=17, non-AP=15), matched on age (mean=24±6 years) and years of musical training (mean=18±5 years), completed a musical discrimination task (Wallentin, 2010), the Wechsler Adult Intelligence Scale (Wechsler, 1939), and resting-state functional MRI in a 3T scanner while viewing a fixation cross. Connectivity of the salience network (seeded in the fronto-insular region) and DMN, using seed-to-voxel connectivity was estimated using the CONN toolbox in SPM12. Group differences in brain connectivity between AP and non-AP possessors are reported at p<.05, false-discovery-rate corrected (FDR). AQ-connectivity relationships were assessed within (regression) and between (ANCOVA) AP and non-AP groups.

Results: The AP musicians had AQ scores in a higher range (17±7) than the non-AP ones (15±5) although the difference was not statistically different (p=.2). Participants did not differ in melody or rhythm discrimination (mean percent accuracy=84±5, p=.7) nor on full-scale IQ (mean=113±14, p=.5). Seed-based elicitation of salience network connectivity co-occurred with decreased correlations with the posterior default mode network in both groups (Fig.1). The AP group contrasted against the non-AP showed hyperconnectivity of the salience network, particularly with DMN regions in the posterior cuneal and occipital cortex (p<.05-FDR corrected, Fig.2a), but no differences in the DMN itself. These differences in salience network connectivity were positively related to AQ score within the AP group (p=.04, Fig.2b) but not the non-AP group (p=.14).

Conclusions: Individuals with AP show increased connectivity in the fronto-insular salience network which is predicted by their AQ score. The hyperconnectivity of SN occurs in combination with reduced suppression of the DMN. Reduced dynamic switching between these large-scale networks can impair cognitive flexibility (Menon, 2010) and might explain common features of both AP and autism. Although there is tremendous heterogeneity in executive functions in both AP and autism, these findings provide support for further investigation of cognitive flexibility and salience network connectivity to account for their co-occurrence in a subgroup of individuals. This link from physiology to perception and cognition in turn can provide further avenues for fractionating the ASD phenotype. 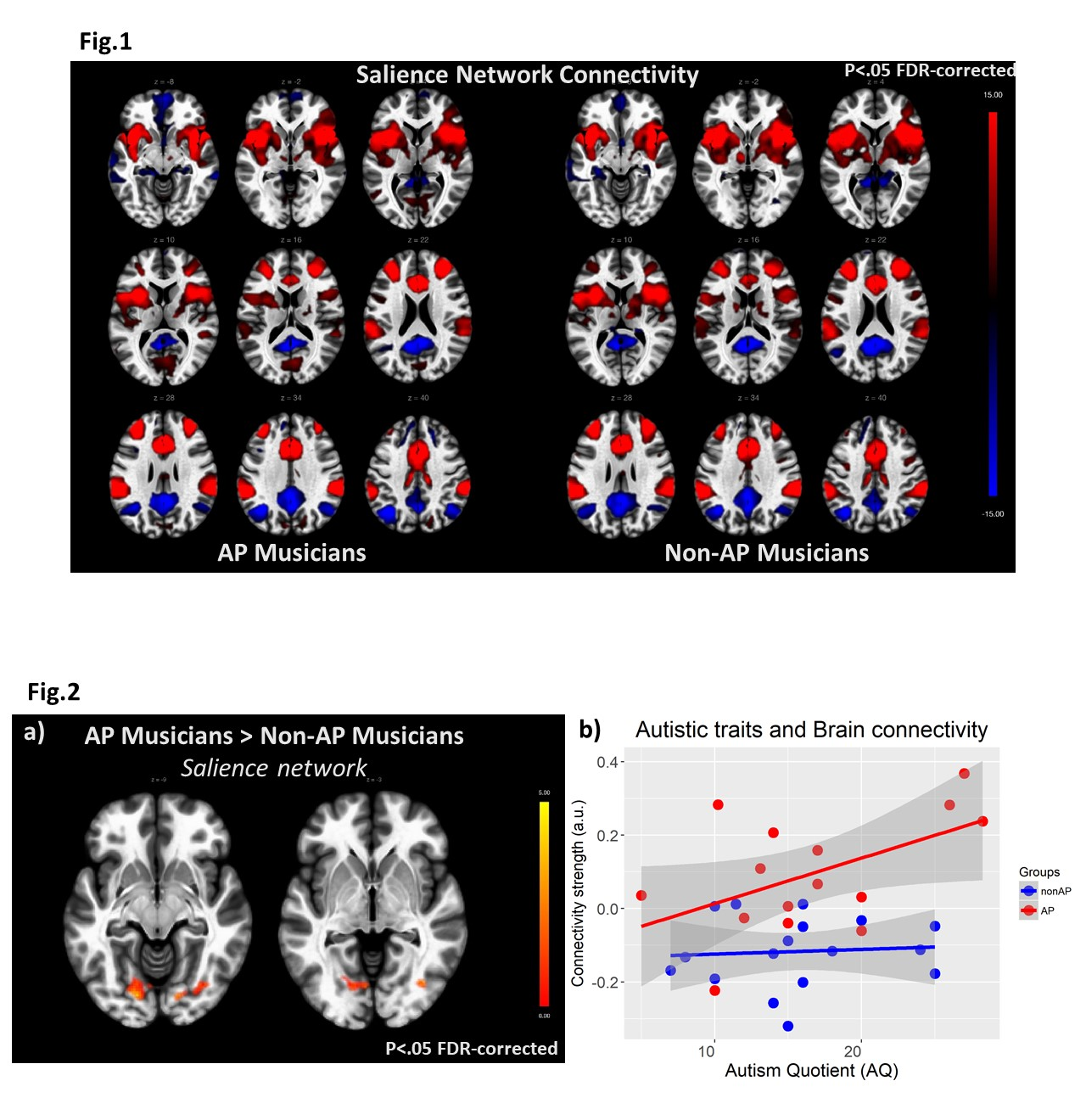