30871
Specific Association between at-Rest Alpha Power and Restrictive and Repetitive Autistic Traits: Replication and Extension in a Clinical Sample

Objectives: We aimed to replicate and extend previous work by: (1) testing for a positive association between alpha power in the parietal region and restricted and repetitive traits in a sample of typically developing (TD) adolescents (N=61; 34 males, mean age= 13.07, mean IQ= 106.97); (2) examining this relationship in a clinical cohort of adolescents with ASD (N=91; 70 males, mean age= 13.67, mean IQ= 101.70) and by differentiating between low (6-8Hz) and high (8-12Hz) alpha.

Linear regression was used to test the association between RRB traits and low and high alpha power in the TD and the ASD samples separately. Where significant associations were found, age, IQ and sex were included as covariates. Following from this, multivariate regression assessed both topographical and oscillatory specificity. Ongoing analyses examine (1) the relationship between other indices of alpha (e.g., peak alpha frequency) and RRB traits and (2) RRB traits, alpha power and anxiety, measured by the Childhood Behaviour Checklist (CBCL) and Childhood Anxiety Sensitivity Index (CASI).

Results: No associations were found in the TD group, likely reflecting a restricted range in SRS scores (range of 41-66 in the TD group vs. range of 45-110 in ASD group on the RRB subscale). Consistent with prior work, a positive association between parietal alpha power, specifically in the low frequency band, and RRB traits was observed in the ASD group (p=0.02; Figure 1), which remained when covariates were included in the model (p=0.03). A comparable association between RRB traits and low alpha power to that reported in the parietal region was found in the central (p=0.02), but not in the frontal or occipital regions. No significant associations were found between delta, theta, beta or gamma power in the parietal region and RRB traits.

Conclusions: Consistent with prior findings for autistic traits in adults, we found a positive association between lower alpha power in the parietal region and RRB traits in a clinical sample of youth with ASD. Contrary to our previous work in adults, we did not observe this relationship in the TD sample; this may reflect the constrained range of RRB traits observed in the sample, or it may suggest that the effects represent a developmental phenomenon emerging in later adolescence or early adulthood. 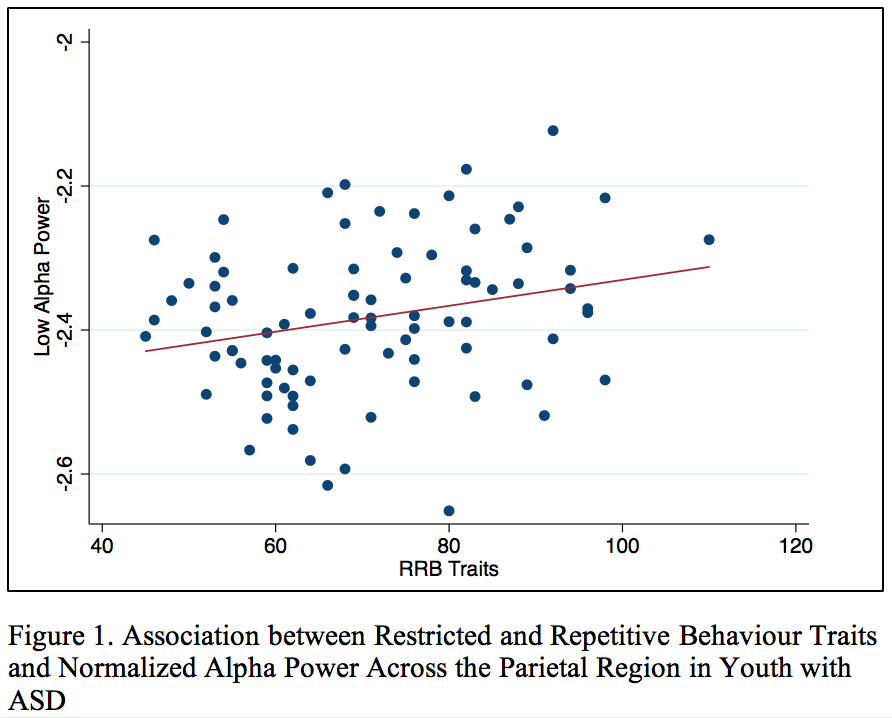