Objectives: The primary objective of the current study was to provide the first insights into combined behavioural and psychophysiological markers of social rejection in autistic adults. A secondary objective was to relate these markers to self-reports of depression, anxiety, and stress.

Methods: 20 autistic university students (11 males, mean age =23.58) and 40 neurotypical students (21 males, mean age =22.83) participated. Participants were asked to provide a ‘profile picture’ to be shown to other students. In the experiment, participants were shown photos of adult faces and told these were students from their university. For the social judgement task (SJT) participants were asked to evaluate whether the students in the pictures would have ‘liked’ the participant from their profile picture, then subsequently given feedback on whether their evaluations were correct or incorrect. In reality, the feedback was randomly created by the computer programme such that there were 50% ‘YES’ and 50% ‘NO’ (rejection) trials. In the age judgement task (AJT), participants estimated the age of the person in the picture and were given feedback on their evaluations. Behavioural responses and psychophysiological cardiac reactivity (inter-beat intervals; IBIs) were measured. Participants completed the Autism Quotient (AQ; Baron-Cohen et al. 2001), Liebowitz Social Anxiety Scale (LSAS; Liebowitz, 1987) and Depression Anxiety and Stress Scale (DASS-21; Lovibond & Lovibond 1995).

Results: Between-group behavioural and psychophysiological analyses were conducted. Autistic participants predicted they would be rejected on 56% of trials compared to 48% for the neurotypical group. Importantly, the psychophysiological results showed a significant difference between groups. The neurotypical participants had longer inter-beat intervals following social rejection trials indicating transient cardiac slowing. However, the autistic participants did not show cardiac slowing to the same trials (see Figure 1 panels A and B). These results were not due to generalised negative feedback effects, as the pattern was absent from the age judgement task. Finally, there were significant correlations between negative self-bias and AQ (r=.335, p=.009), LSAS (r=.505, p<.001), and DASS-21 scores (r=.296, p=.02).

Conclusions: Autistic adult participants showed atypical cardiac responsivity to social rejection within a social judgement task. It may be hypothesized that experience of social rejection in autistic adults has a down-regulation effect on psychophysiological responses as a potential compensatory mechanism. 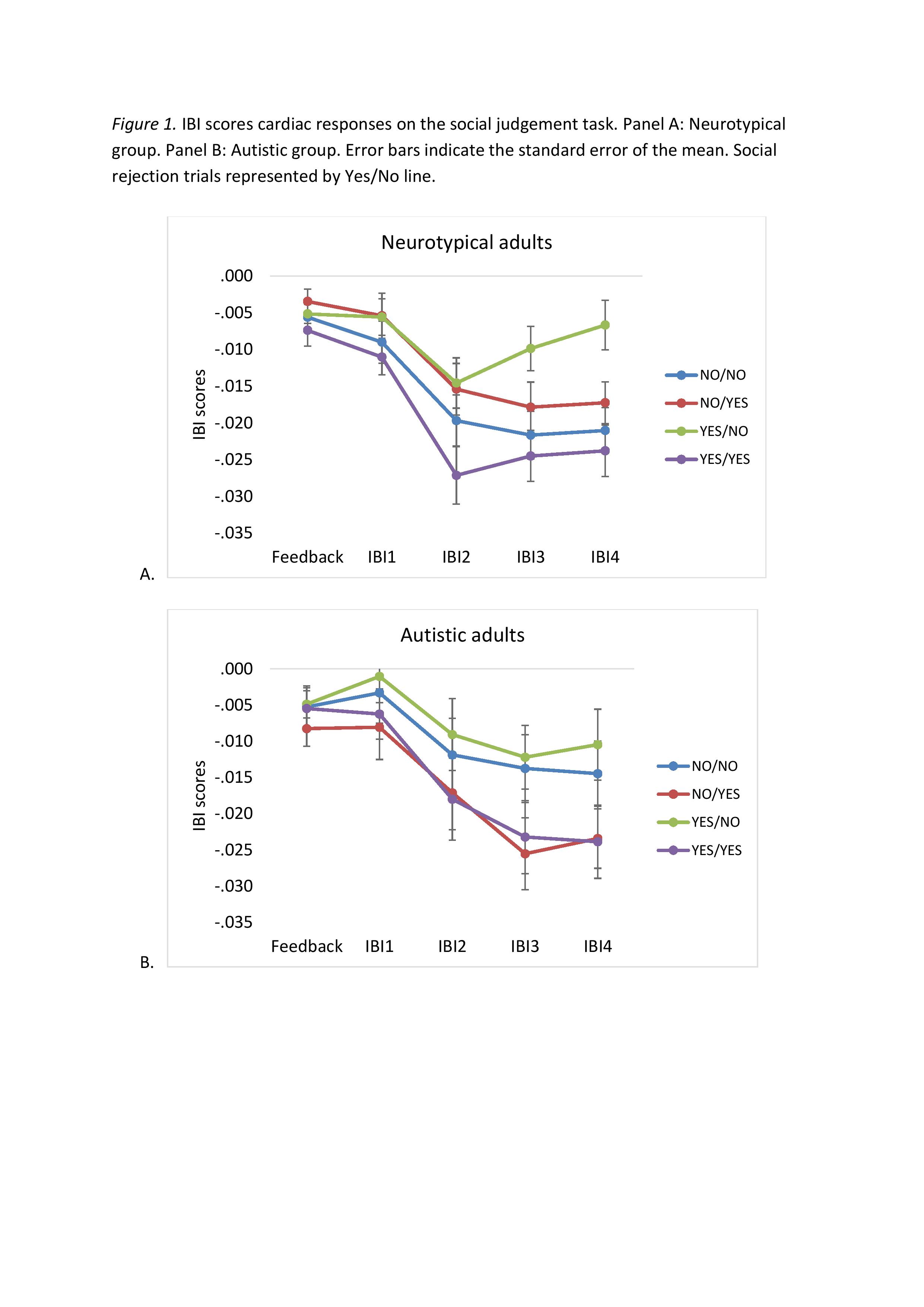