Poster Presentation
Room: 710 (Palais des congres de Montreal)
K. Casagrande, K. M. Frost and B. R. Ingersoll, Psychology, Michigan State University, East Lansing, MI
Background: The transition to college is often marked by anxiety, depression, and isolation. This transition may be especially challenging for students with ASD, who already experience increased anxiety and depression, alongside reduced life satisfaction. The College Student Subjective Well-being Questionnaire (CSSWQ) was developed to measure four specific aspects of well-being among neurotypical college students: college gratitude, academic efficacy, satisfaction with academics, and school connectedness. The CSSWQ is related to academic and psychosocial outcomes above and beyond general measures of well-being. Given the unique social deficits of ASD and risk for poor academic outcomes, it is important to understand whether predictors of college well-being are similar between students with ASD and their neurotypical peers.

Results: Overall well-being did not differ significantly across groups (F(1,90)=2.228, p=.139, η2=.024). On the CSSWQ, only the school connectedness subdomain (F(1,90)=4.253, p=.042, η2=.045) was different between groups, such that students with ASD reproted lower levels of connectedness than their neurotypical peers (see Table 1). After controlling for demographics (age, gender, race, and first-generation student status), college-specific well-being (∆R2=.329, p<.001), connectedness specifically (β=.52, p<.001), explained a significant amount of variance in general well-being over and above the effect of autism severity alone (∆R2=.072, p=.006). The interaction between CSSWQ domains and autism symptom severity was also not significant (∆R2=.010, p=.610). Exploratory correlations showed that connectedness was related to a variety of other predictors of well-being, such as social support and integration, whereas other domains of college well-being were not (see Table 2).

Conclusions: While the relationship between college well-being and a more general measure of well-being was similar across groups, individuals with ASD were less likely to report feeling connected with peers in college. Furthermore, that connectedness was highly related to overall well-being even after accounting for ASD symptom severity. Given the importance of the college social experience in both college and overall well-being, significant attention should be paid to the protective role of social support systems in addition to academic services when understanding how to support individuals with ASD in the college transition. 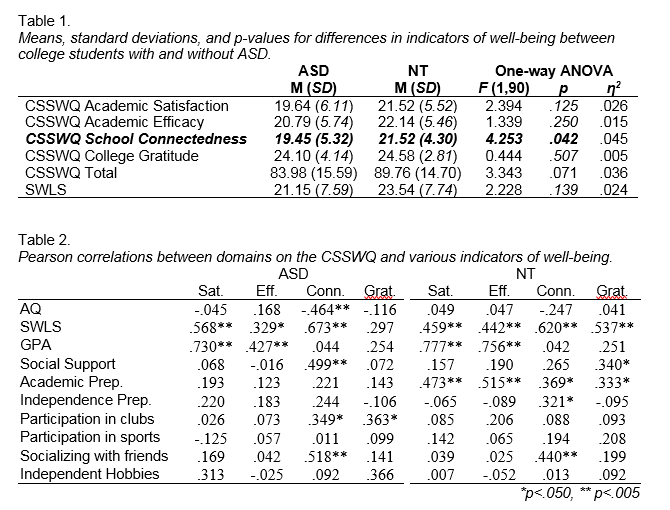