30984
Repetitive and Stereotyped Behaviors in Autism: A Longitudinal Exploration of the Repetitive Behavior Scale-Revised throughout Childhood

Objectives: The goal of this study was to explore the evolution of repetitive and stereotyped behaviors exhibited throughout childhood using the Mirenda et al. (2010) sample and to document the associations between the trajectories identified and developmental outcomes.

Methods: Data were drawn from the Pathways in ASD cohort (N=421). Participants were assessed using the Repetitive Behavior Scale-Revised at the time of diagnosis(T1), 6 months(T2) and 12 months(T3) later, and followed-up at ages 6 years(T4), 9 years(T5), and 11 years(T6). Assessments of developmental outcomes (Vineland Adaptive Behavior Scales for adaptive functioning, the Perceptual Reasoning Index of the WISC-IV for non-verbal IQ, and the Core Language score of the Clinical Evaluation of Language Fundamentals for language) were completed at T5 or T6 (only the most recent assessment was considered). To create a measure of the number of different behaviours exhibited that was independent of severity, 43 items on the RBS-R were recoded into dichotomous variables and summed. Scores 1-3 were assigned a 1 (exhibits behaviour), while items with a score of 0 remained (does not exhibit behaviour). Group based trajectory modeling analysis was then performed to describe children’s RBS-R trajectories using these summed scores. One way ANOVAs were used to examine whether trajectory groups were associated with developmental outcomes.

Conclusions: These results are a first step toward a better understanding of how the numbers of exhibited repetitive and stereotyped behaviors change over time in autism. Such longitudinal approaches can be useful in understanding how this domain of symptomatology is linked to development. Further insight involving the role of behaviour severity, in addition to its appearance, is also warranted. 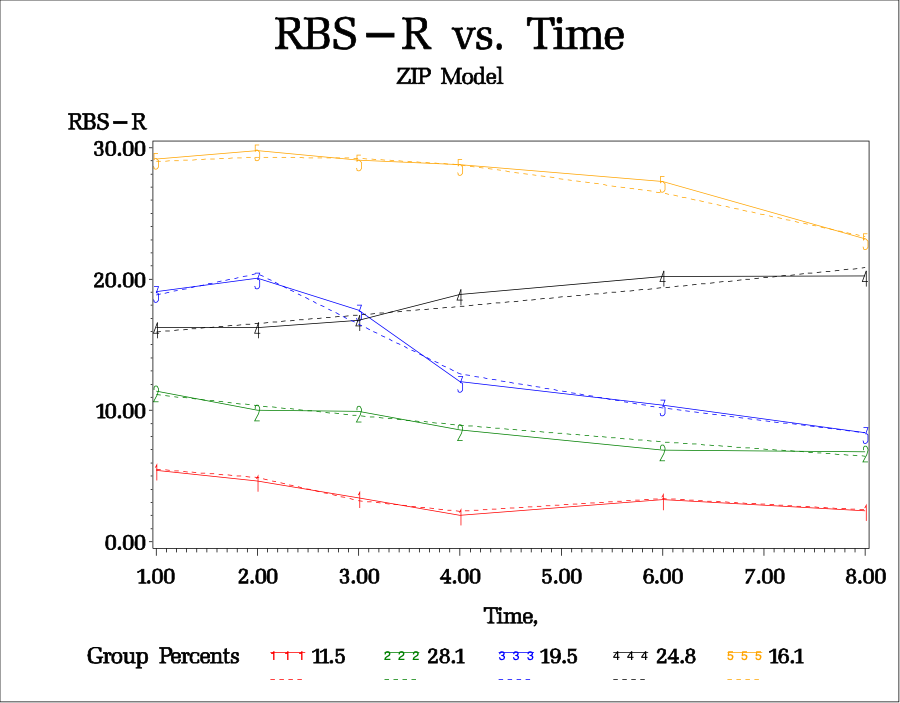