Oral Presentation
Room: 517C (Palais des congres de Montreal)
K. M. Hauschild1, A. N. Gioia2 and M. D. Lerner1, (1)Psychology, Stony Brook University, Stony Brook, NY, (2)Psychology, Stony Brook University, Albertson, NY
Background: There is marked heterogeneity in the facial emotion recognition (FER) abilities of individuals with autism spectrum disorder (ASD; Harms, Martin, & Wallace, 2010). Due to a prevalent belief that individuals with ASD experience deficits in the implicit encoding and holistic processing of facial information (Behrmann et al., 2006), one interpretation of this variability has been that it represents individual differences in the capacity to develop and enact effective compensatory processing strategies (Rutherford & Troje, 2012). This has led to the examination of the role overall cognitive functioning (often operationalized by an intelligence quotient; IQ) may play as a proxy for these alternative, compensatory processing mechanisms in predicting FER abilities (Dyck, Pick, Hay, Smith, & Hallmayer, 2006). However, additional factors that may moderate this relationship such as participant age (Lozier, Vanmeter, & Marsh, 2014) and stimulus characteristics have rarely been explored. Given that FER abilities reach maturity during late-adolescence (Thomas et al., 2007) and that typically-developing individuals demonstrate a processing advantage for own- compared to other-age facial stimuli (Rhodes & Anastasi, 2012), we hypothesized that participant age would moderate the relationship between IQ and own-age FER abilities such that overall cognitive functioning would only be related to FER abilities until late-adolescence when FER expertise is typically achieved (Ewing, Karmiloff-Smith, Farran & Smith, 2017). Furthermore, we hypothesized that this moderation may be contingent upon ASD symptom severity (Webb, Neuhaus, & Faja, 2017).

Objectives: To delineate the relationship between IQ and own-age FER abilities for adolescents as a function of participant age and ASD symptom severity.

Results: Results revealed a three-way interaction (B = -.005; p = .01) indicating that age moderated the relationship between IQ and errors in child FER (i.e., the relationship was strongest in the youngest adolescents, weaker in slightly older adolescents, and non-significant in the oldest adolescents), only when participants had low, but not moderate or high levels of ASD symptom severity. At moderate and high levels of ASD symptom severity, IQ significantly predicted own-age FER errors regardless of participant age (see Figure 1).

Conclusions: As predicted, results indicated that the relationship between IQ and child FER errors was moderated by participant age for adolescents. This suggests that overall cognitive ability may only relate to behavioral performance on tasks of FER until a level of developmental expertise is achieved (during late-adolescence). However, this moderation was also found to be contingent upon level of ASD symptom severity indicating that individuals with ASD may rely on compensatory FER strategies that are more closely and continuously tied to aspects of general cognitive functioning. 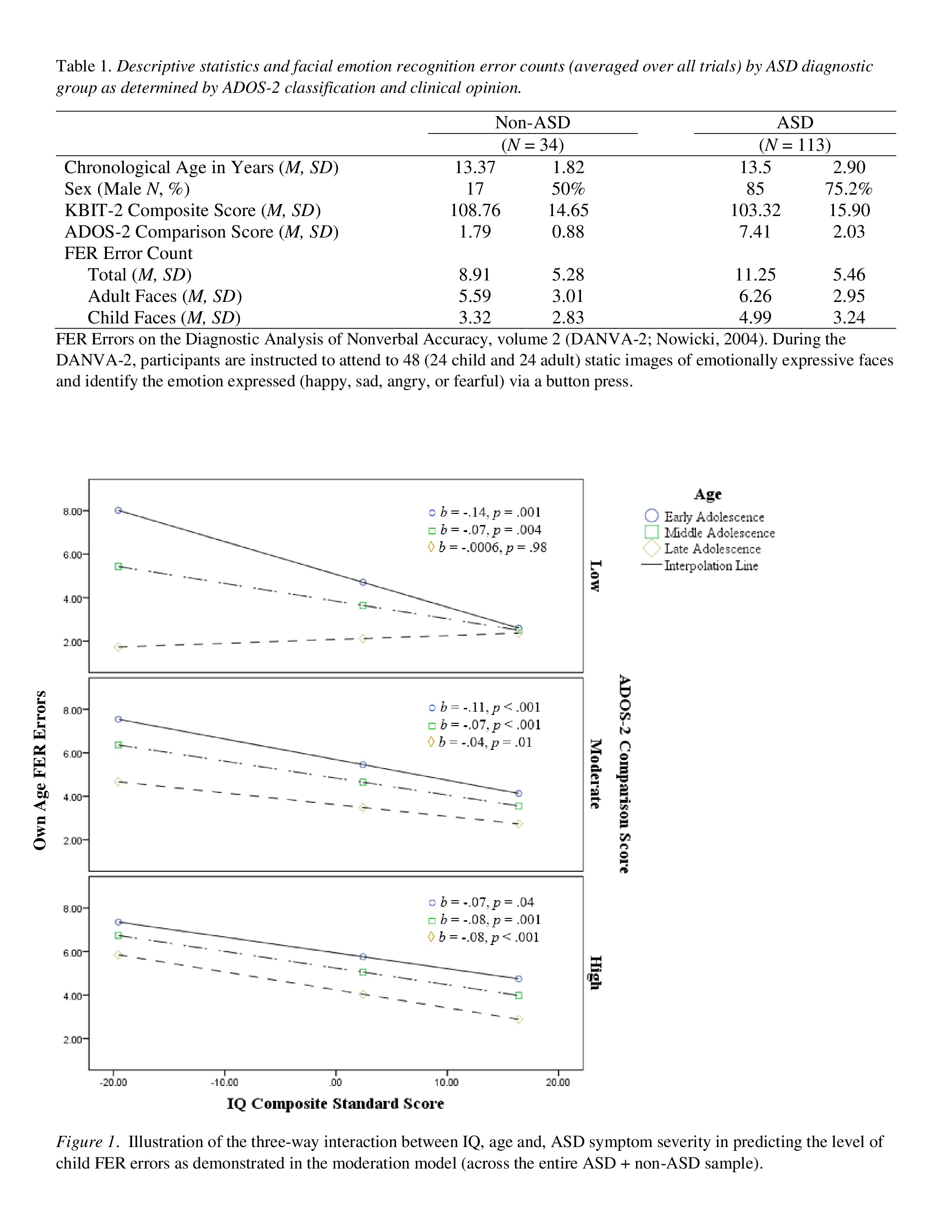