Fifteen children with ASD (2.5–5.3 years, developmental age 1.2–4.2 years), 16 typically developing children (TD) matched with chronological age, and 14 children with developmental delay (DD) matched with developmental age, participated in the study. The baseline EEG was recorded when the children were watching a 3 minute video, where a person was calmly building a block tower. Only segments without movements or other distractions were analyzed, based on video analysis. The gamma band activity (24.4-44.0 Hz) was analyzed in central and parietal areas, which are least likely to be contaminated by of myogenic artefacts. The level of autistic behaviour was measured with ADOS-2 and ADI-R. 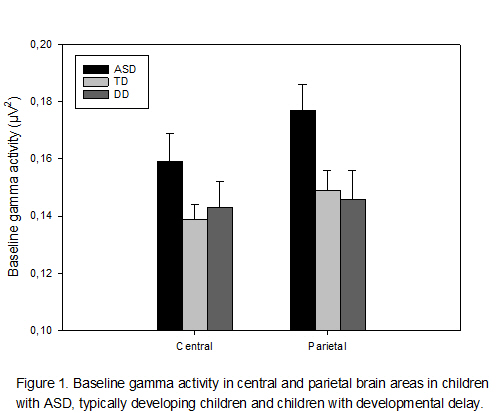