Methods: A novel Arid1b mouse model was generated in-house at the Toronto Centre for Phenogenomics. The sample consists of 11 males and 11 females, 5 of which were mutants and 6 of which were wildtype controls of each sex. Male and female Arid1b mice were scanned longitudinally over 5 early postnatal day (p) time-points: p4, p6, p8, p10 and p17. A 7.0 Tesla MRI scanner with cryocoils was used to acquire images of the mouse brains with a resolution of 75 um isotropic. Scan data was analyzed using image registration and deformation based morphometry approaches described in Qiu et al (2018). From this, the volumes of 182 distinct regions were calculated (Dorr et al 2008, Ullmann et al 2013, Steadman et al 2014). We used linear mixed effects models to determine the effect of genotype, sex and their interaction on the volumes of each region of interest over time.

Conclusions: We plan to replicate this finding and extend the timepoints past p17 to gain a better understanding of this sex-dependent neurodevelopmental trajectory. This work demonstrates, for the first time, that structural neuroanatomical phenotypes are different for male and female Arid1b mice early in development but this divergence dissipates before p17. Given the sex differences in the prevalence of ASD and Coffin-Siris syndrome, these findings suggest that ARID1B’s interaction with neurodevelopmental patterns may be one underlying cause of this disparity. 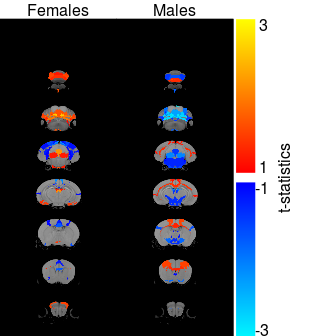