Objectives: To determine whether coloured lighting influences the observed behaviour of children with ASD.

Methods: A cross-over, double-masked, placebo-controlled study involved 11 children with ASD and 11 controls (aged 6-14 years) matched on verbal (BPVS) and non-verbal (Ravens) IQ measures. An optimal coloured light was individually selected for each child using the “Intuitive Colorimeter” process (Wilkins et al, 2002). A placebo colour was selected using an algorithm so as to differ by 0.091 in CIE UCS chromaticity. The lighting was matched for illuminance. One month after colorimetry all children were videoed performing the “Description of a picture” tasks from the ADOS, under both test and placebo lighting. The videos were rendered in monochrome and behavioural observation coding was used to assess social interaction and autism-like behaviours in the two different lighting conditions. The two raters were both ADOS trained and blind to both diagnosis and lighting condition. They rated eye-contact, social conversation, non-verbal communication, joint attention, atypical social conversation, autistic features (e.g. hand flapping, covering eyes) and other notable behaviours. They also each scored the child’s behaviour on an ADOS-like questionnaire and gave their “general impression” of whether the child was autistic on a scale from 0-100.

Results: Observable autistic features decreased significantly under optimal coloured lighting relative to placebo (β= -0.887; SE=0.225, z= -4.34, p=0.001). Post-hoc pairwise comparisons on the significant condition-by-group interaction, (β=1.538; SE=0.419, z=2.756, p=0.006) revealed a significant difference between conditions only in the ASD group (Z = -3.23, p = 0.007). Thus, under optimal coloured lighting, observable autistic features decreased to a greater extent in autistic children than in controls. Both groups of children were rated as significantly less likely to be autistic in the optimal colour condition (WTS(1) = 7.765; p = 0.016). However, there was no evidence that the optimized lighting altered conversational engagement, non-verbal communication, eye contact or joint attention in the ASD group.

Conclusions: Results suggest overall positive effects of optimal coloured lighting both for autistic and typical children and particularly on the non-social signs of ASD. Together with recent related data showing improvements in other areas of difficulty faced by autistic children (Ludlow et al, 2018), they encourage future research on the potential of coloured lighting and lenses as a beneficial adaptation of the sensory environment. 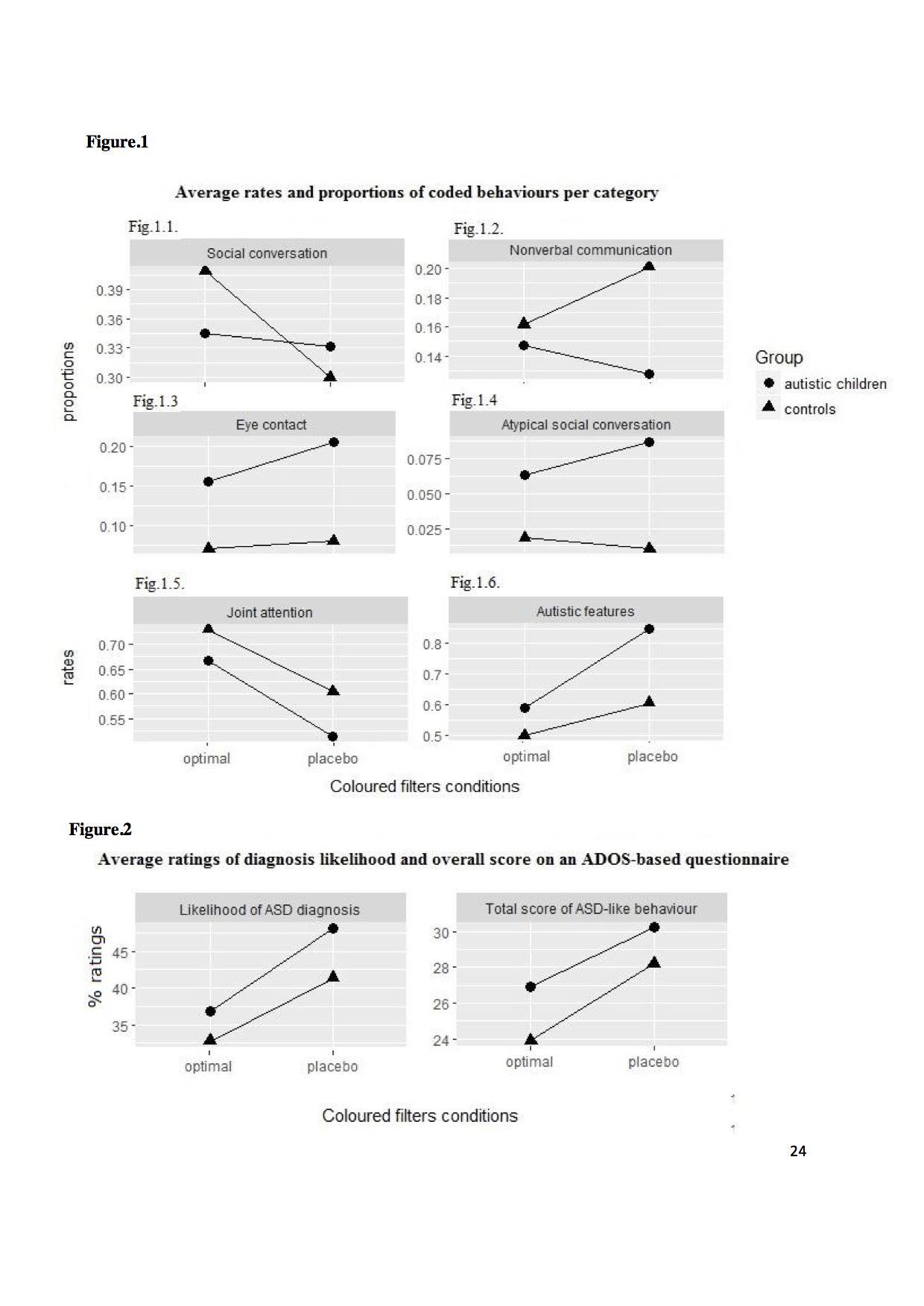