31625
Women with ASD: Outcomes of a Pre-Employment Program

Current research on women with autism spectrum disorders (ASD) and employment success is lacking. To date, studies that have reported on predictors of employment and gender have been mixed. EmploymentWorks Canada (EWC), a national program embedded within the community, is gathering practice based evidence in relation to gender and employment.

To compare the employment outcomes of young women and men with ASD following participation in EWC, an employment preparedness training and experiential community-based job sampling program, and to capture the lived experiences of the young women.

Data was extracted from the application or baseline measures and employment rates were derived from follow-up phone calls with participants. Phone interviews were completed with 10 young women following participation in the EWC program.

Participants (n=262) from 9 provinces across Canada completed the EWC program; 76% (n=199) were men and 24% (n=63) were women. The men and women were comparable on a number of personal factors; age, educational attainment, minority representation, understanding of single word vocabulary (a proxy for Verbal IQ) as measured by the Peabody Picture Vocabulary Test - Fourth Edition (PPVT-4), reported severity of autistic symptoms based on the Social Responsiveness Scale - 2 (SRS-2), independence in activities of daily living as measured by the Waisman – Activities of Daily Living (W-ADL), independence of transportation, and previous work history (Table 1).

Differences were noted in relation to age of diagnosis and co-existence of mental health concerns (Table 1). Significantly more women (46%) received a diagnosis in adolescence or adulthood compared to men (29%). Women were more likely to have heightened experience related to depression (49%) and panic attacks (36%), than men (27% and 20% respectively).

Both men and women had similar employment rates at the beginning of the program but 3 months after completion, women were significantly more likely to have found a job with over half of the women indicating that they were employed (Figure 1).

Themes from follow-up interviews focused on challenges related to receiving a diagnosis later in life and limited awareness about women with ASD. Most participants stressed the importance of believing in oneself, the need for self-advocacy and connecting with others.

For women in the program, the age of diagnosis and identified depression or panic attacks did not negate post-program employment. 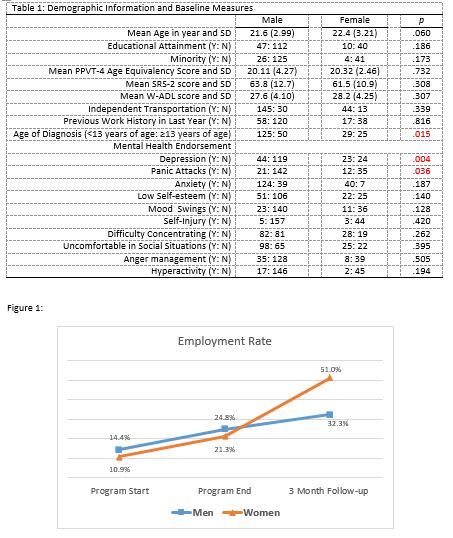