31675
Characterizing the Neural Phenotype of CHD8 and CHD8-Regulated Targets

CHD8 is one of the most commonly identified genes in ASD with the most prevalent recurrent de novo mutation rate in ASD cohorts and present a strong genetically-defined subtype of ASD (Bernier et al., 2014). Given the regulatory effects of CHD8 on other neurodevelopmental genes (Cotney et al., 2015), recent evidence indicates that individuals with disruptive ASD-risk mutations to genes that are targeted by CHD8 exhibit a shared phenotype. Little is known about the human neural phenotype; however, Chd8 haploinsufficient mice exhibit altered auditory functional connectivity (Suetterlin et al., 2018), which may suggest issues in processing auditory information.

N1 amplitudes revealed the predicted pattern, F(4, 2400) = 2.89, p =.021, such that auditory deviance was larger in CHD8 and Target groups, relative to Non-Target group, p’s <.036, but not the No Event ASD group, p = .78. These effects were in part driven by the overall large N1 response of the Non-Target group (~8 µV) relative to the other groups (~6.5 µV). Notably, neither the CHD8 or Target groups differed from the No Event (i.e., “idiopathic” ASD) group, p’s > .15. There were no significant omnibus effects of habituation. However, pairwise comparisons indicated unique patterns of deviance (trial level p’s < .05, LSD), such that the CHD8 group exhibited early effects (before trial 40) and the Target group exhibited later effects (after trial 20).

Children with disruptive CHD8 mutations share a similar neural phenotype to children with a disruptive mutation to a gene targeted by CHD8. Critically, this shared phenotype is distinct from genes not targeted by CHD8, which suggests a potential converging genetic mechanism associated with CHD8 that may have implications for an array of high-confidence ASD risk genes. We will discuss these implications and the potential for the distinct habituation patterns as they pertain evidence of overconnectivity in Chd8 mice. 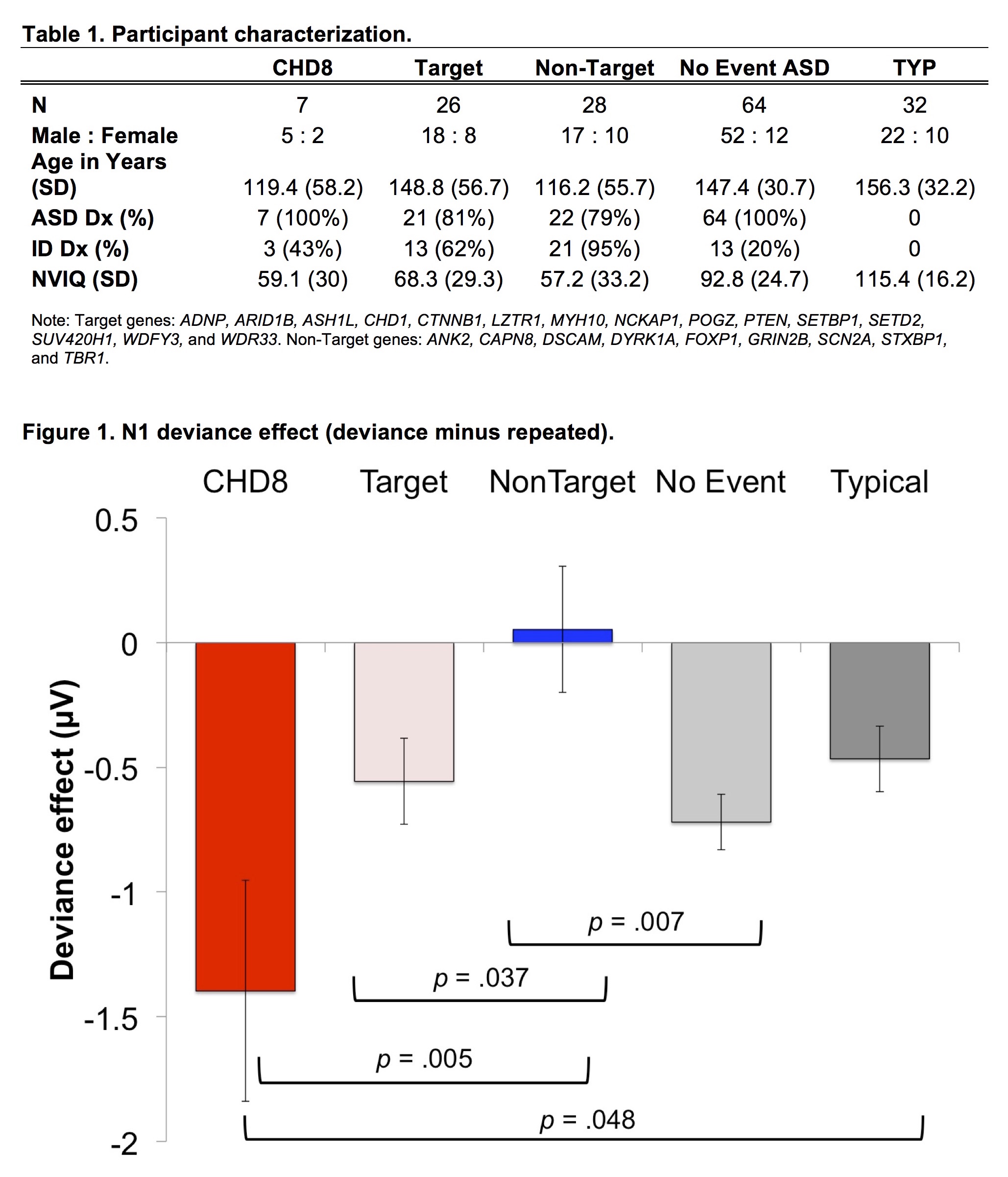