Poster Presentation
Room: 710 (Palais des congres de Montreal)
E. E. Condy, C. Farmer and A. Thurm, National Institute of Mental Health, Bethesda, MD
Background: Restricted repetitive behaviors (RRBs) are a core symptom criterion for an autism spectrum disorder (ASD) diagnosis. RRBs are heterogeneous, as evidenced by research that has psychometrically parsed this symptom domain. One common distinction is between ‘lower-order’ RRBs, such as restricted stereotyped behavior (RSB) and self-injurious behavior (SIB), and ‘higher-order’ RRBs, such as compulsive ritualistic sameness behaviors (CRSB). The validity of this distinction is supported by findings showing differential association with phenotypic characteristics; for example, lower-order RRBs are more common among those with lower IQ. Here, we expand on these findings by examining the interplay between the development of expressive communication skills and the development of subdomains of RRBs.

Methods: The sample consisted of 105 children with an ASD diagnosis enrolled in a longitudinal natural history study. The analyses included data from visits that occurred at approximately 1-year intervals between 3–7 years of age, with a minimum of three visits within this period. Each child’s parent/caregiver completed the Repetitive Behavior Scale-Revised (RBS-R) at each visit, as well as the Vineland Adaptive Behavior Scale (VABS, second edition). RBS-R subscores were calculated using the three-factor solution (Mirenda et al., 2010): CRSB, RSB, and SIB. To model expressive language skills, the VABS Expressive Communication Age Equivalent (Exp-AE) at each visit was used. Bivariate latent growth models of RBS-R subscore and Exp-AE were run simultaneously for each RRB subscore.

CRSB (the higher-order behaviors) also showed a stable trajectory on average. Neither the intercepts nor slopes of CRSB were significantly related to the intercept or slope of Exp-AE. However, a trend for a positive correlation between Exp-AE and CRSB intercepts was observed (p=.066), such that children with higher expressive language at age 3 had more severe CRSB scores.

Conclusions: Consistent with the literature, the mean trajectory of RRB subscores remained stable from 3-7 years old in this sample of children with ASD. At the individual level, a marginally significant positive correlation was observed between early higher-order RRBs and early expressive language. However, early expressive language skills were negatively related to the slope of RSM development, and early SIB were negatively related to the slope of expressive language development. While consistent with reports that lower-order RRBs are associated with lower cognitive ability, the present findings suggest that the nature of this relationship may vary across lower-order subdomains. 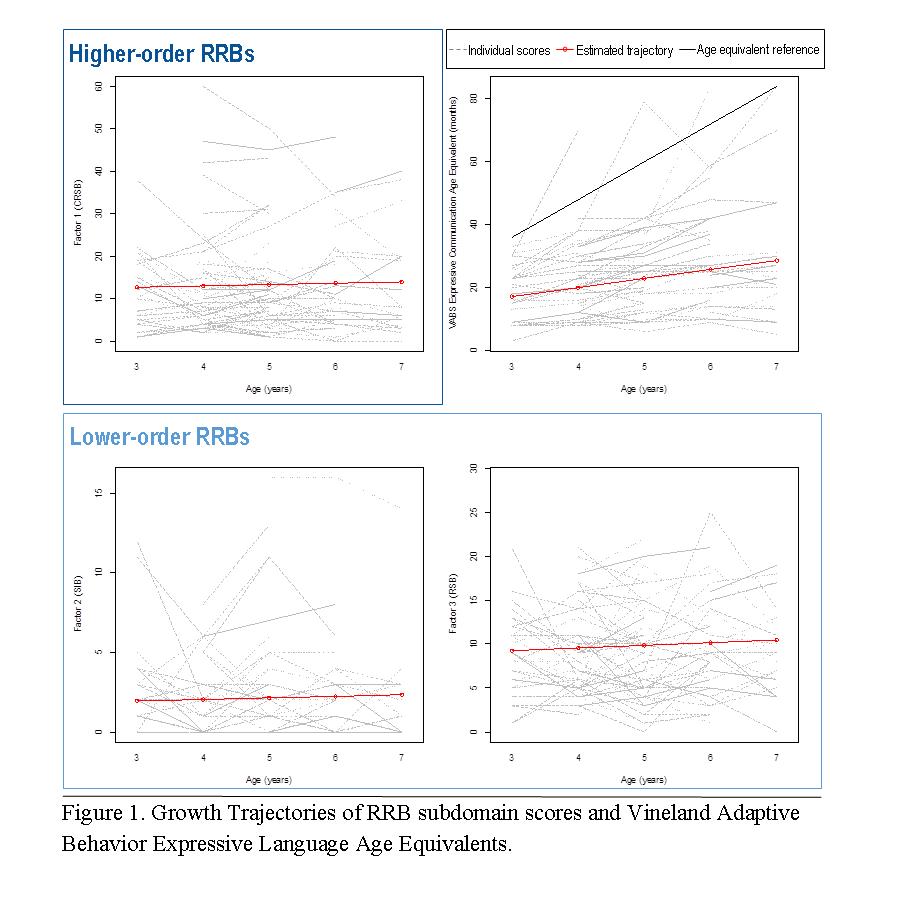