Objectives: To examine the neural response to name in preschoolers with and without ASD using an ERP paradigm that delineates the effects of speaker familiarity (familiar vs. unfamiliar) and stimulus type (own name vs. nonsense name).

Methods: Participants were age-matched 3-5-year-old typically developing (TD) children (n=13) and children with ASD (n=13). Each ASD participant was matched individually to a TD participant closest in chronological age, yielding a chronological age matched sample. Stimuli consisted of the ON and a pseudoword “nonsense name” spoken by either the child’s parent or a stranger. Speakers were instructed to call both names as though they were attempting to solicit the child’s attention. Stimuli were presented in random order in a single block of trials. Analyses focused on the frontal ON negativity component, given the previous findings supporting this component as an index of response to name in adults. A 2x2 repeated measures ANOVA was conducted using mean amplitudes with name (ON vs. nonsense name) and voice (familiar vs. unfamiliar) as within-subjects factors, and diagnostic group as a between-subjects factor.

Results: Within the TD+ASD comparison, the ANOVA revealed a marginally significant main effect of name (p=.05), such that ON elicited a more negative mean amplitude than did the nonsense name across both groups (F(1, 24)=4.10, p=.05, ηp2=.15). There was also a marginally significant interaction between voice and group (F(1, 24)=4.22, p=.05, ηp2=.15), such that the TD group exhibited a marginally stronger response to parent’s voice than to stranger’s (Bonferroni corrected p=.06), while the ASD group demonstrated the opposite pattern (corrected p=.36) (Fig. 1).

Conclusions: The current findings address a gap in the current neural processing literature on auditory processing of self-relevant stimuli in preschool children with and without ASD. Both TD and ASD preschool children had a stronger response to their own name than to a nonsense name. Children with ASD exhibited marginally stronger responses to the stranger’s voice than to their own parent’s voice, suggesting that that the familiarity of the speaker plays a unique role in how children with and without ASD process their name. 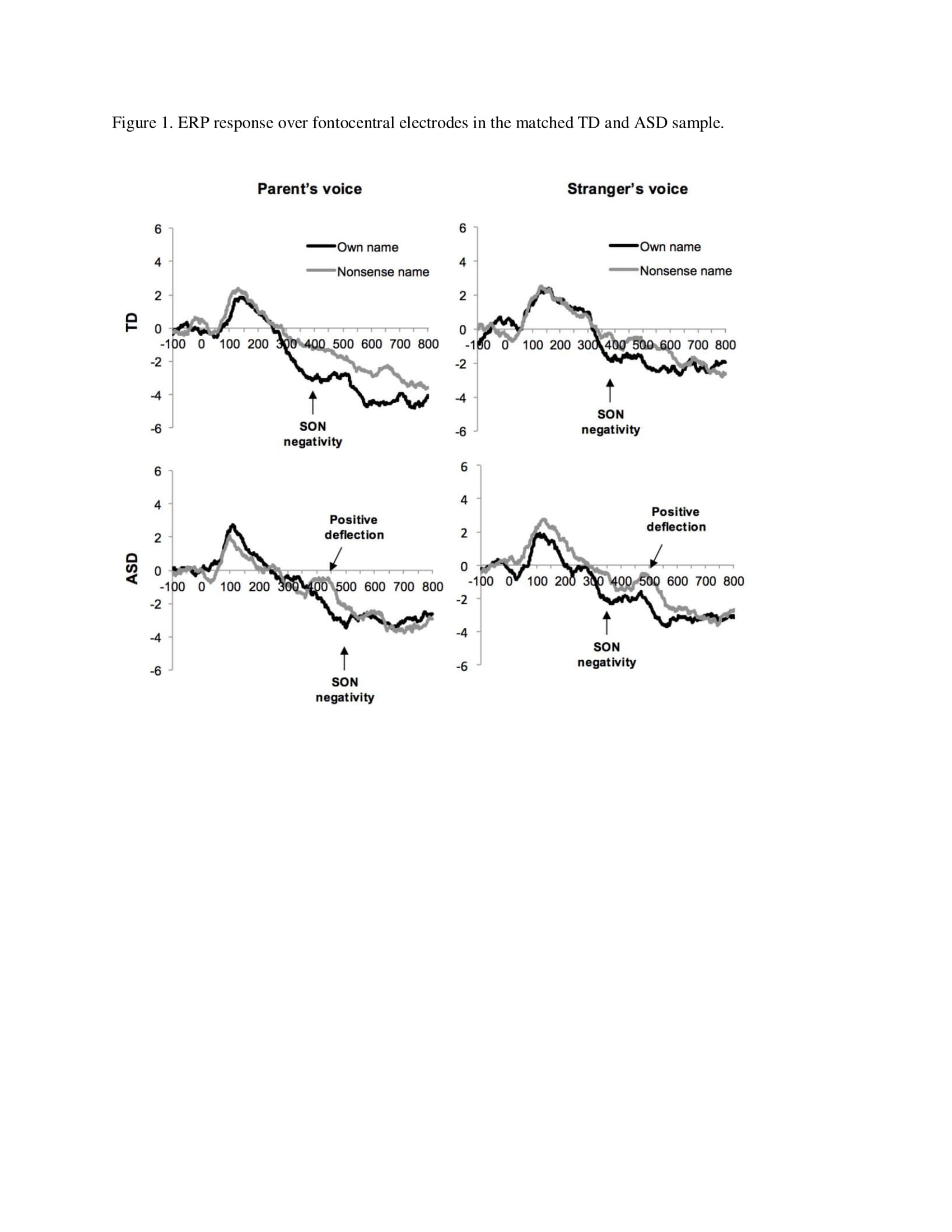