Oral Presentation
Room: 516ABC (Palais des congres de Montreal)
P. Yoder1, W. L. Stone2, C. Bush3 and K. Ragsdale2, (1)Department of Special Education, Vanderbilt University, Nashville, TN, (2)Psychology, University of Washington, Seattle, WA, (3)Special Education, Vanderbilt University, Nashville, TN
Background: Infant siblings of children with ASD are at 40% risk of developing a communication disorder due to ASD or language delay. The ImPACT (Improving Parents As Communication Teachers) intervention may be one way to mitigate the risk of communication disorder. One goal of ImPACT is to teach parents to model language related to the child’s focus of attention with the goal of facilitating the transition from pre-linguistic to linguistic communication. Using a weighted frequency of intentional communication enables showing growth in expressive communication during this transitional developmental period. Measuring changes in measurement contexts that differ on multiple dimensions from the treatment sessions provides a strong basis for inferring that the treatment produced generalized change.

Objectives: To test whether ImPACT’s effect on weighted frequency of intentional communication is due to its effect on parents’ language modeling.

Methods: We randomly assigned 53 parent-child dyads to either the ImPACT or a business-as-usual control group. See Table for participant description at study entry. Coders and examiners were blind to treatment assignment. Overall attrition was 10%; three from ImPACT, two from Control, respectively. Equivalency of groups at Time 1 was assessed on 15 relevant variables, which were controlled when indicated. There were two sites, but no site effects. Three measurement periods were separated by 3 months (pretest, immediate posttest, and 3-mo follow-up).

Parents were trained by an ImPACT-certified speech-language pathologist (SLP) or someone trained by the certified SLP. Mean percent adherence to ImPACT protocol for staff teaching parents was 91% (SD = 3%). Treatment sessions occur in the home. Twenty-four sessions occurred across 3 months between pre- and immediate post-tests.

Parents’ language modeling (utterances that verbally mapped the child’s focus of attention) was assessed at pre- and immediately post- treatment during a 15-minute parent-child free play activity that occurred in the lab. The number of 5-s intervals with parental language modeling was the putative mediator.

Weighted (nonverbal = 1 point, single word = 2 points, multiword = 3 points) frequency of intentional communication was measured at pretest and 3-mo follow-up during the Communication and Symbolic Behavior Scales (CSBS), an examiner-led structured communication sample. The CSBS used a different person, materials, activity and interaction style than that used in parent-implement ImPACT sessions, which was considered a strong test of generalization.

Results: As predicted, greater gains occurred in the ImPACT group than in the Control group for parents’ language modeling (p < .001, d = 1.0) and for children’s weighted frequency of intentional communication (p = .05; d = .46). As predicted, the indirect effect was significant. That is, the product of the effects of treatment on parental language modeling (the a path) and parental language modeling on child communication controlling for the treatment (the b path) had a confidence interval that did not include zero. See Figure.

Conclusions: Using ImPACT facilitated the transition from pre-linguistic to linguistic communication by increasing parents’ modeling of language. Ultimately, ImPACT may be one method to mitigate the risk of communication disorder in infant siblings of children with ASD. 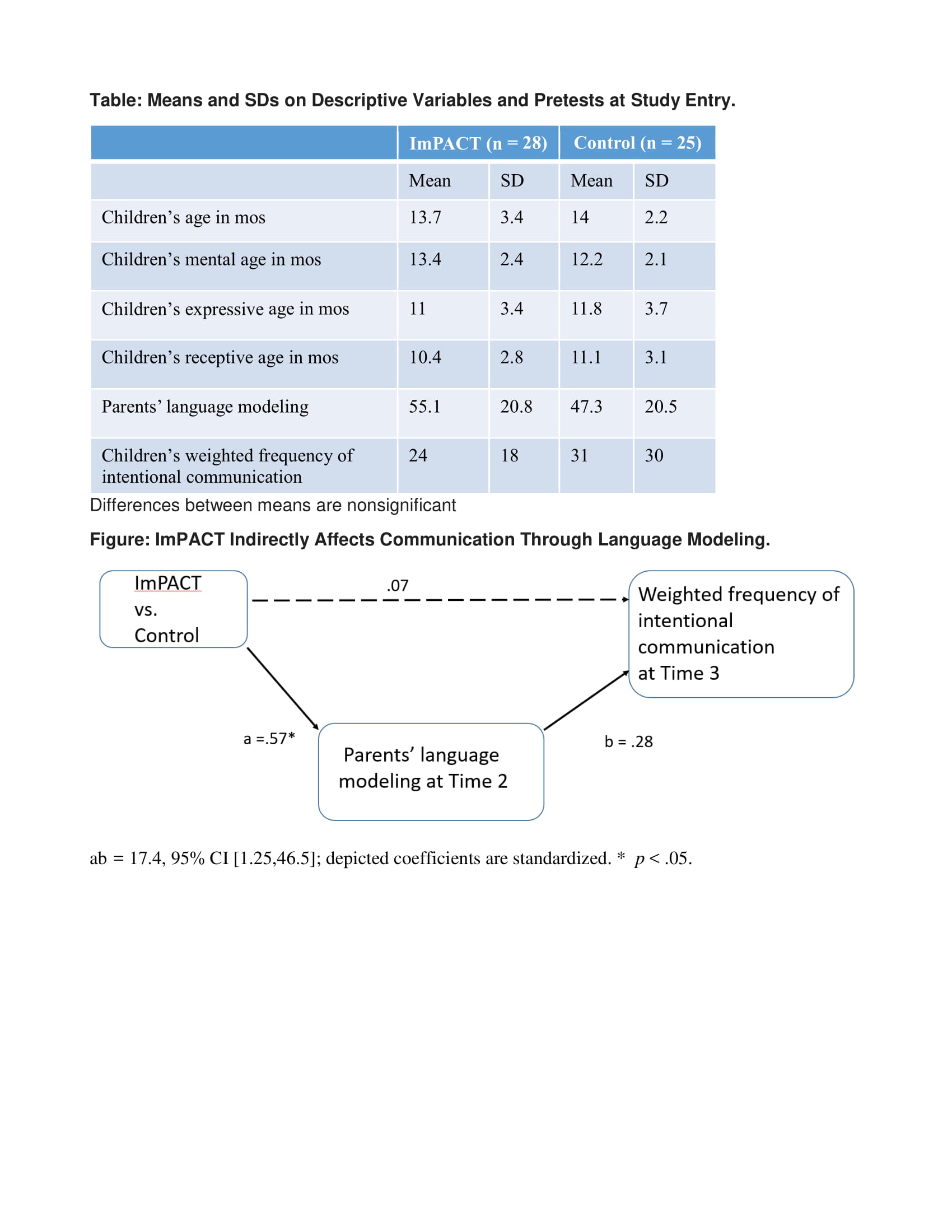