Poster Presentation
Room: 710 (Palais des congres de Montreal)
S. R. Edmunds1, P. Yoder2 and W. L. Stone3, (1)University of Washington, Seattle, WA, (2)Department of Special Education, Vanderbilt University, Nashville, TN, (3)Psychology, University of Washington, Seattle, WA
Background: Up to 40% of later-born siblings of children with ASD are diagnosed with ASD (7-19%) or other language and/or cognitive delays (14-20%) by age three. Vocal complexity, a measure of the quality and maturity of vocal communication, is a strong predictor of later expressive language in typically developing children and children with ASD, but no studies have examined this relation for toddlers at high familial risk (HR) for ASD.

Parent responsivity to toddlers’ vocalizations may facilitate children’s complex vocal communication, which in turn may provide the basis for expressive language. ImPACT is a parent-implemented, naturalistic developmental behavioral intervention (NDBI) that teaches parents to respond contingently to toddlers’ vocalizations, which could facilitate complex vocal communication and expressive language.

Results: For toddlers in both treatment conditions, there was a significant indirect effect: Time 2 PVR significantly predicted T4 expressive language, in part, through Time 3 vocal complexity, ab=1.74, 95%CI [0.64, 3.19] (Table 1; Figure 1). This indirect association did not vary by treatment group. Participation in the ImPACT intervention did not significantly affect Time 4 expressive language indirectly through Time 2 PVR or Time 3 vocal complexity.

Conclusions: To our knowledge, this was the first study to assess whether the relation between parental verbal responsiveness and children’s later expressive language is partly due to intermediate increases in the maturity of children’s vocalizations. Although this preliminary analysis did not find a significant effect of the ImPACT intervention on PVR or vocal complexity, it did find that regardless of treatment condition, PVR predicted an increase in the proportion of HR toddlers’ communication acts that were vocally complex, which in turn predicted later expressive language ability. Parents’ verbal responsiveness and children’s vocal production clearly influence each other in a transactional manner over time, a phenomenon that could have cascading implications for HR children. 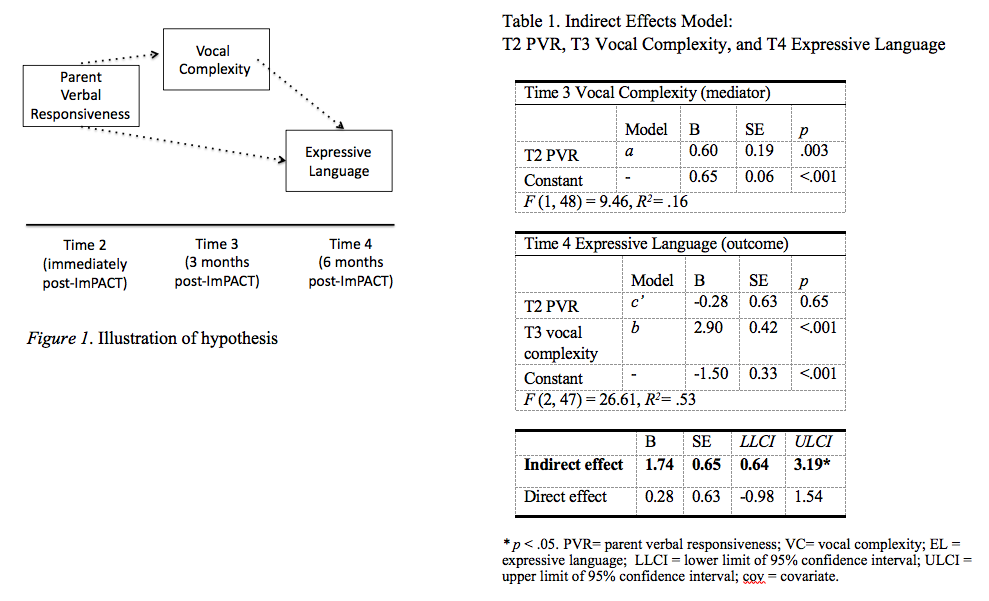