Objectives: To test whether the proportion of socially directed vocalizations differs in HR toddlers with ASD vs. without ASD, and measure whether rates of social directedness differ between groups separately by vocalization type (speech-like and non-speech).

Methods: Participants were 10 LR and 20 HR (10 HR-ASD; 10 HR- [non-ASD]) 2-year olds from the Infant Brain Imaging Study (IBIS). Groups were matched on Mullen Visual Reception score, maternal education, and sex ratio. Audio-visual recordings of the Communication and Symbolic Behavior Scales (CSBS) administration were available for all participants. Using ELAN, two trained raters segmented child vocalizations as (1) speech-like, (2) non-speech, and (3) vegetative (excluded from analysis). Discrepancies in segmentation and annotation were resolved through consensus. Child vocalizations were further classified as socially directed or non-directed on the basis of orienting, use of gesture, making a request, or responding to a question, by two raters with discrepancies resolved by a third rater. Inter-rater reliability was acceptable for ratings of speech-like, non-speech, and vegetative vocalizations (Cohen’s κ=0.74) and directed versus non-directed vocalizations (κ=0.65). Proportions of directed vocalizations out of the total number of vocalizations were treated as dependent variables in linear regressions with diagnosis as a dummy-coded factor, with ASD as the reference group.

Conclusions: This study provides preliminary evidence that when 2-year-olds with ASD vocalize, they direct fewer of their vocalizations toward others than typical peers. With additional video annotation (ongoing), we aim to increase our sample size and test interactions between diagnostic group, vocalization type, and manner of social directedness. 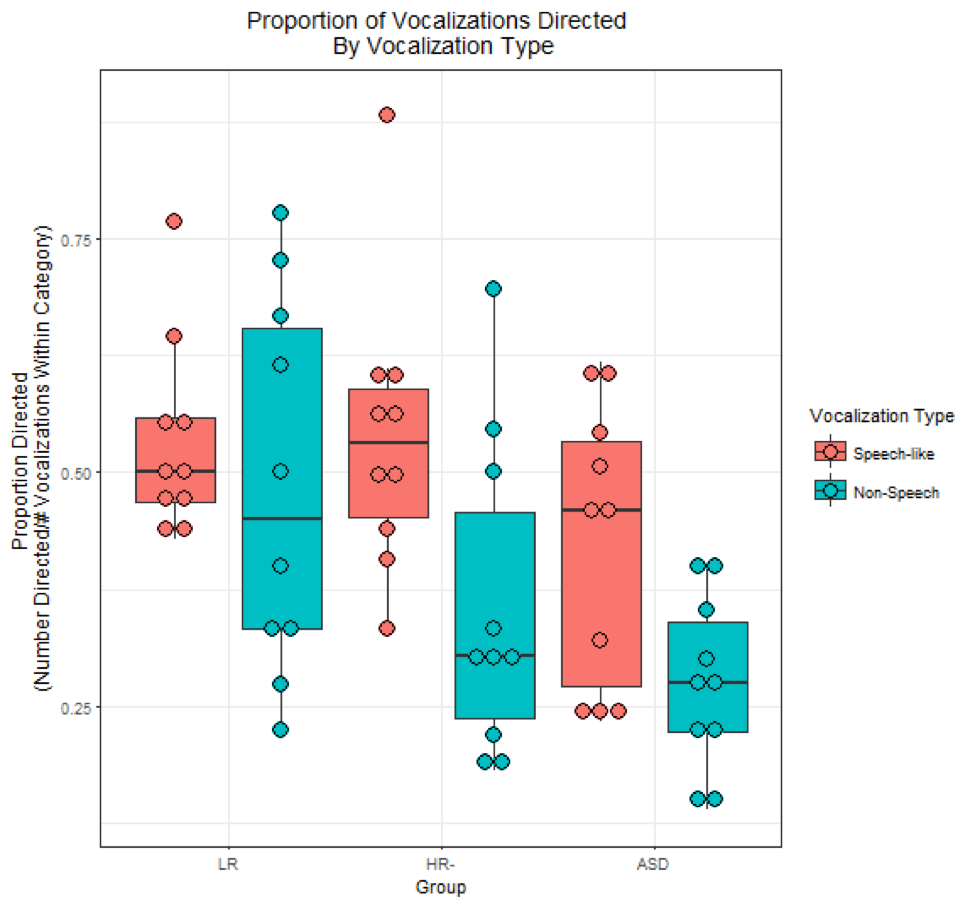