Poster Presentation
Room: 710 (Palais des congres de Montreal)
B. Stamova1, J. Schauer2, F. Sharp1 and J. Van de Water2, (1)Neurology, University of California at Davis, School of Medicine, Sacramento, CA, (2)MIND Institute, University of California, Davis, Davis, CA
Background: In addition to mTOR/Akt/PI3K Signaling being implicated in single gene causes of ASD, we and others have reported aberrant gene expression levels of genes from the mTOR Signaling pathway in idiopathic ASD. mTOR Signaling is a principal pathway that regulates cellular metabolism, growth, survival, and autophagy. It plays important roles in both innate and adaptive immune responses, such as promoting differentiation, activation and function of B-cells and regulatory and effector T-cells, development and activation of NK cells, in monocyte and neutrophil function, and in regulating cytokine production in the immune system. Thus, we investigated the expression of several mTOR signaling genes we have previously shown to be differentially expressed in ASD vs. TD (typically developing controls) and correlated their expression levels to cytokine/chemokine levels in the same subjects.

Objectives: 1) To validate in a new cohort our previous findings of differential expression of mTOR signaling genes (AKT3, EIF4A2, FNBP1, NAPEPLD, PIK3C3, PPP2R2A, PPP2R1B ); 2) to investigate the correlation between the expression of these mTOR signaling genes in whole blood, and the levels of cytokines/ chemokines in PBMC (peripheral blood mononuclear cells), as well as following stimulation by PHA or LPS.

Results: Our previous array study identified differential expression in the tested 7 genes in idiopathic ASD male compared to TD male. In the current study, in a separate cohort, we validated this finding in 5 (AKT3, EIF4A2, FNBP1, NAPEPLD, PIK3C3) of the 7 genes, which showed differential expression in ASD males vs. TD males (FDR p<0.05, up-regulated in ASD vs TD) (Fig. 1a). No gene was differentially expressed in ASD females vs. TD female (Fig. 1b). Both male and female ASD showed altered correlation association between mTOR-genes and many of the cytokines/chemokines tested in comparison to control subjects for both non-stimulated and stimulated conditions.

Conclusions: The aberrant expression of mTOR signaling genes may affect the immune system, as evidenced by changes in the correlation network between mTOR genes and cytokine/chemokine levels in ASD compared to TD. Due to the role of mTOR signaling as a central integrator of extracellular and intracellular growth signals, as well as cellular metabolism and immune system function, these genes and pathways may ultimately affect behavior. 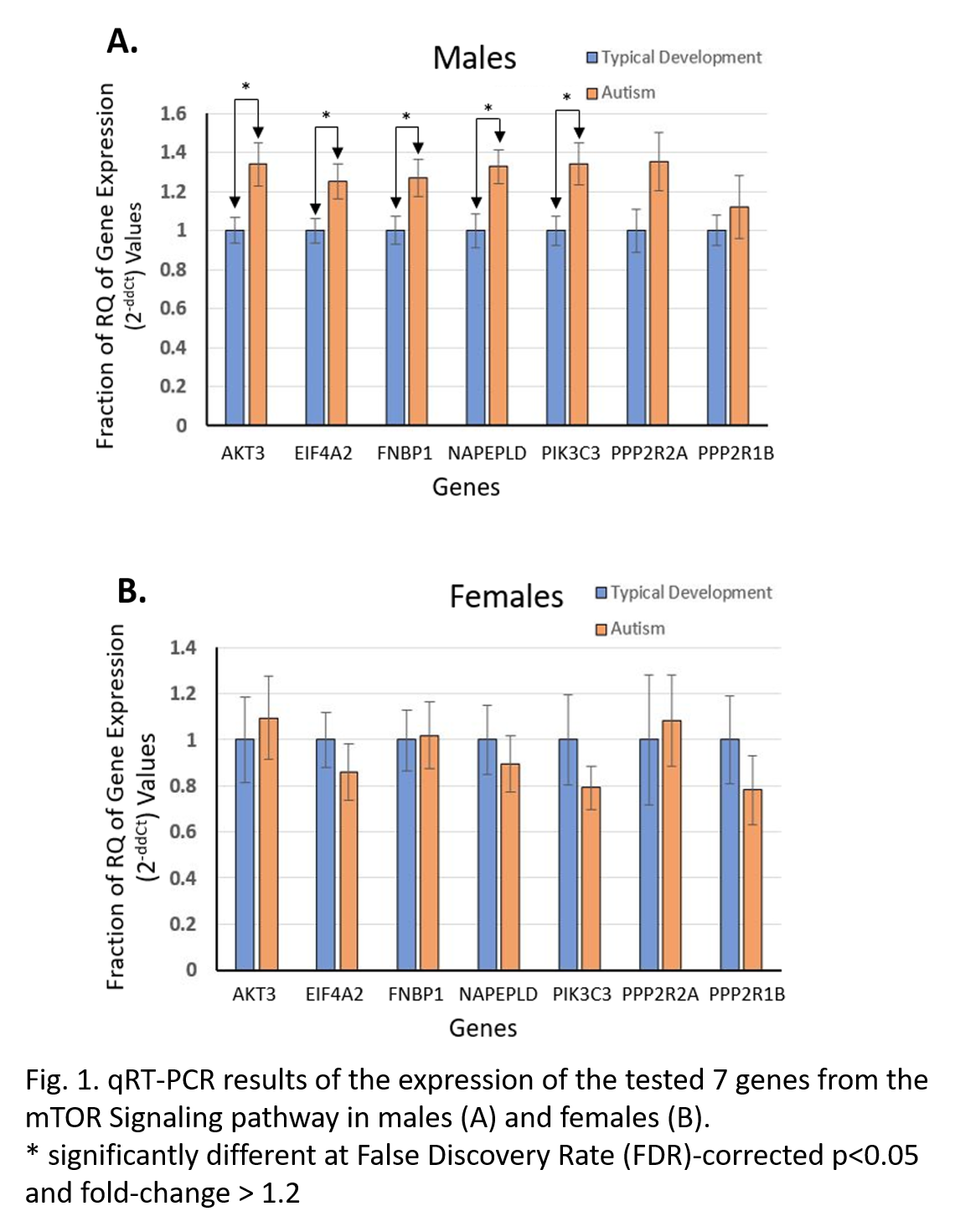