Alterations in social attention in early development have been reported in infants who later develop autism spectrum disorder (ASD). However, we do not know whether social attention lies on the causal path from genetic and environmental risk to later diagnosis. We explore whether polygenic risk scores (PRS) for ASD associate with dimensional measures of social attention in an infant sibling cohort. First, we examine the speed and amplitude of event-related neural responses (ERP) to faces at 6-10 months, which is altered in infants with later autism (Jones et al., 2016). Second, we examine the proportion of time infants spend looking at faces on static slides with social and non-social content. Declines in face looking over time have been previously associated with autism outcome (Jones & Klin, 2013; Ozonoff et al., 2010).

The primary objective of this study was to investigate whether atypical social attention in early infancy is associated with polygenic risk for autism.

ASD PRSs were generated for 138 infants of Caucasian ancestry derived from the British Autism Study of Infant Siblings (BASIS), a longitudinal prospective study of infants at high and low familial risk for ASD. PRS were generated using PRSice-2 and summary statistics from the Integrative Psychiatric Research Consortium (Grove et al.,2017). Social attention was assessed through i) event-related neural responses to gaze shift (P1,P400 latency and amplitude) and responses to faces and matched visual noise (N290) (Elsabbagh et al., 2012); ii) proportion of time infants spend looking at faces during a series of slides featuring faces, visual noise and objects (Gliga et al., 2010). ASD PRS were compared between infants with (N=23) and without (N= 115) an ASD diagnosis at 36 months. The association between the cross-sectional ERP responses to faces and PRS (n=138) was investigated. Longitudinal trajectories of proportion of attention to face generated using K-means for longitudinal data (KML) identified two parallel, downward-trending trajectories. PRS were compared between infants with different trajectories.

ASD PRS discriminated between infants with later ASD and those with typical or other atypical development (R2= 0.075, p = 0.0063). There was a trend association (p <0.1, r =-0.17) between PRS and N290 Latency, but not between P1 or P400. Face attention decreased over time in both identified trajectories. Infants on the lowest face attention trajectory had a slightly higher PRS (p <0.1), but there was no association with ASD diagnosis.

ASD PRS clearly discriminates ASD and non-ASD outcomes and finds trend associations with measures of N290 latency. N290 latency has been previously associated on the phenotypic level with ASD diagnosis (Elsabbagh et al., 2012) and with dimensional scores on behavioural measures of social development (Webb et al., 2011). Further, there were trend-level associations between trajectories of social attention and PRS, suggesting that infants with a higher polygenic load may show a diminished interest in faces throughout infancy. Taken together, this shows the promise of taking a translational neurodevelopmental approach to dissecting developmental paths to autism. 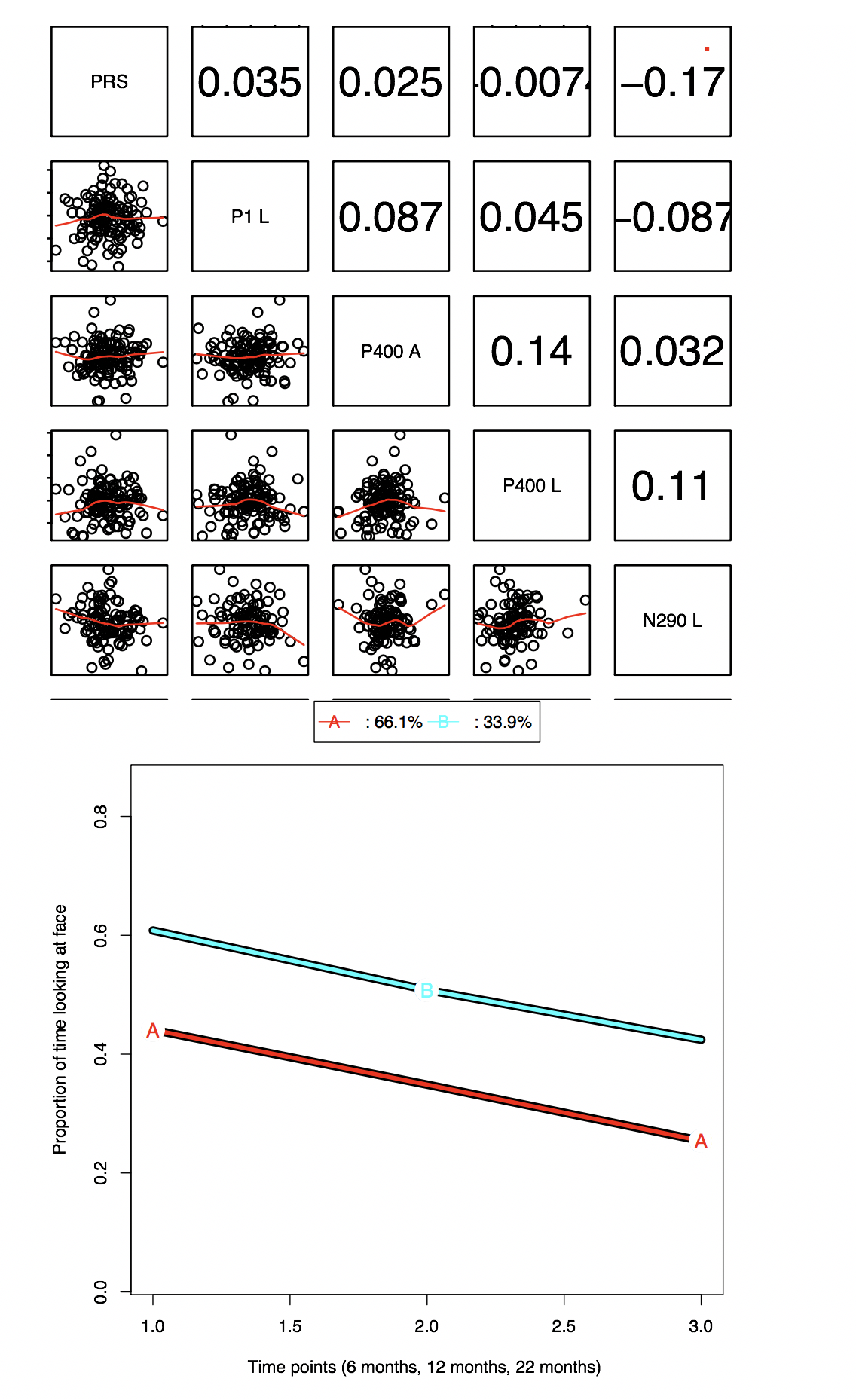