Creatine kinase (CK) is an enzyme that aids in the transfer of phosphate groups from ATP to creatine phosphate to meet metabolic energy demands of tissues such as brain and muscle (Sharma, Rosenberg, Bennett, Laskowitz, Acheson, 2016). Creatine kinase B type (CK-BB) is an isozyme of CK primarily found in the brain. Detection of CK-BB in serum suggests a permeable blood brain barrier and neuronal injury (Sahu, Nag, Swain, Samaddar, 2017). The potential use of CK-BB as a biomarker for Autism Spectrum Disorders (ASD) has not yet been explored.

The current study sought to identify endophenotypes in autism by observing variations in a marker of neuronal injury in children diagnosed with ASD; specifically, CK-BB.

A community population of children with neurodevelopmental disorders, meeting DSM-V criteria for autism underwent consultation for diagnostics and treatment. These children were evaluated for elevations in CK and its isozymes, including the BB fraction (CK-BB), along with a standard array of diagnostic assessments for children with autism. Patients were pulled from a community clinical population (n=435). Their laboratory data and clinical categories were tabulated in a spreadsheet in accordance with the guidelines and upon the approval of the regional IRB (SEAHEC, Study number 1711-1). Standard statistical analyses were applied. CK-BB was analyzed by Labcorp® according to their agarose gel electrophoresis with densitometry method.

There were no significant elevations in CK total in this population, yet there is significant elevation of CK-BB, a protein strongly correlated with brain injury and blood brain barrier permeability. These data suggest that a community population of children with autism have elevated CK-BB in serum regardless of their regression status and these levels are significantly higher when compared to normally developing children (Figure 1) (p<0.001).

Identifying autism with biological markers will aid in the understanding of autism’s diverse etiology, and lead to more rapid biological and medical treatments. We believe that CK-BB can be used as an inexpensive and readily attainable biomarker for the detection of brain injury and/or blood brain permeability in an autistic population. 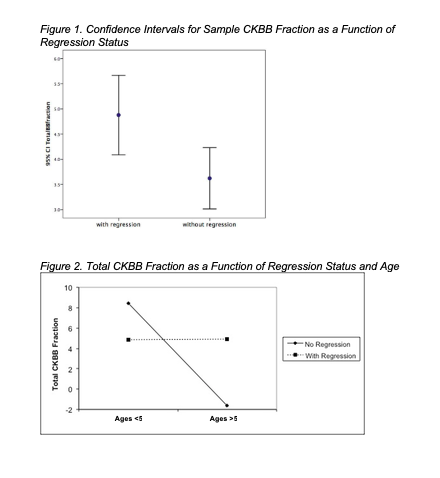