32080
How Do Adults with ASD Respond to Volatile Stimuli? Behavioral and Neural Evidence

Objectives: We investigated these hypotheses in a sample of adults with autism (ASD group, n=20, 8F) and neurotypical controls (TD group, n=14, 8F) by presenting olfactory stimuli which are naturally volatile and dynamic, and whose perception is generally not consciously rehearsed.

Methods: Participants were presented with subjective ratings during a behavioral olfactory discrimination task and a cross-adaptation task performed during fMRI. Four odorants followed a 2x2 design of two qualities (minty vs. floral) and two chemical groups (ketone vs. alcohol); for instance, one odor had a minty quality which came from a molecule containing either a ketone or an alcohol group. Participants sniffed twice in succession and smelled pairs of odorants that could share perceptual quality (e.g., they were both minty) or the chemical group (e.g., they were both ketones). Participants smelled 40 pairs of odorants (cued by the words 'sniff now') in a pseudo-randomized order 4.25s apart with trials separated by 24s of clean air to minimize sensory habituation. Participants had to decide whether the two odorants were the same or different.

Results: For the odor-quality (i.e., minty vs floral) discrimination task, the ASD group does not show the same reaction time benefit for “same” odor pairs as the TD group, and the interaction of condition (same vs. different odor) and group (ASD vs TD) is statistically significant. The same interaction pattern is significant for accuracy rates. Subjective ratings of familiarity changed significantly in the ASD group over the course of the task, increasing from 42/100 to 58/100 on the visual analog scale; the TD group started at the same level where the ASD group ended (60/100) and did not change with time. In the TD group, the “mintiness” rating seems to be is driven by the ketone odor, whereas the “floralness” rating is driven by the alcohol odor; in the ASD group, ratings of odor quality were not tied to chemical group. Analyses of fMRI data are ongoing. Preliminary data suggest suppression of activity following the presentation of two stimuli sharing one feature in the TD but not in the ASD group (Rosen et al., 1998) and the same pattern (TD not ASD) of odor-evoked activity in posterior piriform cortex (PPC) which significantly decreased (cross-adapted) in response to qualitatively similar, but not to chemically similar, odorant pairs.

Conclusions: In line with the hypothesis of overestimated volatility, the ASD group takes longer, with decreased accuracy, to discriminate pairs of odorants even for perceptually-similar olfactory stimuli. We discuss implications for treatment of uncertainty and anxiety and in everyday life. 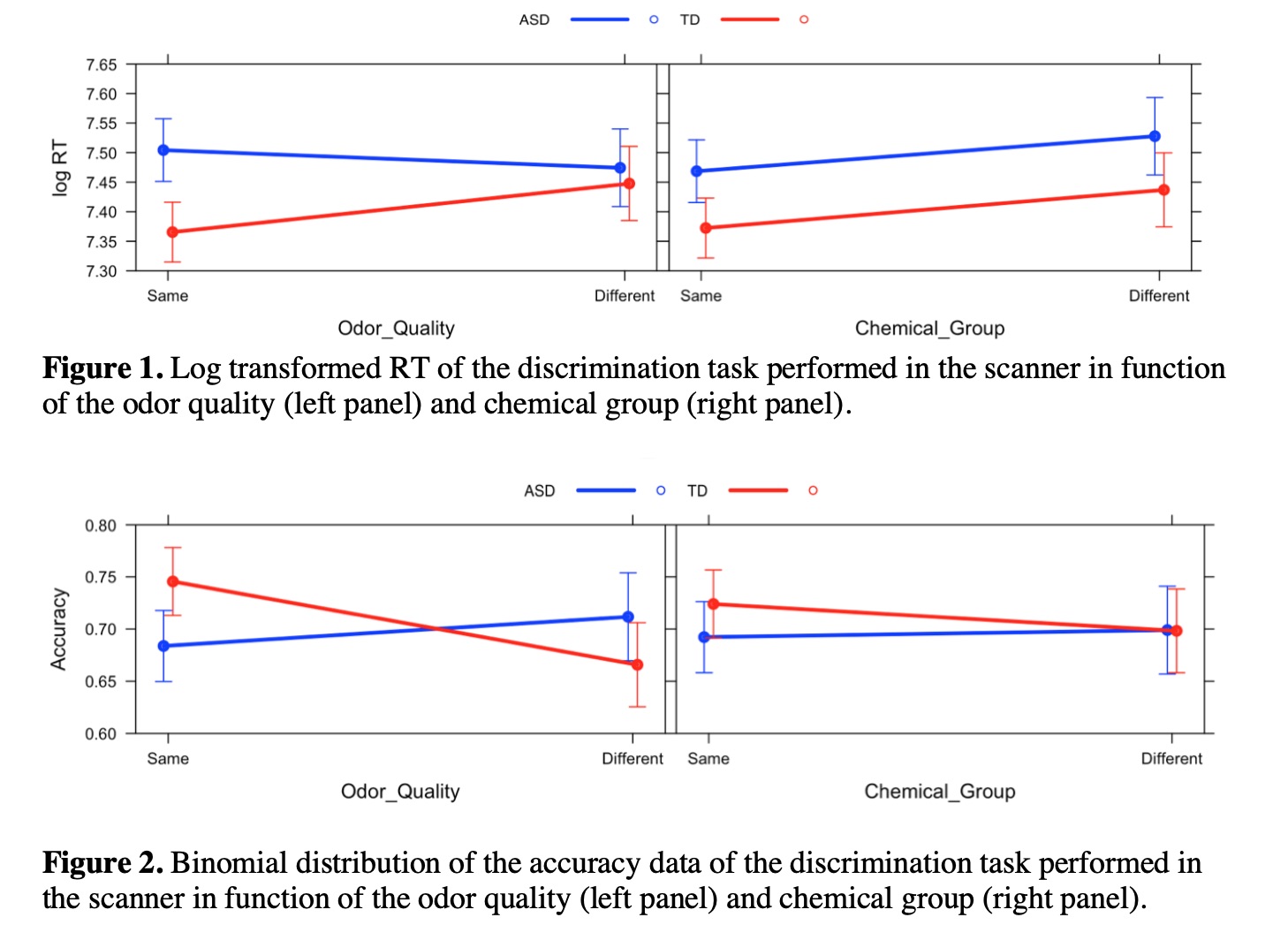