Methods: Participants: Children were grouped based on 3-year diagnostic outcomes: (1) HR infants diagnosed with ASD (HR-ASD; n = 34), (2) HR infants not diagnosed with ASD (HR-N; n=82), and (3) LR infants not diagnosed with ASD (n=62).
Assessments: The APSI is a 26-item parent-report questionnaire that queries early signs of ASD in infants between ages 6 and 18 months. It covers pre-diagnostic behavioral symptoms, including impairments in eye contact, visual tracking, responding to name, imitation, language, social development, joint attention, gestures, play, visual examination of objects, and emotional regulation. Parents completed the APSI when their children were 9 months of age. Clinical best-estimate diagnoses were completed at 3 years of age, using the Autism Diagnostic Observation Scale and the Autism Diagnostic Interview-Revised, by clinicians who were blind to previous assessments. Statistical Analyses: Performance on the APSI was compared using a one-way ANOVA with diagnostic group as the independent measure and total score as well as item-level scores as the dependent measures. Group effects for total score and individual items were explored using Benjamini and Hochberg (1995) corrections.

Results: A group effect was seen for total APSI score (F(2,175)=16.37, p<.001), with the HR-ASD group having higher scores than both the HR-N and LR groups (ps<.001; ds=.74 and .96, respectively), who did not differ (p=.12,d=.33). Significant group differences were observed for 16 of 26 APSI items (ps<.05), as displayed in Table 1. Importantly, the eight items that distinguished between HR-ASD and the other two groups (who did not differ) were: responding to name, anticipating a social response, eye contact, reactivity, showing interest and pleasure, use of hands/holding objects, unusual repetitive behaviors, and unusual sensory interests.

Conclusions: These results suggest that the APSI may be a viable screening option to identify, among children at familial high risk as early as 9 months of age, those who may require additional follow-up and referrals to specialized services. Utility in LR children in the community remains to be determined. 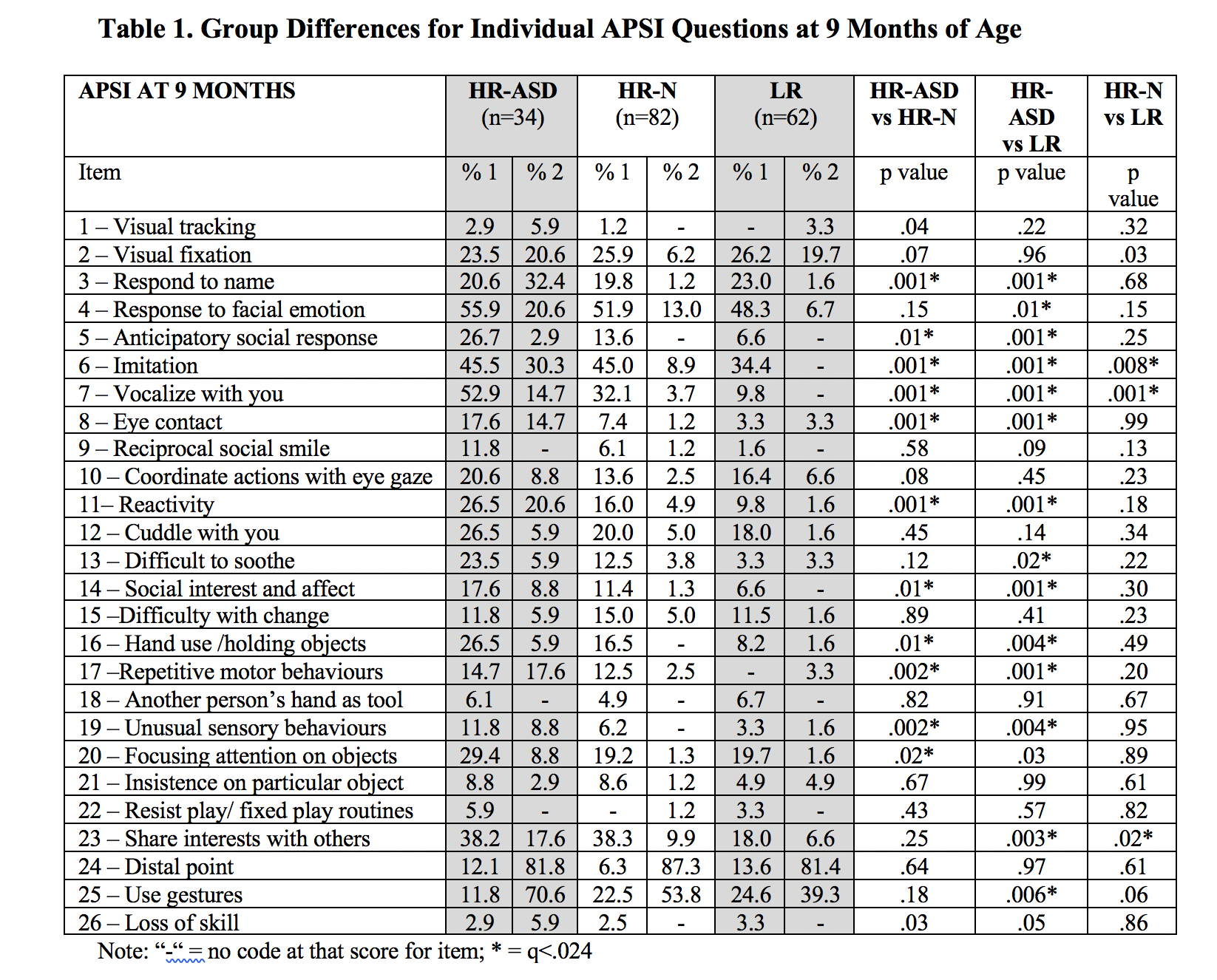