Poster Presentation
Room: 710 (Palais des congres de Montreal)
S. M. Myers, H. Shimelis, K. E. Wain, T. Challman, B. Finucane, C. L. Martin and D. H. Ledbetter, Geisinger Autism & Developmental Medicine Institute, Lewisburg, PA
Background: Pathogenic variants involving the same genes are identified in a variety of different clinical disorders, including autism spectrum disorder (ASD), intellectual disability (ID), epilepsy, schizophrenia, and other neurodevelopmental and neuropsychiatric conditions. It has been asserted that some genes are more ASD-specific (or ASD-predominant) and others are more specific for ID and other severe neurodevelopmental disorders (NDD) with or without ASD, based on whether the individuals were ascertained from ASD studies or ID/NDD studies (Satterstrom et al., bioRxiv 2018; doi.org/10.1101/484113).

Objectives: We examined whether there is evidence in our Developmental Brain Disorder Gene Database (DBD Gene Database) that pathogenic de novo LOF mutations in DBD-associated genes preferentially or exclusively cause ASD but not ID.

Methods: We used our DBD Gene Database (https://geisingeradmi.org/care-innovation/studies/dbd-genes/; Gonzalez-Mantilla et al., 2016), which integrates genomic data, including structural and sequence pLOF variants from exome and genome sequencing, copy number arrays, and targeted genomic studies published through March, 2018, with phenotype data on 6 clinically-defined disorders (including ASD and ID) to examine the phenotypes associated with pathogenic de novo LOF variants in DBD-associated genes. Analysis was limited to genes with ≥10 total probands with de novo variants in the database. The subset of these genes for which there were ≥10 ASD cases in the database, excluding individuals without ASD, was also evaluated.

Results: Among the 49 genes for which there were at least 10 total probands with de novo variants in the DBD Gene Database, none were associated exclusively with ASD (Figure 1). For 3 genes, CHD8, SHANK3, and SCN2A, there were more individuals with ASD-only than with ID-only, but many had both diagnoses, and for each gene there were more individuals with ID than without ID (ID rates 59%, 57%, and 58%, respectively). We separately examined the subset of these genes (ADNP, CHD8, NRXN1, POGZ, SCN1A, SCN2A, and SYNGAP1) for which there were ≥10 ASD cases, excluding individuals without ASD, and there was no evidence of enrichment for the ASD-only phenotype (Figure 2). Among these individuals with ASD, the rates of concurrent ID were as follows: ADNP 69%, CHD8 56%, NRXN1 64%, POGZ 73%, SCN1A 56%, SCN2A 48%, and SYNGAP1 64%.

Conclusions: We found no evidence of ASD specificity for genes with ≥10 total probands with de novo variants in the DBD Gene Database, even when limiting the analysis to individuals with ASD. Mutations that cause ASD also cause ID in most individuals, and for some genes in this database the phenotype is exclusively or predominantly ID (without ASD). However, answering the question of whether rare pathogenic variants in certain genes confer risk that is ASD-specific requires adequate phenotyping of all affected individuals studied, providing equal opportunity for diagnosis of each condition. Among individuals whose developmental brain dysfunction is attributable to a rare variant of large effect size, factors such as background polygenic risk (conferred by many common variants of small effect size) and developmental stochastic variation may be more important determinants of the specific neurodevelopmental phenotype(s) expressed than the gene(s) involved in the primary etiology. 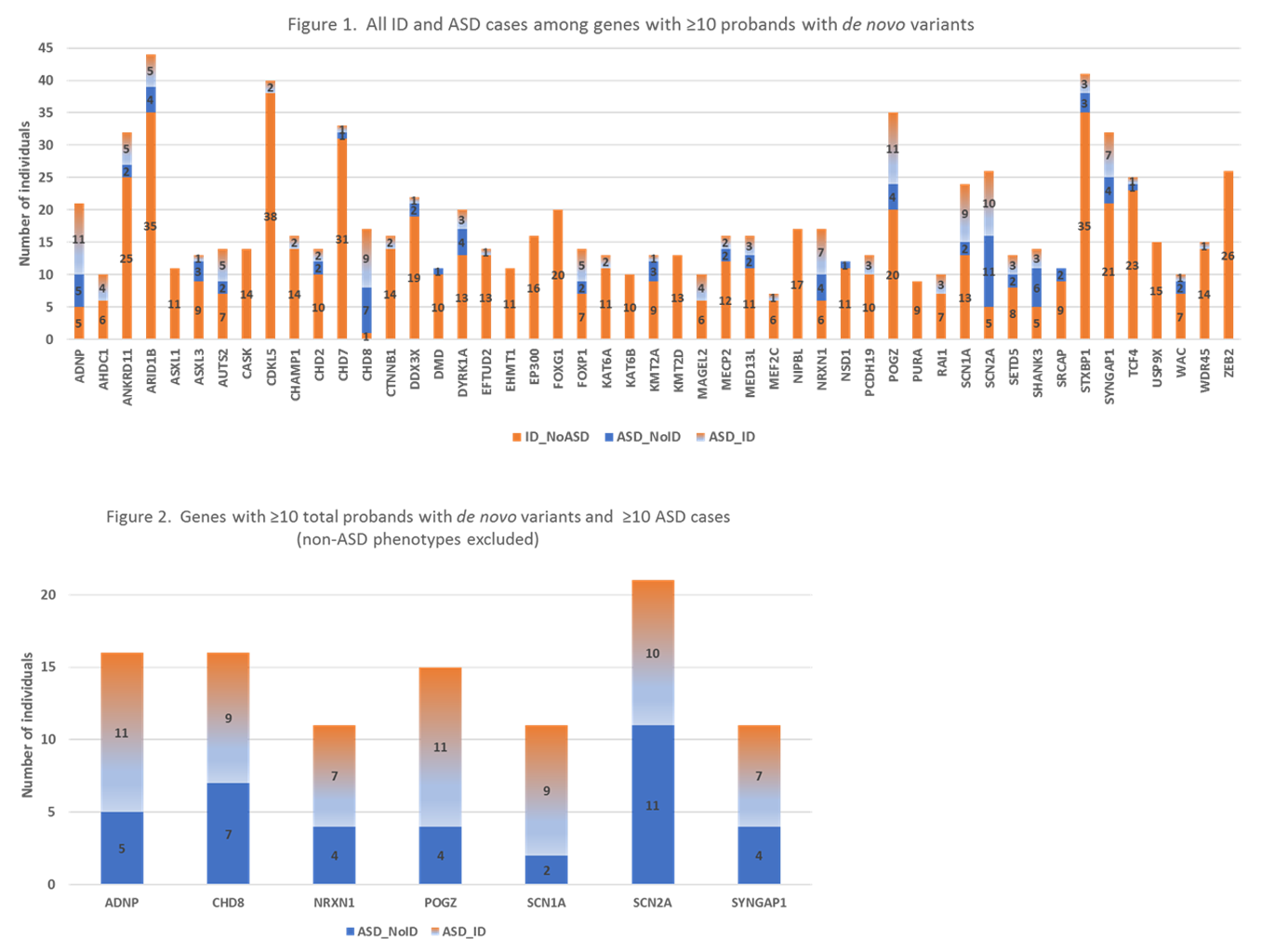