The present study capitalizes on previous reports of TD infant engagement during contingent social interaction to test whether patterns of eye-blinking can be used as a measure of infant engagement. This method is based on the fact that eyeblinks interrupt the flow of visual information; as a result, viewers unconsciously adjust the timing of their own eye-blinks to minimize the likelihood of missing important information. Consequantly, the more engaged the viewer is, the more likely they will be to inhibit blinking (Shultz, Klin, & Jones, 2011, PNAS). This measure could provide new inroads for quantifying the subjective experiences of infants as they interact with their caregivers, enabling future research into disruptions to foundational mechanisms of social learning in ASD.

Objectives: To determine if patterns of eye-blinking can be used to measure engagement during contingent and non-contingent social interactions in 3- to 5-month-old TD infants.

Methods: Eye-tracking data were collected from 3- to 5-month-old TD infants (N=14) while viewing 3 conditions: 1) a prerecorded non-contigent video of a stranger; 2) a live video feed of the infant’s caregiver (see Figure 1); and 3) prerecorded non-contingent videos of the infant’s caregiver. Mean blinks per minute (bpm) were calculated and compared across conditions.

Conclusions: Preliminary findings suggest that eye-blink rates can provide a useful index of infant engagement, with TD infants blinking less during contingent, compared with non-contingent, social interactions. This study advances a useful framework and novel measure for future work investigating the influence of engagement on learning within the context of reciprocal social interactions in typical development and in ASD. 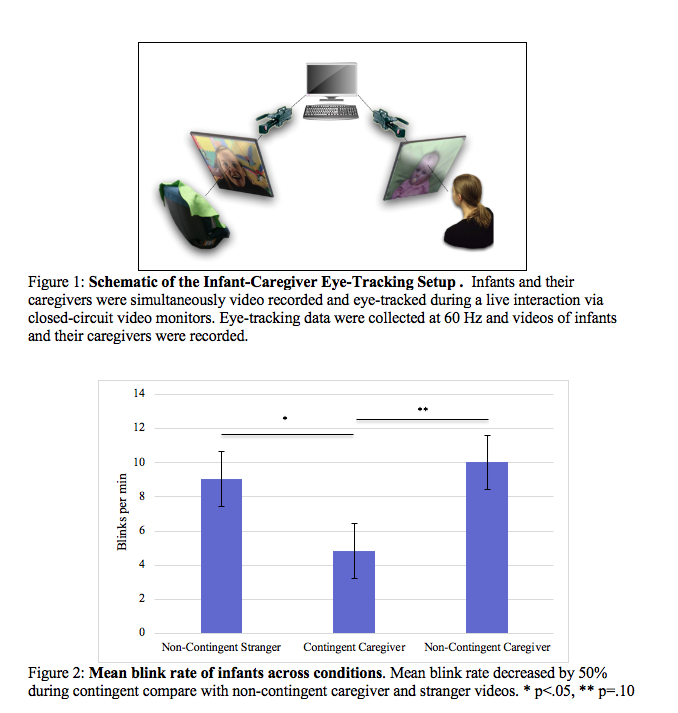