Autism Spectrum Disorder (ASD) is characterized by deficits in social communication and interactions, including responding to and initiating social overtures. Little is known about the developmental progression of these skills within the second year of life for either neurotypical children or children with ASD. Furthermore, social functioning is not binary; it is not restricted to typical development (TD) and severe impairment. Rather social functioning exists along a full spectrum, known as the Social Spectrum (Dowd et al., 2018), to account for the variability in social functioning within TD and also within ASD. Research is needed to identify the developmental trajectories of crucial early social skills and the deviations in development across the Social Spectrum.

Infants at high-risk (N=19) and low-risk (N= 22) were assessed using the Early Social Communication Scales (ESCS; Mundy et al., 2003) at 12, 15, 18, and 24 months, and the Autism Diagnostic Observation Schedule – Second Edition –Toddler Module (ADOS-2-T; Lord et al., 2012) at 12 months. The ESCS is a semi-structured, play-based assessment that is behaviorally coded offline from video; it yields frequency scores for IJA, RSI, ISI, and IBR, as well as a percent correct score for RJA. Additionally, IJA is comprised of the sum of higher and lower level skills (i.e., IJA = HighIJA + LowIJA). The Social Affect section of the ADOS-2-T algorithm was used as a measure of Social Spectrum at 12 months. Linear mixed-effects models will be conducted separately for each skill, with Age, Social Spectrum, and their two-way interaction as predictors. Non-significant interactions and main effects will be removed to yield optimal models.

Identifying the developmental trajectories of crucial early social skills and deviations in development across the Social Spectrum, may inform our understanding of the developmental model of ASD and help establish timeframes and target areas for early invention for children with varying degrees of social impairment. Results suggest that while some social skills (RJA; ISI; HighIJA) are improving over time, other skills are either declining (RSI), perhaps as more advanced skills emerge, or not progressing (IJA), perhaps as mastery has already occurred. Additionally, developmental differences were apparent across the Social Spectrum for some (RJA; IBR), but not all social skills, suggesting that these skills may be important intervention targets for infants with greater social impairment at 12 months and may provide meaningful information about later development. 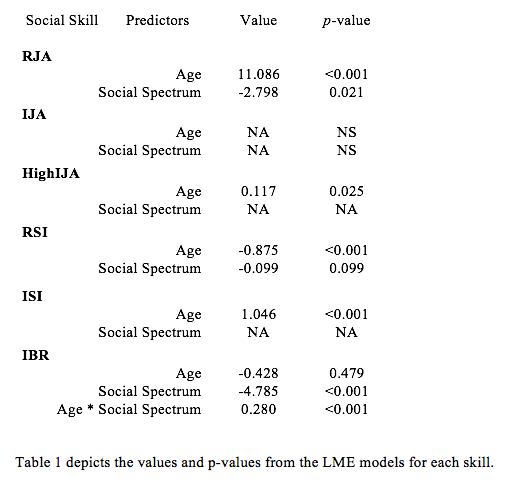