1) Assess whether emotion recognition accuracy is higher for individuals with less ASD-related traits.

2) Determine if subjective ratings of emotional intensity are associated with measures of ASD-related symptoms.

Methods: We assessed emotion recognition accuracy and subjective ratings of emotional intensity using videos of actors saying the same phrase while expressing different emotions, both facial expressions and auditory prosody, at varying intensities. Following each video, individuals reported which emotion the actor just expressed and rated the intensity of the emotion on a scale of 1-9. Each actor expressed anger, disgust, fear, happiness, sadness, and surprise at low and high intensity, as well as a non-emotive control condition. Trials were gaze-controlled to ensure that individuals were looking at the screen prior to each video being presented. Autistic traits were measured using the Broad Autism Phenotype Questionnaire (BAPQ), and social competency was measured using the Multidimensional Social Competence Scale (MSCS). Mean accuracy and intensity ratings were calculated and correlated with levels of autistic traits. This study is ongoing and has collected data from typically-developing (TD) young adults (n=29).

Conclusions: Results from this on-going study suggest that subjective intensity ratings of emotions are related to autistic traits. Interestingly, these associations were in the expected direction for some, but not all, of the subscales of interest. As social inferencing and emotion regulation are necessary for comprehending cues in social contexts, it was unsurprising that these related to subjective ratings of emotion intensity. One would predict that empathic concern, however, would also be positively correlated with intensity ratings. It is possible that the negative association may be mediated by other factors, for instance, anxiety, where a disassociation between the concern for another’s emotional state can be overshadowed by the internal perception of the emotions being displayed. Similarly, the negative correlation between subjective emotion intensity ratings and pragmatic language may be influenced by factors related to anxiety or influenced more by visual features of the face rather than the auditory prosody of the stimuli. As these findings are found in TD individuals with varying levels of ASD-related traits, further investigation is needed to determine if these results are also found for individuals clinically diagnosed with ASD. 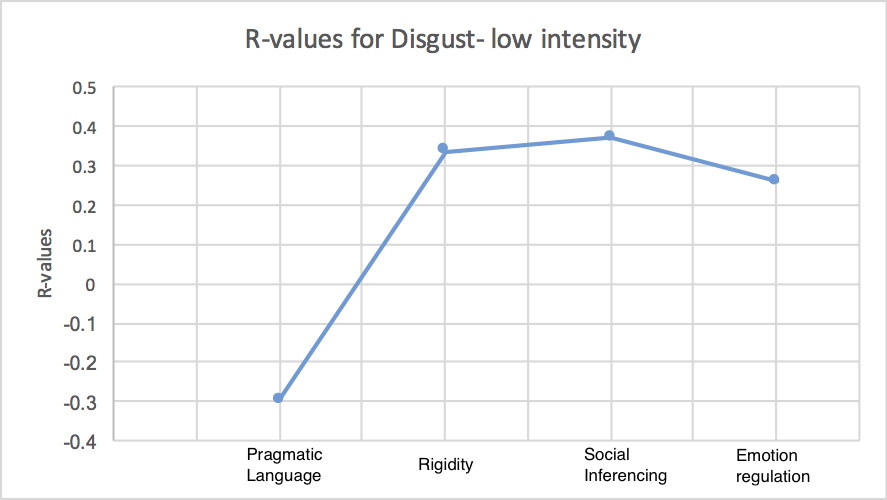