Studies have consistently reported that children with autism spectrum disorder (ASD) show impaired performance of skilled motor gestures, consistent with a developmental dyspraxia. Praxis may therefore serve as a biomarker informative to diagnosis and intervention. There is increasing awareness that autism presentation may differ in girls and boys. Despite this, there has been limited investigation of the impact of sex on praxis in autism.

To examine the impact of sex on praxis and its association with morphology of relevant frontal-parietal circuits in children with ASD and typically-developing (TD) peers.

Data from 165 participants (55 girls, 42 ASD) balanced on age, socioeconomic status (SES), IQ, and handedness. Praxis was assessed using the Florida Apraxia Battery, modified for children (total percent correct). The volumes of the left and right inferior parietal cortex (IPC) and the premotor cortex (PMC), structures important to praxis, were processed with Free-surfer. Multiple regression analyses was performed to investigate: 1) the effect of diagnosis, sex, and interaction thereof (diagnosis*sex) on praxis performance, and 2) associations of brain volumes with praxis performance and effects of diagnosis, sex, and diagnosis*sex on the relationship between IPC and PMC morphology with praxis performance; significant associations were followed-up with Pearson correlations.

Multiple regression revealed a significant effect of diagnosis (p=.000). Effect of sex and diagnosis*sex were not significant. Effect sizes were strong for both girls and boys, although somewhat stronger for boys (see Table 1). Regression analyses of brain-behavior associations revealed that for right hemispheric IPC and PMC there was a significant diagnosis*sex interaction (F(1, 157)=4.5714, p=.0341; F(1, 157)=9.6430, p=.0023 respectively) (see Figure 1). Specifically, for right IPC and PMC volumes, TD girls showed significant positive correlations, such that higher volumes correlated with better praxis score (r(40)=.343, p=.028); whereas, girls with ASD showed significant negative correlations such that higher volumes correlated with worse praxis score (r(13)= -.744, p=.002). No significant correlations were observed for boys or for left hemisphere in girls.

Girls and boys with ASD both showed impaired praxis performance compared with their TD peers. The findings suggest that performance of skilled motor gestures is broadly impaired in children with autism. Investigation of brain-behavior associations revealed a pattern specific to girls. For girls with ASD, impaired praxis was found to be associated with larger volumes within a frontal-parietal praxis network (in contrast to TD girls who show better praxis with larger volumes). The findings suggest that right hemisphere morphology may uniquely contribute to dyspraxia in girls with autism. 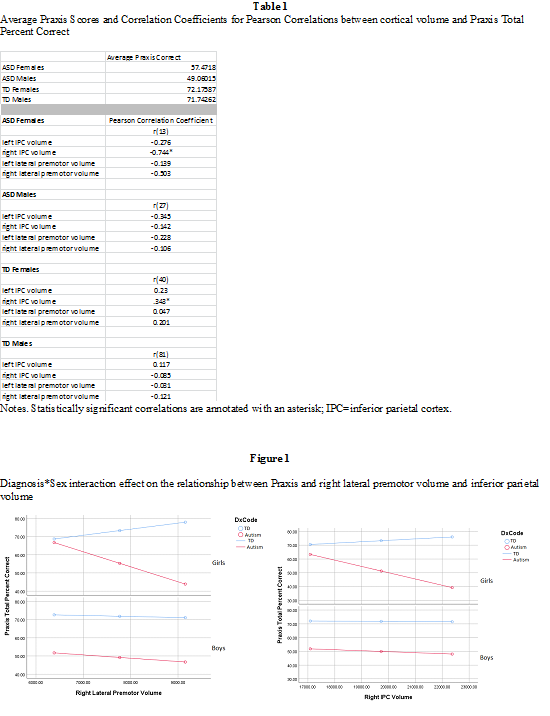