Objectives: To explore interactions among language, race, and variables characterizing the ASD diagnostic process among children evaluated at a metropolitan autism clinic that sees all children regardless of ability to pay.

Methods: De-identified clinical records of children (n=13516) seen at a high-volume metropolitan Autism Clinic were examined. Participants whose first visit was not captured, and Race groups that could not be interpreted or analyzed were excluded (remaining, n=10090) (1a).

Results: (1b) ANOVA looking at Age of First Visit by Race and Language indicated main effects of Race (p<.001), marginal interaction Race*Language (p=.09), and no effect of Language. In English-Speaking Homes, White children had a First Visit at an older age than other races. (1c) A similar logistic regression examining First Visit ASD diagnosis probability controlling for Age indicated Race (p<.001) and Age (p<.001), but no other, effects. Hispanic children were diagnosed with ASD less often than Asian (p<.001), Black (p<.001), and White (p=.03) children, but not children of Mixed Race (p=.13). Asian Children received an ASD diagnosis more often than White children (p=.02). (1d) 94.3% (n=3747) of children who received a diagnosis of ASD at their first visit retained their diagnosis by their last visit. However, 41.8% (n=2109) of children who did not receive an ASD diagnosis at their first visit had an ASD diagnosis at their last visit (though this sometimes only reflected delays in seeing specific staff); 58.2% (n=2939) remained without an ASD diagnosis. (1e) We examined the probability of ASD diagnosis by Last Visit (by Race and Language), controlling for age of First Visit, in children without an ASD diagnosis at First Visit. Race (p<.001) and Age (p<.001), but no other, effects were observed. Asian Children transitioned Non-ASD→ASD more often than all other Races (ps<.03) except Black Children (p=.15); Black Children transitioned Non-ASD→ASD more often than Hispanic Children (p=.05). (1f) We examined ANOVA to examine ASD Diagnosis Delay (Age when First Diagnosed with ASD - Age of First Visit) in children who transitioned Non-ASD→ASD. Both Race (p=.03) and home Language (p=.02) contributed significant variance in predicting Diagnosis Delay. However, results were difficult to interpret, with wide confidence intervals, and only one clearly significant contrast (among Children who spoke English at Home, Asian Children had a shorter delay to receive a diagnosis as compared to White Children, p<.01).

Conclusions: Results suggest a limited, but nuanced role of home language in the ASD diagnostic process of this high-volume clinic. Results show parallels to Becerra et al. 2014 despite not being an epidemiological survey, and the late average age of diagnosis. Mechanisms underlying higher diagnostic rates of Asian and lower of Hispanic children at multiple points in the diagnostic process need to be clarified. Younger child ages associated with non-English speaking families may reflect on the service such a center provides to the community. 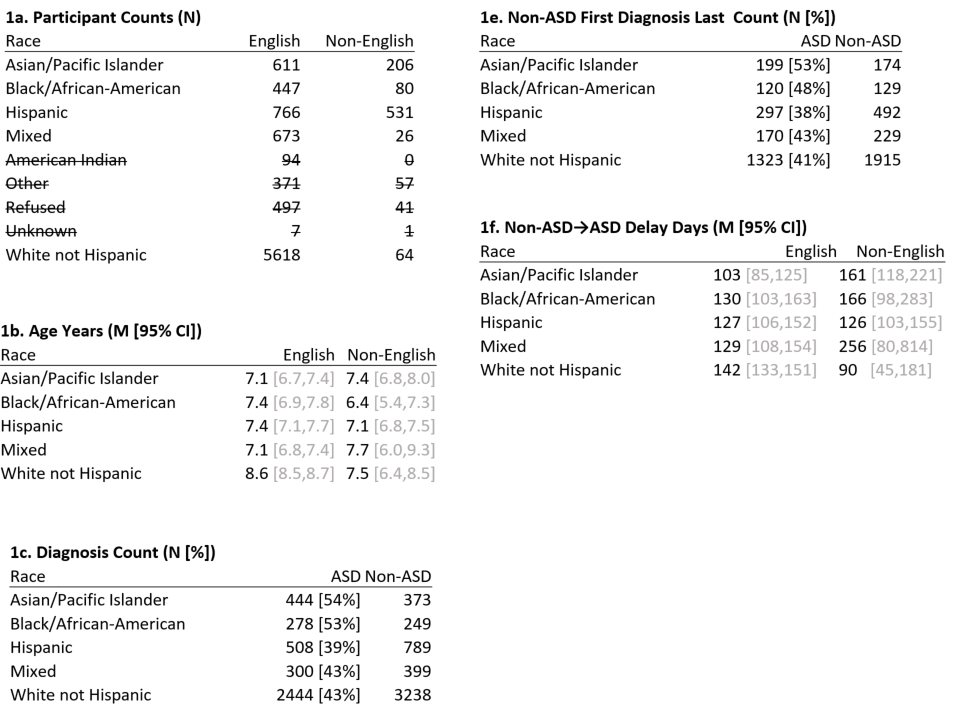