Research suggests that children with Autism Spectrum Disorder (ASD) learn words from association (e.g. Akechi et al., 2011; Baron-Cohen, Baldwin & Crowson, 1997; Preissler & Carey, 2005). However, these findings may reflect cognitive delay rather than autism per se; and the associational binding between a word may more simply refer to spatio-temporal position or the nature of the symbolic reference by which attention is drawn. Little research to date has compared the influence of different symbolic cues to prompt the child to the link between a spoken word and its intended referent.

The three objectives of the research were: to examine the nature of association in word learning within a group of children with ASD with varying verbal mental age (VMA), comparing different symbolic gestures (an arrow, illumination of the object, both, or both but identifying different objects); to investigate the effect of spatio-temporal location on children’s word-object mappings; and to tease apart the effects of intellectual disability and autism, by comparing children with ASD to children with intellectual disabilities (ID) and a typically developing (TD) cohort.

Children (Ns: TD = 32; ASD = 31; ID = 22) watched a video of a speaker labelling novel objects. One referent was presented with a cue highlighting attention (i.e. arrow next to the object, light illuminating the object, or arrow and light concurrently presented) as the speaker uttered a novel word. After the video, children were asked to indicate the target referent. On half the trials, the position of the objects was reversed.

The findings are depicted in Figure 1 and Table 1.

· As would be expected, when the arrow and illumination (light) conflicted children in all three groups were at chance.

· The arrow cue, presented alone or with illumination, enabled children with ASD to perform above chance in learning a new word.

· Word learning occurred when the objects remained in position and when they were reversed.

· (not shown in Table 1 or Figure 1) children with ASD with a higher VMA (mean of six-years-old) tended to perform better than those with a lower VMA (mean of three-years-old), particularly for the arrow trials and reversed position trials

Word learning in ASD is not simply an association between a word and a place – it refers to the object being labelled. We also found that word learning is influenced differentially by the cue which accompanies a label. Children with ASD learn words from arrows but not object illumination and originally only map object labels to particular spatial locations. The three populations showed differences in word learning from the cues relative to each other (see Figure 1). These results emphasise the importance of studying different types of associative cue, a varying VMA range of children and including children with ID as controls in ASD research. Further analysis of these influences might provide insights into how children in various groups grasp word-referent connections. 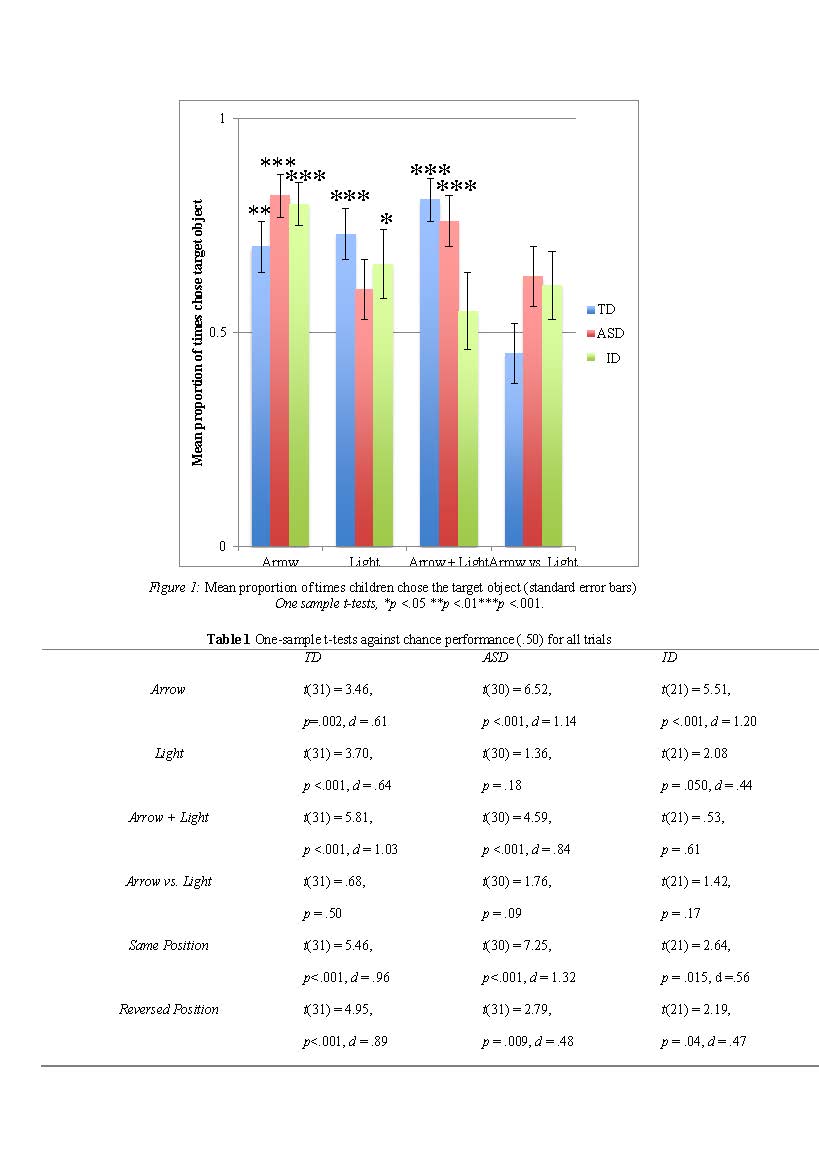