Golden Gate Ballroom (Marriott Marquis Hotel)
W. Jamal1, N. Hadjikhani2, J. A. Christodoulou3, A. Cardinaux1, L. Vogelsang4, M. M. Kjelgaard5 and P. Sinha1, (1)Massachusetts Institute of Technology, Cambridge, MA, (2)MGH/ Martinos Center for Biomedical Imaging/ Harvard Medical School, Charlestown, MA, (3)Dept. of Communication Sciences and Disorders, MGH Institute of Health Professions, Boston, MA, (4)University of Osnabrück, Osnabrück, Germany, (5)MGH IHP, Arlington, MA
Background: The human brain extracts probabilistic information from relations between events in the environment. Such learning underlies our ability to anticipate changes. The Predictive Impairment in Autism (PIA) hypothesis, recently proposed by Sinha and colleagues, posits that impaired ability to detect probabilistic regularities over time may be a key cause of seemingly unrelated symptoms in autism (e.g., social, language, and motor impairments). The Weather Prediction Task (WPT) is a probabilistic learning task that serves to test this hypothesis. Besides revealing behavioral performance differences, it also allows the study of the function of cerebellar and frontostriatal circuits in prediction while eliminating the potential confounds of social rewards. The functional integrity of neural substrates of skill- and probabilistic-learning in autism are not known.

Objectives: To assess: 1) Performance of individuals with autism spectrum disorders (ASD) on the WPT and 2) Differences between prediction-evoked neural activations in ASD and typically developing (NT) participants.

Methods: Participants were age and gender-matched ASD and NT adults with average range IQ. Each participant completed the WPT, which requires gradual integration of probabilistic information, outside and in an MRI scanner. During behavioral trials, the participant sees a combination of 1-3 cards from a set of 4 cards and indicate via button press either sunny or rainy weather outcomes with immediate feedback. Each card is probabilistically associated with a unique predictive value (likelihood) of sunny weather. Some cards have high predictive value, but none is a deterministic indicator of outcome. Through repeated presentations, participants learn the predictive value of cards to estimate weather outcomes. Responses are considered accurate when a participant selects the weather most highly associated with the probability of the combination of cards presented. Thus the accuracy reported represents the ability to build a probabilistic model for each card across a number of trials. Participants first complete a 200 trial behavioral training session, followed by 64 trials (without feedback) during fMRI scanning. A deterministic control task in the scanner presents a combination of 1-3 cards with either sunny or rainy symbols and requires participants to choose the weather in a 2AFC setting.

During fMRI, the NT group showed greater activation for experimental vs control tasks, and increased activation compared to ASD in the thalamus, the basal ganglia (caudate and putamen), and in the ‘social brain’ (TPJ, STS, vmPFC, IFG, anterior insula, temporal pole, and amygdala). Importantly, this finding was partly driven by greater activation during the control task in ASDs versus NT participants.

Conclusions: The WPT is a non-social prediction task that can reveal both behavioral and functional differences in ASD. This task did not reveal cerebellar differences in the pilot group, but revealed decreased activation in frontostriatal circuits and in the so-called social brain in ASD. This study offers preliminary evidence for PIA hypothesis by demonstrating prediction deficits behaviorally and hypoactivation in systems that rely on predictive learning capacity distinct from known deficit areas in ASD. 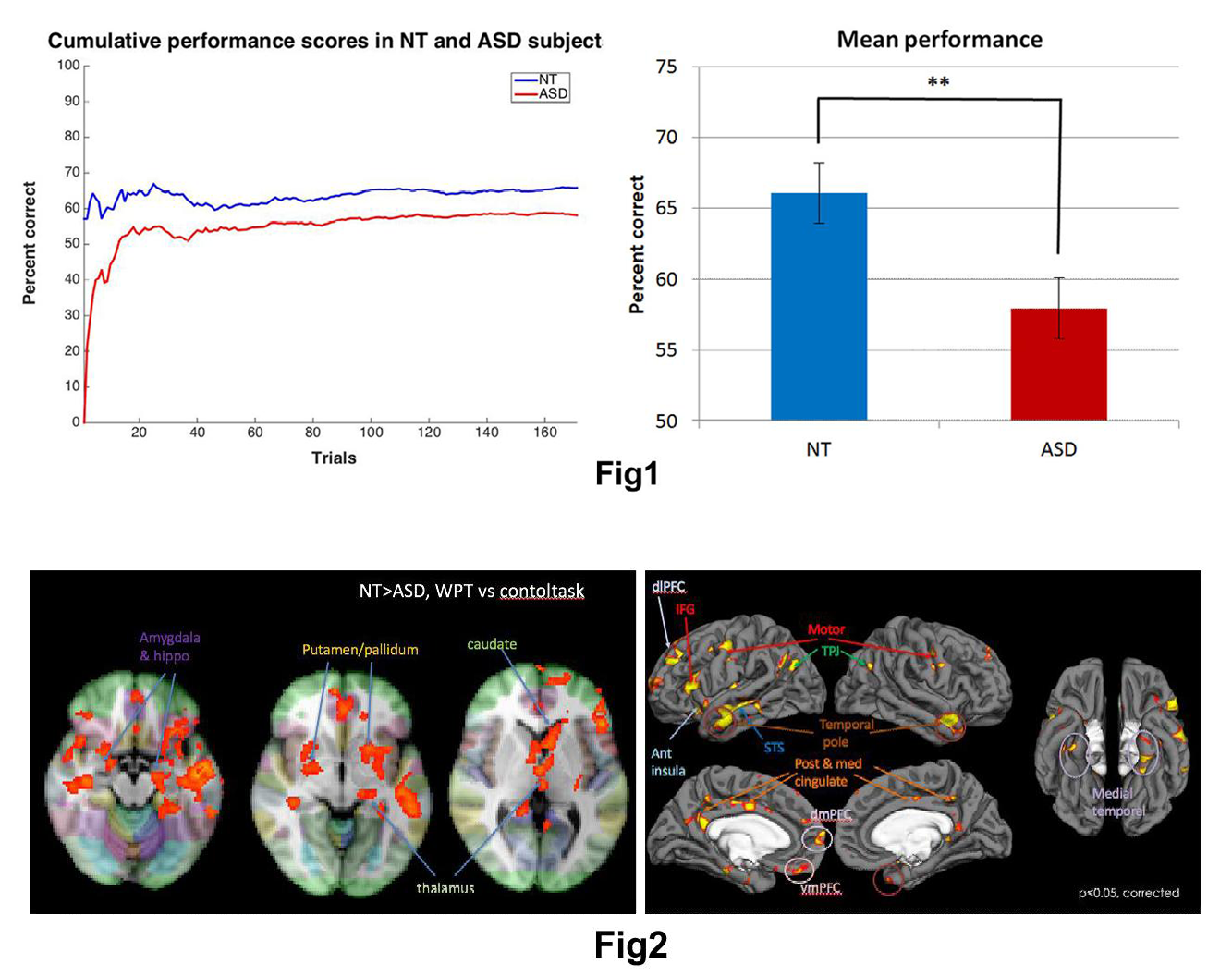