Golden Gate Ballroom (Marriott Marquis Hotel)
A. R. Canfield1, B. Castelluccio1, A. Hogstrom1, J. J. Green1, C. Irvine1, R. M. Theodore2 and I. M. Eigsti1, (1)Department of Psychological Sciences, University of Connecticut, Storrs, CT, (2)Speech, Language, and Hearing Sciences, University of Connecticut, Storrs, CT
Background: ASD is characterized by enhanced low-level acoustic processing[1]. Little is known about how heightened low-level acoustic processing in ASD interacts with speech production and with auditory hypersensitivities. This study investigates the production of acoustic detail in speech by probing phonetic convergence, a phenomenon in which, after engaging in a cooperative sociocommunicative task, talkers tend to produce speech sounds that are more similar to their interlocutor than the same sounds produced prior to the task[2]. Previous research indicates that children with ASD are less likely to adopt speech characteristics including dialect[3], but no research to date has looked at more specific phonetic characteristics. We predicted that individuals with ASD would show reduced phonetic convergence, and that differences would be associated with social abilities and sensory sensitivities.

Methods: Twenty-three teens with ASD (n=10) and typical development (TD; n=13) (of a final sample of 30) engaged in 30- to 45-minute interactions with a research assistant. Participants were ages 12-18 years (M=15) with IQ scores (>85) and hearing abilities (pure-tone hearing screen) in the normal range. In the dyadic interaction, the “guide” directs the “tourist” to find a route on a series of six maps via verbal instructions (an opaque barrier blocked nonverbal communication). Partners alternated between guide and tourist roles. Before and after the interaction, participants and RAs produced a set of utterances designed to elicit exemplars of multiple phonemes. Exemplar recordings were subjected to acoustic measurements of voice-onset-time for /p/, /t/, and /k/; phoneme duration for /s/; centroid frequency for /s/; articulation rate; and fundamental frequency. Accordingly, the acoustic measurements afford examination of convergence for both temporal and spectral properties of individual speech sounds in addition to global prosodic properties. Measurements were made by a team of trained coders using the waveform and spectrogram displays in Praat to identify regions of vocal energy associated with each measurement.

Results: Analyses (ongoing) focus on phoneme duration for /s/. For each dyad, we calculated the absolute value of duration differences (subject minus RA) before and after their interaction. These values were analyzed via repeated-measures ANOVA, which revealed a significant group (ASD vs. TD) by time (before vs. after) interaction, p<.05. A correlational analysis of the difference in duration after the interaction and ASD severity (SCQ score) approached significance, p=.08; greater severity was associated with less convergence. Hypersensitivity on the Sensory Profile was associated with less convergence, p=.03.

Conclusions: Given strengths in auditory processing, one might expect heightened sensitivity to phonetic qualities in ASD. Instead, dyads including teens with ASD were less likely to modulate phonetic qualities to conform to interlocutors compared to TD teens. Lesser convergence was associated with symptom severity (weakly) and with sensory hypersensitivities. Prior research[2]  suggests that socially influential participants show more convergence than less influential ones; these preliminary results suggest that phonetic convergence is socially complex, and reflect not just auditory processes but also social influence. 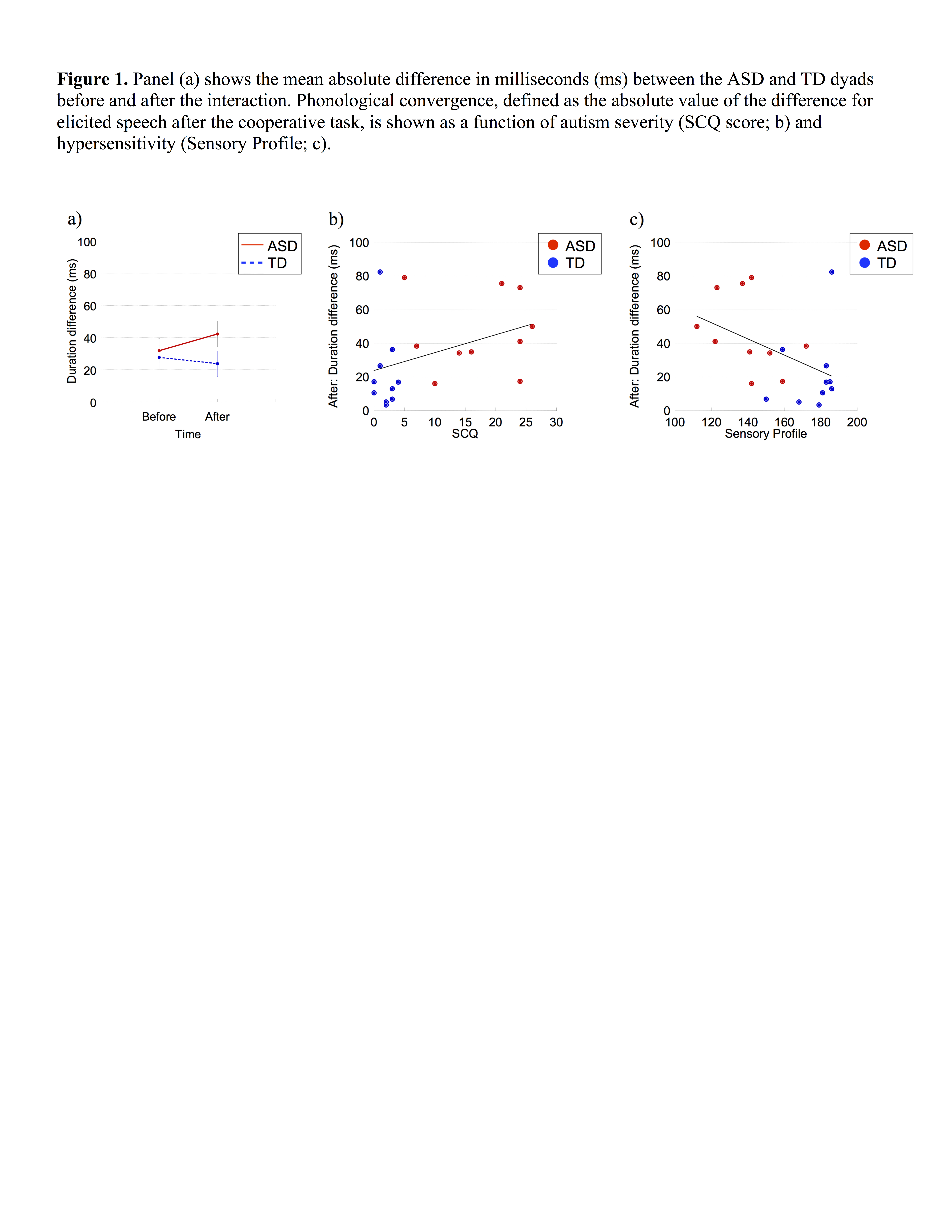