Although social-communication deficits are central to Autism Spectrum Disorder (ASD), little research has examined how communication changes in real time as social interactions unfold. In typical populations, conversational partners become more efficient communicators as they establish a shared vocabulary, or common ground. Other subtle phenomena, such as matching word choice, syntax, and prosody, as well as mimicking one another’s hand gestures, are also observed. Some research shows that individuals with ASD employ a range of these skills; for example, interlocutors with ASD doestablish common ground with interactive partners, pointing to pragmatic strengths in this population. The current study extends prior research by including information about nonverbal communication – specifically, co-speech hand gestures.

To identify how patterns of behavior change as conversation progresses over time.

Adults with ASD (n=24) and age-, gender, and IQ-matched typically developing controls (TDC; n=10) completed a five-trial collaborative referential communication task designed to elicit spontaneous back-and-forth conversation in a controlled setting (analyzed data on 14 remaining TDCs will be available by IMFAR2017). Participants were shown a grid of eight abstract figures and tasked with describing the figures to a confederate with the goal of ordering them correctly. Each trial included the same stimuli in a different order, thus participants described each figure 5 times. All hand gestures were tagged and coded for how much supplementary information (i.e., information not present in speech) they included, and for their size of execution.

Like controls, adults with ASD shorten their discourse as conversation unfolds, consistent with recent findings that adults with ASD are responsive to common ground manipulations (Nadig, Shivani, & Sasson, 2015). Across groups, co-speech gestures presented the same amount of supplementary information throughout the task, suggesting that the content of nonverbal communication remains consistent throughout conversation. However, group differences were marginally significant in changes in gesture size, which may be a marker of engagement or effort exerted in the interaction. While TDC participants maintained their gesture size, participants with ASD showed a sharp decrease in gesture size between trials, potentially reflecting a decrease in social motivation as the task (and thus, the interaction) becomes less novel and engaging. 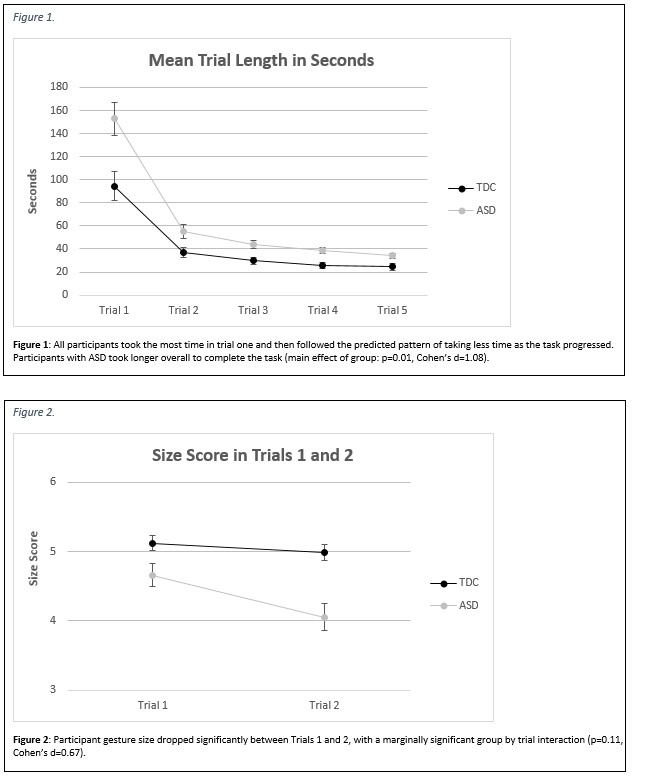