Objectives:  (1) To identify case-control differences between ASD and control participants in a diverse sample, ranging in IQ between 50-120, and 6-30 years of age. (2) To stratify the ASD group by whether, and how far, each individual diverges from their age expected performance. (3) To link WM ability with autism symptomatology (social responsiveness SRS-2, repetitive behaviour RBS-R) and adaptive behaviour (Vineland).

Methods:  From 6 research centres in 4 European countries, 390 individuals with ASD and 293 individuals with typical development (or mild intellectual disability) were tested on a visual-spatial WM task. The task required participants to remember the location of 4, 6, or 8 telephones in a visual array. The dependent measure was between-trial errors: the number of times a participant re-selected a target phone from a previous trial. We classified the WM skills of ASD individuals using Gaussian process modelling (GPM) by first estimating WM ability across age for TD individuals. We derived the extent to which individuals with ASD deviated from the estimated TD mean (within 1 SD, 1-2SDs, or >2SDs of the estimated mean for their age).

Results:  Case control analysis demonstrated overall higher between-participant errors in the ASD group, across the 4 (p<.001, d: 0.294), 6 (p<.001, d: 0.388), and 8 (p<.001, d: 0.422) conditions. However, when the sample was split by age groups, this effect was only significant for adolescents and adults. Individuals with mild intellectual disability performed similarly regardless of an ASD diagnosis. We then carried forward the load 8 condition as a discrimination tool for GPM stratification. Despite the significant between group differences, 62.82%, of the ASD sample performed within +/-1 SD of the TD range. Only 19.50% of the ASD cohort performed <1SD and 11.54% performed <2SD of the age-related means. WM performance correlated with symptom severity, SRS-2 (r= .34), RBS-R (r = .22) and adaptive functioning (r = -.27) (all ps <.01).

Conclusions:  Across a large sample, we demonstrate that case control differences varied with age, with significant group differences for the adolescents and adults only. Despite this, stratification analysis demonstrated that the majority of cases fell within 1SD. These relatively small impairments may have greater clinical significance if they co-occur with difficulties in other areas. The small percentage who had WM impairments in a clinically significant range, might indicate a sub-group suitable for treatment targets. 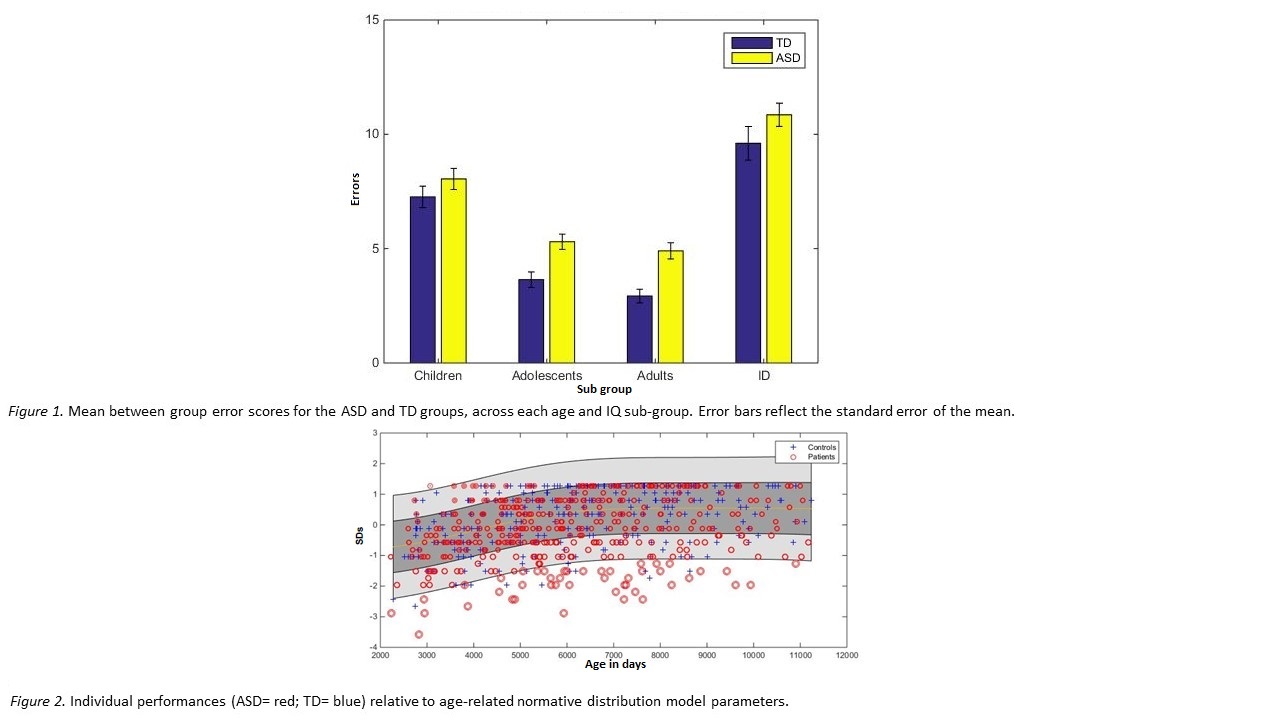