Numerous studies have emphasized abnormal eye gaze as a key characteristic in individuals with autism. However, a limited number of findings have been replicated, the magnitude of effects is unclear, and the pattern of gaze differences across stimuli requires further investigation. Eye gaze studies offer a unique window into the selection of information for attention and cognitive processing. As such, findings across studies can inform disparate cognitive theories of autism, including the distinction between specific deficits in social-emotional cognitive processing versus more general non-affective cognitive dysfunction.

The first aim of the present study was to conduct a comprehensive multivariate meta-analysis of autism eye tracking studies to establish whether gaze differences relative to healthy and developmental disability controls are present and to determine the magnitude of these differences. The secondary aim was to evaluate the influence of specific study demographic and methodological factors influencing eye gaze differences. Specifically, we were interested in the magnitude of differences across different stimuli and regions-of-interest (ROIs) as this may inform cognitive theories of autism.

A comprehensive search was completed using PubMed supplemented by a manual search. 1132 publications were initially identified for closer inspection. Inclusion and exclusion criteria were applied to identify only those studies reporting sufficient information to compute effect sizes comparing individuals with autism to healthy or developmental disability controls on eye gaze measures of fixation or looking time. A wide range of study demographic, clinical, methodological, stimulus, and ROI characteristics were coded. A blinded second rater coded 10 studies representing 62 group comparisons. Inter-rater reliability was consistent for each variable (Κ=.81-1.00, absolute agreement=91.3%-100%). An initial methodological mixed-effects meta-regression model was estimated with study characteristics as moderators. Next, a conceptual multivariate mixed-effects meta-regression model examined the impact of stimulus and ROI features while adjusting for significant methodological characteristics from the initial model.

Individuals with autism show a reliable pattern of eye gaze abnormalities that suggests a problem with basic discrimination of irrelevant non-social from socially-important information. This difference appears to be persistent across age and worsens during observation of human interactions. These findings support social processing deficits as a core feature, consistent with social cognitive theories of autism. Eye gaze abnormalities in autism were of sufficient magnitude that, if combined across stimuli and ROIs, could yield clinically-useful risk assessment and serve as quantitative, objective outcome measures. 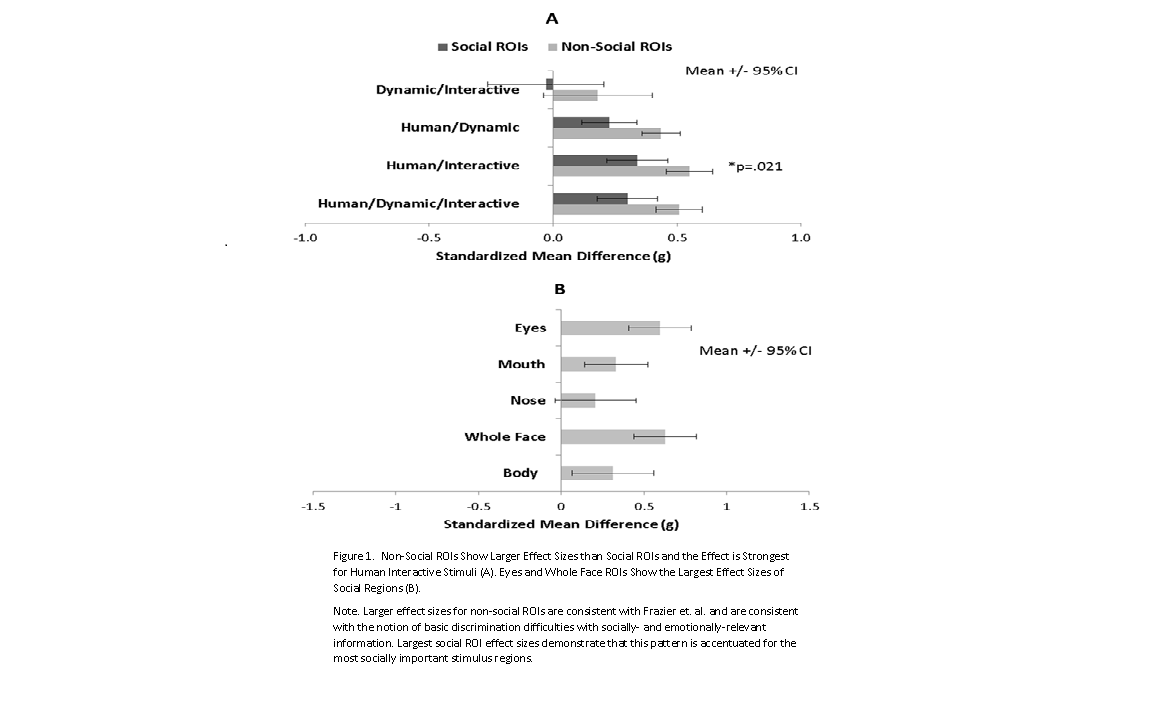