The pupil is known to reflect underlying neurologic function as well as a range of psychological and physiological variables, including cognitive effort, arousal, attention, and even learning. Within autism spectrum disorder (ASD), several studies have found atypical pupil size and/or atypical pupil response profiles relative to control populations. As we have come to understand the heterogeneity of ASD and other neurodevelopmental disorders, the relationship between quantitative traits and physiological markers has become increasingly more important, as this may lead us closer to the underlying biological basis for atypical responses and behaviors.

Here, we implement a novel paradigm designed to capture patterns of pupil adaptation during sustained periods of dark and light conditions. We also investigate the relationship between pupil metrics derived from this novel task and quantitative behavioral traits associated with the autism phenotype.

Our sample included children seen at a neurodevelopmental clinic, including those with and without an ASD diagnosis, as well as those with other diagnoses (ADHD, ODD, fetal alcohol syndrome); N=42 children, ages 5 to 16 years (mean age= 8.95 ± 2.59; n=21 males; average FSIQ= 104.45 ± 17.60). Participants were characterized using a phenotyping battery that included the Social Responsiveness Scale-2nd Edition (SRS), a parent-report measure that assesses quantitative impairments in social awareness, cognition, communication, motivation, and repetitive behavior/restricted interests that define ASD. Participants completed a passive viewing eye tracking task during which alternating dark (black screen) and light (white screen) stimuli were displayed. Stimuli included a 5-second black screen and a 5-second white screen that alternated across trials. Dependent variables of interest included: (1) the amplitude of dilation or constriction across each condition and (2) the latency to reach maximum dilation or constriction across each condition. Baseline pupil diameter was also extracted for each participant.

These results suggest that using our novel, yet simple, paradigm can result in meaningful pupil metrics that correlate with individual differences in autism traits, as measured by the SRS. One key difference between our paradigm and studies of the pupillary light reflex is the sustained nature of our stimulus presentation. This sustained presentation may contribute to capturing meaningful individual differences in pupillary physiology that is relevant to quantitative traits associated with the autism phenotype. These results contribute to a growing body of literature that implicates basic visual sensory anomalies in atypical social-communication deficits associated with autism. 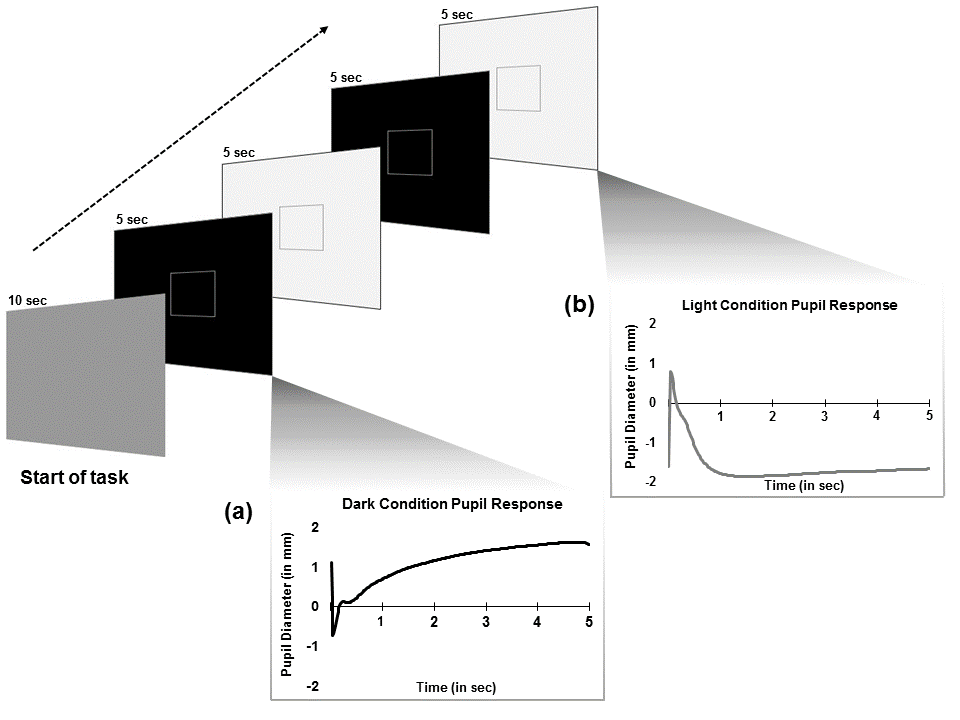