25499
Acquisition of Nouns in Young Children with ASD: Insight into Learning Processes from Item Analyses

Golden Gate Ballroom (Marriott Marquis Hotel)
S. T. Kover1, D. A. Fein2 and L. R. Naigles3, (1)University of Washington, Seattle, WA, (2)University of Connecticut, Storrs, CT, (3)Psychological Sciences, University of Connecticut, Storrs, CT
Background:  In typical development (TD), vocabulary acquisition has been proposed to result from domain-general associative learning, which, together with statistics in the environment, predicts word learning patterns (McMurray, Horst, & Samuelson, 2012). The size and contents of children’s vocabularies support these patterns (Perry & Samuelson, 2011; Samuelson & Smith, 1999). For example, TD children who demonstrate a shape bias also produce many count nouns, especially those that are organized by shape rather than material (that is, most early nouns are solids, organized by shape, and count nouns; Perry & Samuelson, 2011; Samuelson & Smith, 1999). Children with autism spectrum disorder (ASD) fail to show a shape bias (Potrzeba, Fein, & Naigles, 2015; Tek, Jaffery, Fein, & Naigles, 2008), possibly because their lexicons are organized differently (e.g., not dominated by solid+shape+count nouns). We test this by examining the solidity, syntax (i.e., count vs. mass), and category organization (i.e., shape, color, material) of nouns in the receptive and expressive vocabularies of matched samples of toddlers with ASD and TD.

Objectives:  We asked: (1) do toddlers with ASD, like TD toddlers, understand and produce more nouns on the “shape side” (solid+shape+count; e.g., cup, block) than on the “material side” (nonsolid+material+mass; e.g., rain, milk)? and (2) are “shape side” nouns acquired first such that they represent a higher proportion of nouns in children with small vocabularies?

Nouns from the CDI (n=209) were coded following Samuelson and Smith (1999) for each toddler’s lexicon. The proportion of nouns characterized by solid+shape, nonsolid+material, solid+count, and nonsolid+mass was calculated.

Conclusions: Overall, these findings suggest that the regularities proposed to support learning biases are present in the vocabularies of children with ASD: “shape side” nouns dominate the vocabularies of children in both groups regardless of vocabulary size. Despite this, their performance reveals no consistent shape bias during word learning (Potrzeba et al., 2015). It is possible that children with ASD, rather than lacking the data (vocabulary) are instead lacking the processes by which the data could be analyzed. That is, the process of lexical learning may develop distinctly in children with ASD due to the ways in which or the extent to which these regularities and their organization are utilized over time (Ellawadi, Fein, & Naigles, 2016; Tek et al., 2008). The current study has implications for theories of lexical acquisition in ASD, including shared mechanisms with typically developing children and the role of prior knowledge. 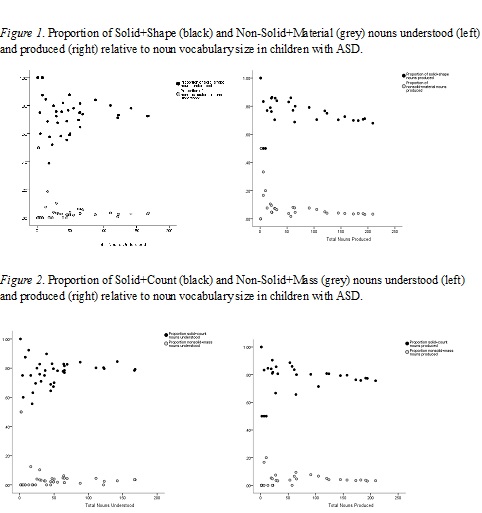