26347
Identifying Cultural Differences and Commonalities in Autistic Traits across India, Japan and the UK Using the Autism-Spectrum Quotient (AQ)

Objectives: Our study aimed to identify and compare the items on the Autism-Spectrum Quotient (AQ)-Child (Auyeung et al., 2008) most predictive of an ASD diagnosis among children aged 4-9 years across different samples from India, Japan and the UK.

Methods: Parent-reported AQ-Child data were collected from 73 children with a formal ASD diagnosis and 81 neurotypical children from India (previously reported in Rudra et al., 2014); 116 ASD and 190 neurotypical children from Japan (data not previously reported), and 488 ASD and 532 neurotypical children from the UK (some data previously reported in Allison et al., 2012). None of the children included had a reported diagnosis of intellectual disability. Participants from each country were randomly allocated to derivation and validation samples. For each item, Discrimination Indices (DI) and Positive Predictive Values (PPV) were calculated using the derivation and validation samples respectively. Items surpassing a discrimination index (DI) threshold of 0.5 and a positive predictive value (PPV) of 0.7 within each country were considered highly discriminative for that culture. Such items were compared across cultures. The psychometric validity of the “red flag items” was assessed using Receiving Operating Curves (ROC curves), discriminant analysis, Cronbach’s alpha and Pearson’s correlation coefficient.

Conclusions: In a cross-cultural study of children with intelligence in the normal range, there was cross-cultural overlap in the items most predictive of an autism diagnosis, supporting the notion of global universality in autistic traits and the possibility of adapting an existing tool for cross-cultural screening. Subtle cultural differences were suggested in four items, which may be related to contrasting sociocultural values and attitudes such as social conformity and uncertainty avoidance (Hofstede, 2001). These findings can inform the development of a brief “red flag” global screening tool for ASD. 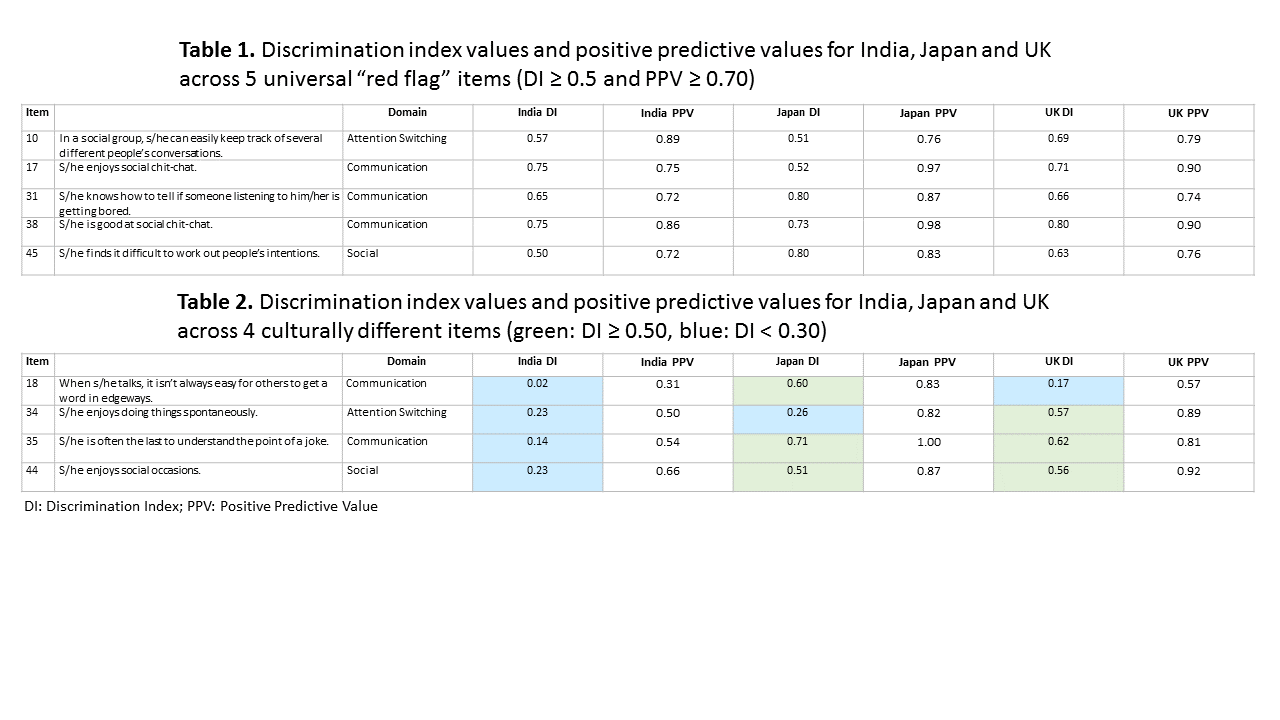