Objectives: The present study investigated whether ASD children could catch up to the level of gestural production in age-matched typically-developing (TD) peers in both trained and novel situations. If so, their accuracy in producing intransitive gestures would be on par with that of age-matched TD peers. Otherwise, children with ASD would still performed poorer than their TD peers.

Methods: ASD children(N=30;4;2-6;11;SD=.62) were randomly assigned to two conditions: intervention and wait-list control. ASD children in the intervention condition(N=15) were taught 14 intransitive gestures (e.g., welcome, awesome) demonstrated by a social robot, NAO, who was narrating different stories. There were four training sessions, twice per week. ASD children in the wait-list control condition(N=15) and all TD children(N=15;4;3-6;3;SD=.65) could opt for training after completion of research. At the beginning of the experiment, all children had their motor skills, attention, language and communication ability, and gestural recognition assessed. They also took the pre-tests before training in the intervention condition began. In the pretests, an experimenter asked the child, “Show me an action for welcome?”, when narrating stories and gave him/her 10s to demonstrate the gesture. The pre-tests were completed after 14 gestures were tested. Immediate and delayed posttests, which were identical to the pretest, were administered right after and two weeks after training respectively. Generalization pretests and posttests were also administered for novel stories not presented during training. A gesture was considered accurately produced when all four parameters (use of hands, handshapes, movements and directionalities) were correct.

Results: Table 1 shows the task performance for three groups of children. After controlling for the language, cognitive, and motor skills, there was significant time(pretests,posttests)xgroup(ASD,TD)xstory(trained,novel) interaction, F(4,82)=10.91,p<.001,η2=.34. Specifically, for trained stories, ASD children generally performed poorer than TD in the pretests, ps<.04, but ASD children in the intervention condition outperformed TD in the immediate and delayed posttests,ps<.04. However, for novel stories, ASD children performed poorer than TD in the delayed posttest,p<.03.

Conclusions: Early robot-based intervention may reduce the degree of gestural delay in children with autism but its effectiveness is only salient in the trained stimuli. Further study should improve the power of generalizations. 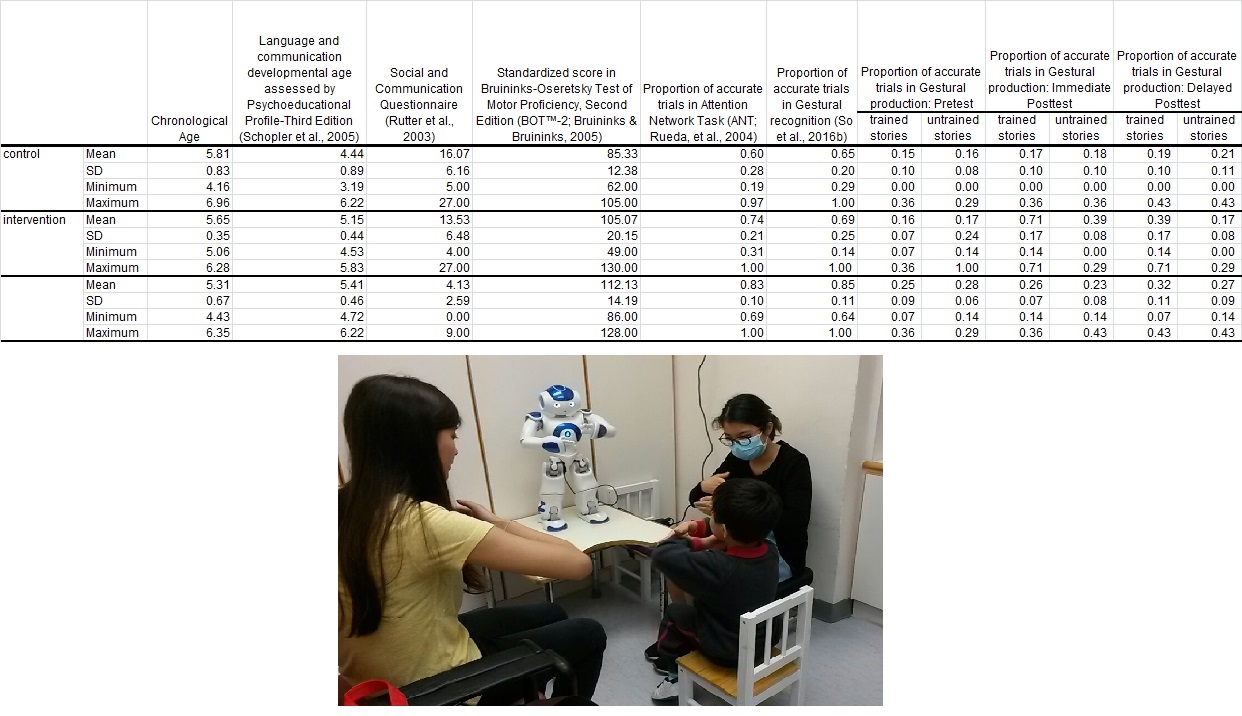