26507
Childhood Apraxia of Speech in Minimally Verbal Children with ASD

Approximately 25% of children with autism spectrum disorder (ASD) remain minimally verbal (MV) past age 5 (Kasari etal. 2013). Many factors likely combine to limit spoken language acquisition in these children. One of them is hypothesized to be Childhood Apraxia of Speech (CAS; Shriberg et al. 2011a), a disorder of movement planning that results in imprecise, inconsistent, and unintelligible speech (ASHA 2007). CAS is estimated to affect approximately 1-2 children per thousand (Shriberg et al. 1997), but recent evidence suggests that it is over-represented in certain populations (Shriberg et al. 2011b, Fedorenko et al. 2015). Two main challenges confront researchers assessing the speech of children with MV ASD for signs of CAS: (1) These children produce very little speech, and (2) Consensus on the signs defining CAS is evolving (ASHA 2007).

Video of 38 participants in a study comparing two spoken-language treatments (7 female, aged 3;5-10;8) was examined for signs of CAS. Treatment study inclusion criteria were: diagnosis of ASD, expressive vocabulary ≤20 words, no productive syntax, and the ability to repeat ≥2 phonemes. To address the first challenge, video of the participants after 25 treatment sessions was used. Each child produced the words “baby”, “cookie”, “daddy”, “mommy”, and “puppy” five times each. Signs of CAS were noted on each attempt, using the operational definitions from Iuzzini-Seigel et al. (2015). Children met criteria for CAS if they showed ≥5 signs from the list on any word. To address the second challenge, an exploratory factor analysis was performed to determine whether the factors underlying the observed signs of CAS grouped into three categories (ASHA 2017) or two (Shriberg et al. 2017).

Preliminary results suggest that CAS is highly over-represented in MV ASD. However, these initial findings must be interpreted with caution because the inclusion criteria for the treatment study may have inadvertently selected for children with CAS, omitting (a) children with ASD who cannot consistently phonate on request, and (b) low-, but not minimally-verbal, children with ASD. Accordingly, we are in the process of replicating the study in a larger group of 78 MV and low-verbal children and teens with ASD (aged 4;4-19;6), using video from administration of the Kaufman Speech Praxis Test (Kaufman, 1994). Figures documenting reliable identification of signs of CAS in both groups by two independent judges, prevalence estimates for the replication group, and the results of a confirmatory factor analysis on the replication group will be presented along with the initial findings. Results will be interpreted in the context of phenotyping studies and treatment design for children with MV ASD. 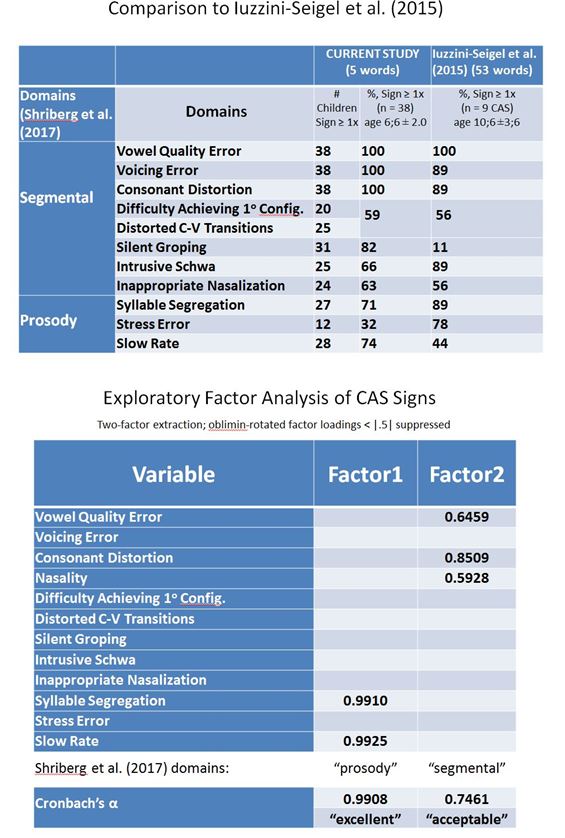