26859
Atypical Influence of Visible Speech in Children with ASD

Methods: Participants were 30 monolingual American English-speaking children (15 children with ASD= 12 males and 3 females and 15 neurotypical children = 5 males and 10 females; age range 6.40 to 14.20, mean age = 10.28 years, SD = 1.98 years). Two types of stimuli were alternately presented with video of a speaker saying the consonant-vowel syllable /ba/, while EEG was continuously recorded; 1) an auditory consonant-vowel syllable /ba/ or 2) a syllable in which the auditory cues for the consonant was substantially weakened, creating a stimulus which is more like /a/. In this paradigm, a visual /ba/ should cause the auditory /a/ to be perceived as /ba/ (a visual phonemic restoration) and cause an attenuated ERP discrimination response (measured with the mismatch negativity; MMN).

Results: Typically developing (TD) children exhibited an attenuated discrimination response (MMN) for as predicted, demonstrating a visible influence of seen on heard speech, however, children with ASD showed a large discrimination response, suggesting reduced influence of visual speech, this was evidenced as an interaction between group and the size of the MMN effect (F(1, 29) = 5.862, p = 0.022, η2 = 0.132). 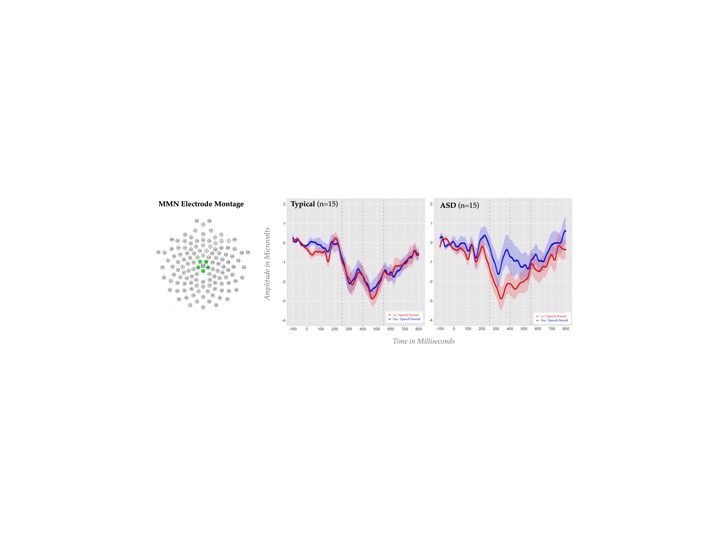