Methods: Twenty young (age range: 2.5-5.5 years of age) and low-functioning children with severe ASD were randomly divided into an intervention group (N=10) and a control group (N=10). The parents of the intervention group were taught to do three kinds of daily activities with their child for 4 months. The activities included encouraging the child to use eye contact for requesting food, toys or physical play activity, and imitating the child’s actions in a specific manner. The training was based on combining behavioural and developmental principles of early intervention. Baseline and outcome measures included observations, questionnaires and psychophysiological measures. There were short-term measurements 4-6 months and long-term measurements two years after the baseline measurements in both groups. Orientations toward the parent’s face (indicative of eye contact) and the state of engagement were analysed from play sessions with the parent in the laboratory and at home. The number of eye contacts was analysed in addition to the information as to whether the eye contact was an overture or a response, and whether it was linked to other forms of social communication.

Conclusions: It seems beneficial to encourage eye contact initiation in young, low-functioning children with ASD. The parent-led eye contact focused training did not only increase the use of eye contact but, importantly, also the state of engagement seemed to improve in the long run. 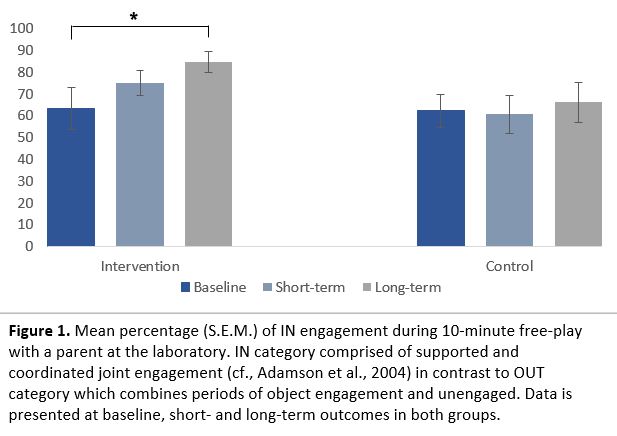