Although past research has provided mixed evidence of the nature and extent of personal pronoun difficulty in autism, children with autism’s preference for proper names when referring to themselves and others along with their experience of a deficient sense of self stand out across studies (e.g., Lee at al., 1994; Tager-Flusberg, 1994; Shield et al., 2015).

Increase in personal pronoun use after the second year has long been used as a reflection of the emerging sense of self in typical development (e.g., Lewis & Ramsay, 2004). Furthermore, mental state language use in autism reflects Theory of Mind (Capps et al., 2000), which is also related to sense of self. Yet, no study has specifically examined the relationship between mental state language as an appropriate context to differentiate between self and others and personal pronoun use as a reflection of sense of self in autism.

We aimed to examine how children with autism refer to themselves and others: using fixed (common nouns and names) vs. shifting (personal pronouns) reference terms, and how this changes across time. Furthermore, we wanted to evaluate the relationship between children’s person reference and their use of mental state language.

Natural language samples from mother-child interactions were collected from children with autism (N = 50) at two (T1: M=27.13 months), three (T2: M=39.63), and four (T3: M=51.68) years of age. Their autism diagnosis was confirmed with the administration of the ADOS at each time point. Other key measures of the children’s development included the Mullen, ESCS, and Vineland. We used the Linguistic Inquiry and Word Count software (LIWC, Pennebaker et al., 2007) to analyze the transcripts of the mother-child interactions by extracting rates (% of total number of words) of the children’s use of personal pronouns (1st and 2nd person singular) and of mental state terms using an established word list (Bartsch & Wellman, 1995).

Contrary to past research, the children with ASD in our study exhibited no preference for common nouns and names over personal pronouns. This surprising finding could be attributed to the use of natural language sampling rather than pronoun elicitation tasks potentially posing different social and cognitive demands. The children’s use of mental state language was related to their use of personal pronouns providing support for the notion that talking about mental states might provide the appropriate context for children to differentiate between themselves and others. These findings demonstrate a new approach to the study of selfhood in autism focusing on the characteristics of speech. 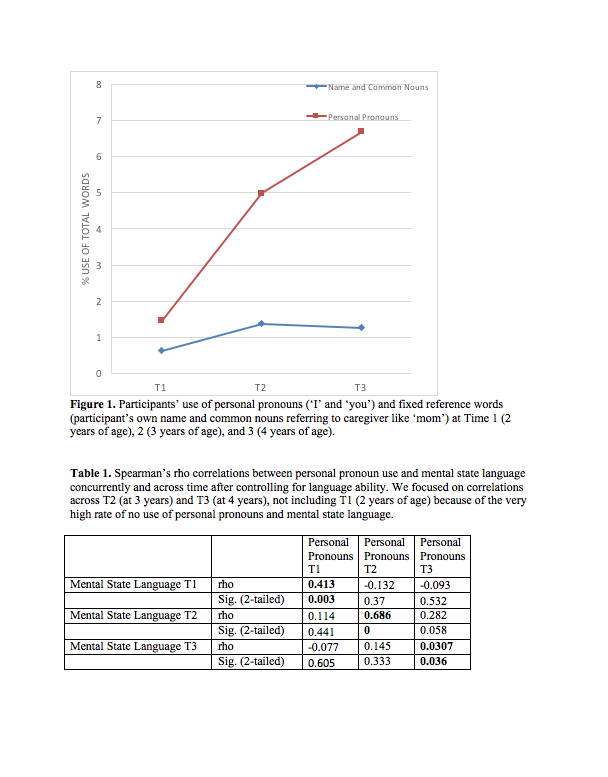