27415
Is Parent Mediated Telehealth Interventions for Children with ASD a Viable Option?

Many parents of children with ASD find it difficult to access quality services, and greater challenges are often experienced by families in rural areas (Chen, et al., 2007). Rural settings are characterized by lessened availability of services per capita, and a lack of evidence-based practices for identifying and providing services for individuals with ASD (Rhoades et al., 2007) which can lead to comparatively worse educational and functional outcomes (Scarpa et al., 2013). One possible solution is the use of telehealth technology (Dudding, 2009; Turner, 2003) to address families’ unmet needs for intervention (Hetizman-Powell, et al., 2014). Telehealth technology allows for specialized services, in real time, over a geographical distance and permits interactive and individualized learning (Baggett et al., 2009). Parent training programs have also been found to be cost effective and ecologically valid way to increase access to evidence based intervention (Wainer et al., 2015).

Computer based database searches of peer-reviewed articles were used to identify studies that met inclusion criteria. Studies were included if they (a) utilized self-directed or therapist-assisted telehealth technology to treatment and assessed outcomes, (b) described an intervention that was delivered by a parent or caregiver, (c) report original data, (d) examined and discussed parent satisfaction and implementation fidelity, and (e) were published in English.

The review of literature produced ten studies that examined parent-mediated telehealth interventions that also examined parent satisfaction and fidelity of implementation. Five of the ten studies were part of two larger studies so original data could only be obtained from two of the five resulting in seven independent studies. All studies showed improvement in outcomes with the parent-mediated interventions. Effect sizes when available from data ranged from 0.35 to 2.41. Fidelity of implementation whether therapist or parent rated ranged from 72 to 97%. Parent satisfaction and acceptance ranged from 72 to 98.7%. Attrition ranged from 0 to 14.2%. Lower satisfaction and higher attrition occurred when the intervention was self-directed versus therapist assisted.

All seven studies report greater access and reach with parent-mediated telehealth technology without compromising the fidelity and quality of the intervention. Parents also reported satisfaction and acceptance of telehealth approaches specifically with regard to access and availability of intervention in their community or home. On the other hand almost all studies were supported by research grants and families were provided with technology (when not available) and intervention at no cost. Service reimbursement could vary depending on state and location. Technological problems arising from internet speed or other malfunctions also posed occasional problems in access, despite these problems, satisfaction and fidelity were rated high. 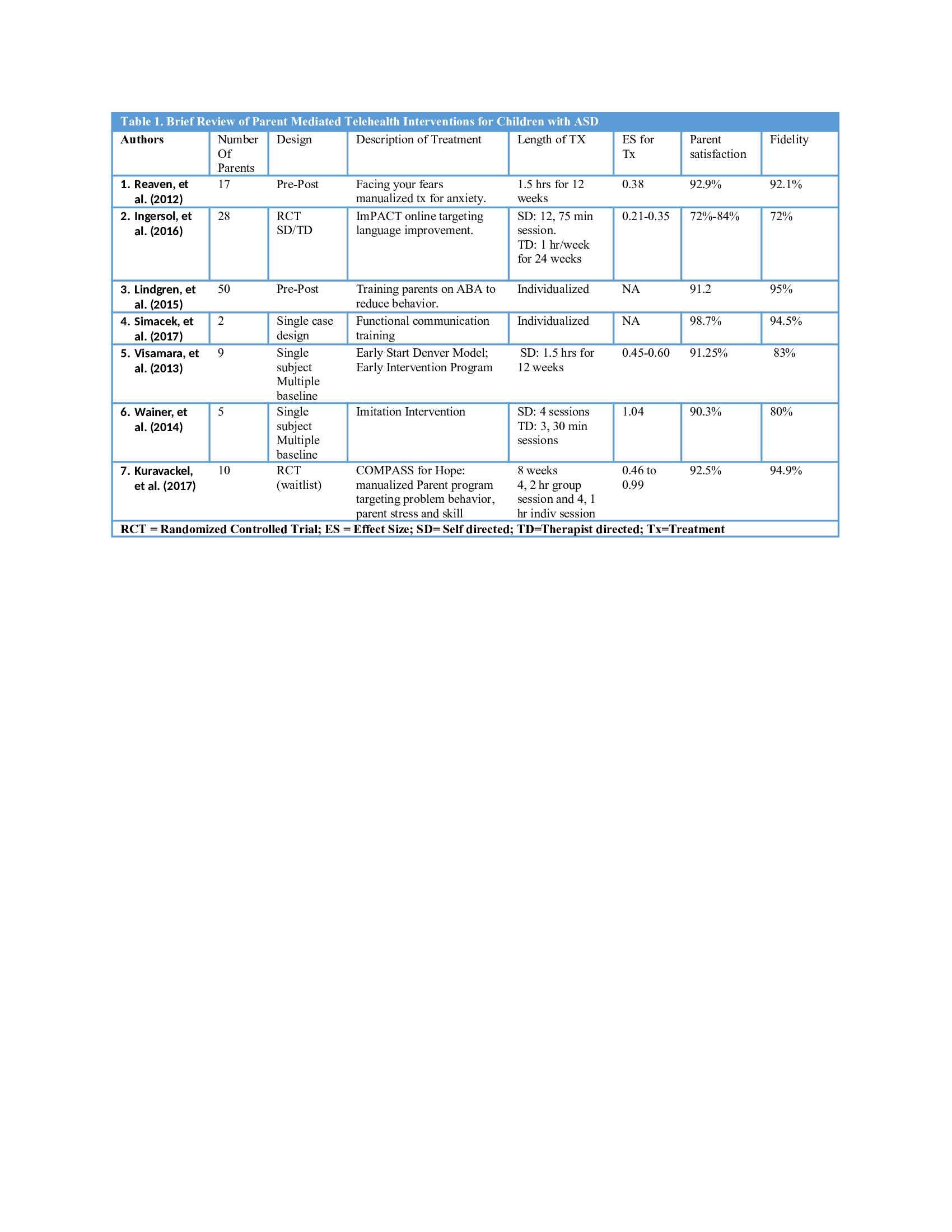