27559
Is the Sky Blue?: Question Asking in Children with ASD

Poster Presentation
Hall Grote Zaal (de Doelen ICC Rotterdam)
A. Netburn1, J. Georgeson1, S. Arunachalam2 and R. J. Luyster1, (1)Communication Sciences and Disorders, Emerson College, Boston, MA, (2)Boston University, Boston, MA
Background: As they grow, children use language in a number of different ways. A substantial amount of research in typically developing children delineates the importance of question-asking for linguistic, cognitive and social development. In autism spectrum disorder (ASD), language development is often impaired or delayed. Although there are a few intervention studies detailing procedures to teach, or train children with autism to correctly use questions, there is a dearth of research exploring everyday question-asking in children with autism. Better understanding naturalistic question-asking in children with ASD would provide clues about opportunities for everyday learning across language, cognitive and social domains.

Objectives: The aim of this research is to investigate the frequency, content, and development of question-asking in young children with ASD.

Methods: This study contains preliminary data from a two-part online survey. Part I included demographics and questions about daily activities. Participants were then instructed to spend time observing their child’s language. Approximately one day later, they were sent an email with a link to Part II, which focused on question-asking. Recruitment is ongoing, but to date, reports have been collected from caregivers with children under 6 years of age; 55 caregivers had a child with ASD (8 female), and 22 had a child with typical development (TD, 5 female). Children were categorized by their caregivers according to expressive language level, including (a) those who spoke at the single word level (9 ASD; 4 TD), (b) those who spoke in 2-3 word phrases (28 ASD; 11 TD), and (c) those who spoke in sentences of 4 or more words (18 ASD; 7 TD).

Results: Comparisons across diagnostic groups were conducted according to caregiver-reported language level. Because of the small cell sizes for the TD sample, non-parametric tests were used. Preliminary analyses suggest that the proportion of utterances that are questions did not differ across diagnostic groups (within expressive language levels; see Figure 1a). However, for children using phrase-level speech, the children with ASD used significantly fewer questions per day than the TD (p=.001; see Figure 1b and c), and a similar pattern was observed for the children using sentence level speech (though it was not significant, p=.05; see Figure 1b and e).

Qualitative review of the data suggests some other important points. First: many more children with ASD (even those who are speaking in phrases or sentences) are reported by their caregivers to ask fewer than 10 questions per day (see Figure 1c and e). Moreover, caregivers of children with ASD report less frequent usage of what, where, when, why and how questions than caregivers of TD children, whereas groups are remarkably similar in their rates of yes/no questions (see Figure 1d and f).

Conclusions: These results suggest that typically developing children and children with ASD approach the developmental process of question-asking considerably differently. By asking fewer questions overall and by favoring dichotomous yes/no forms over more open-ended what, where, when, why and how questions, children with ASD may create fewer and less rich opportunities to learn from their world. 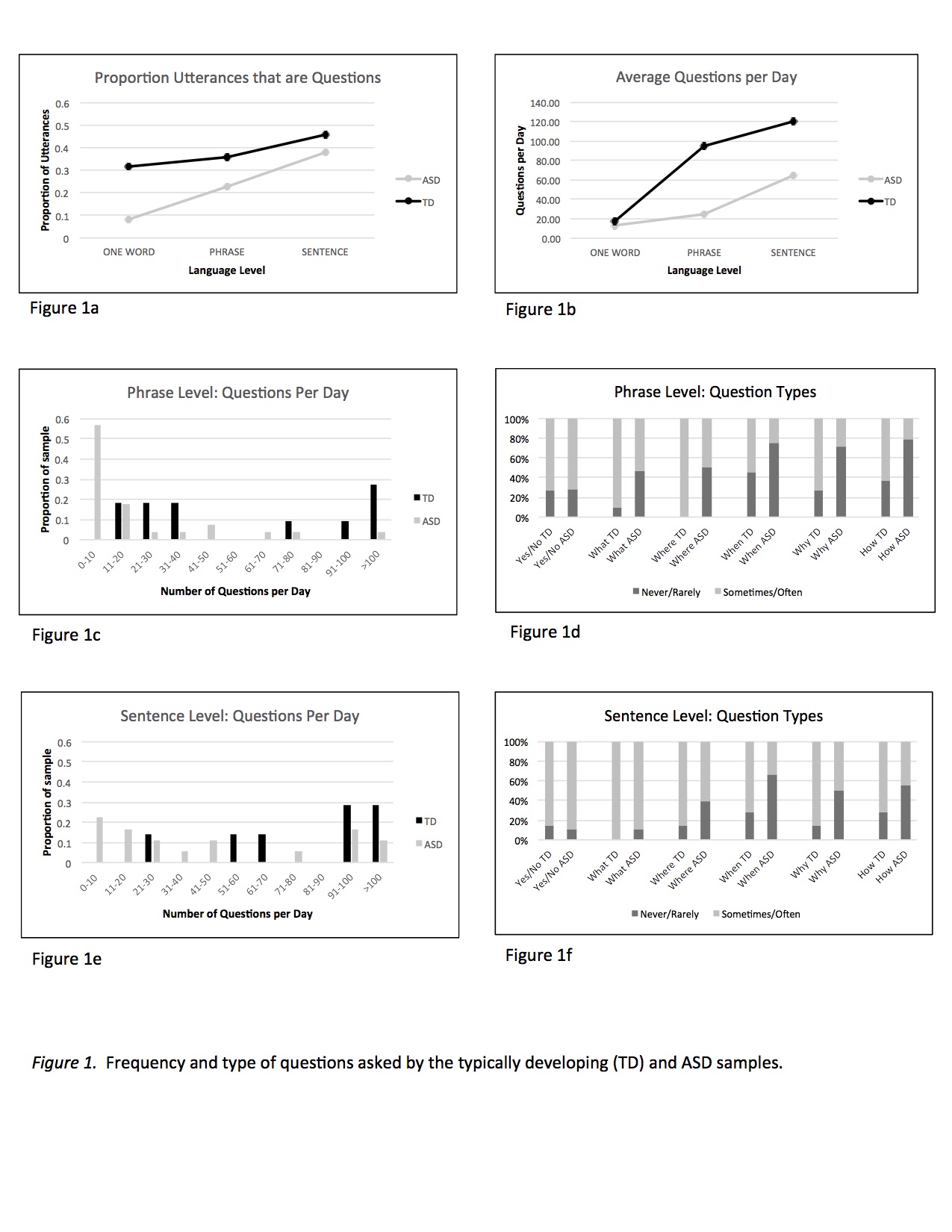