27771
Observing Interactions between Teaching Staff and Autistic Children: Who Communicates, How Often, and Why? a Cross-Cultural Comparison between UK and Serbia

Objectives: To describe and compare child-adult interactions during observations of structured and unstructured activities in UK and Serbian special education settings.

Methods: 16 autistic children (aged 5-11 years; 2 female) from three UK special schools were observed during at least two structured and two unstructured classroom activities, equalling 80 minutes of interaction per child over multiple days (~22 hours total). Observations of seven additional children are ongoing in Serbia. Researchers recorded adult-child interactions every two minutes for a 20-minute activity period, recording who initiated, using what modality and for what purpose. Researchers noted if any supports were used during the interaction, the response from the communicative partner, and any reciprocal interactions (Figure 1). Researchers subsequently recorded a qualitative narrative of the entire activity. Some adults observed were classroom teachers, while others were teaching assistants or subject specialists. Standardised measures of autism severity (CARS-2 ST) were completed for each child (Table 1).

Results: Data analysis is ongoing. We observed 1,238 interactions (per child, M=29.4 child-initiated, SD=24.49; M=47.9 adult-initiated, SD=17.70). 40% of these were child-initiated. While adult initiations most frequently had social or instructional purposes, most child initiations were commenting and requesting. Children and adults frequently responded to one another’s initiations (children 87%; adults 82%). Surprisingly, additional supports such as PECS were used less than 20% of the time. Adults responded more to children categorised on the CARS-2 ST as having ‘mild to no symptoms of autism’ (90% of the time) in comparison to ‘mild-moderate’ (83% of the time) or ‘severe’ (75% of the time). Child mood also appeared to influence interactions, with fewer adult initiations observed when adults had rated children as having a negative mood during an observed activity, versus a positive or neutral mood. Child mood did not appear to affect adults’ responses to the child, and therefore may be due to child bids being more frequent when they are anxious. Additional cross-cultural analyses will be conducted following Serbian data collection.

Conclusions: Child-adult interaction observations revealed that adults initiate interactions more frequently than do autistic children, and that initiation varies with children’s mood. The rate of child-initiated interaction in this sample is surprisingly high, more than double that of previous research with comparable participants and settings. This discrepancy may reflect subsequent positive developments in early intervention and autism practice. Yet, very few additional communicative supports were used during interactions within any of the schools, despite literature recommending such supports as best practice in autism education. 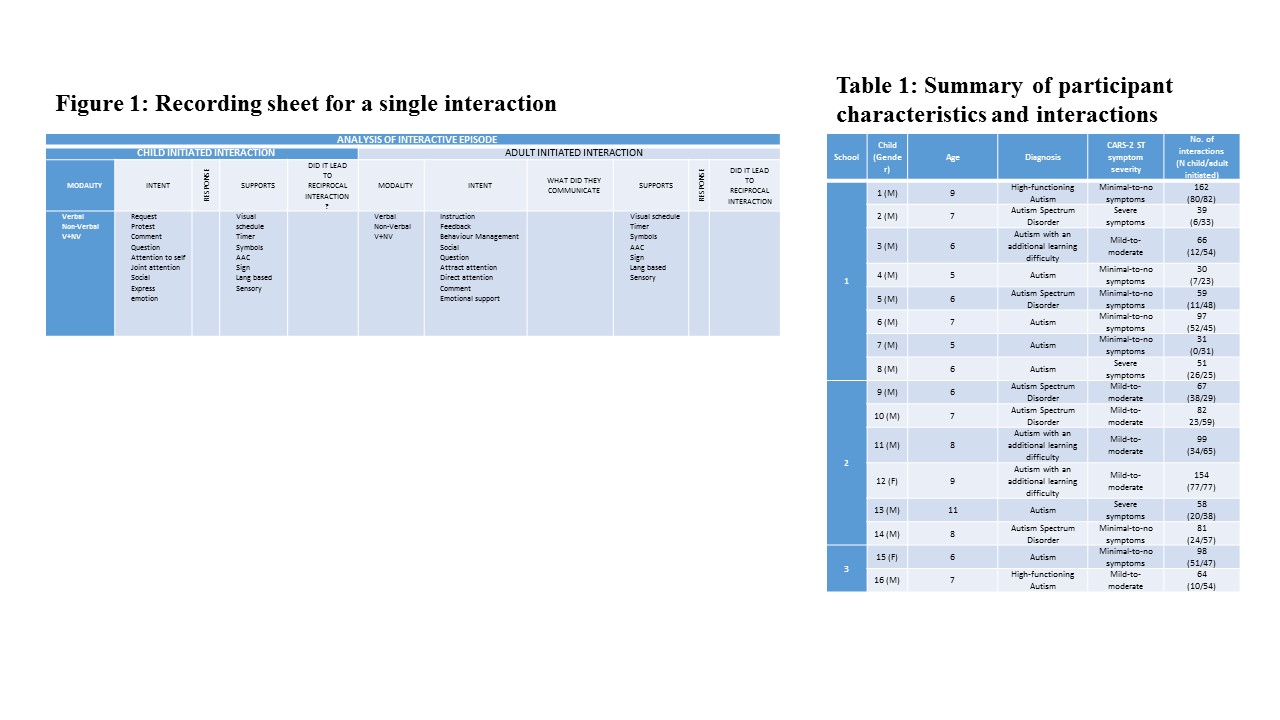